Hey, there. So in the process of making Gearend, I think I’ve stumbled onto a graphical bug. Basically, if you use a Sun lamp that has shadow enabled on an object with Clip Alpha material, and a spotlight on that same object, the spotlight won’t cast a shadow. It’s a real edge case, and it was impossible to replicate - I had to pull it out of Gearend to exhibit the bug.

However, I’m unsure if it’s a matter of my graphics card / driver, or if it’s a problem with the BGE. I don’t remember it doing this, and I’m getting some strange shadowing errors sometimes. Some confirmation on this possible bug would be advised.

I’ll check this tonight and try to confirm, what graphics card and driver do you have?

My apologies, I should have posted that in the thread, haha. I have an AMD Radeon HD 7700 card; driver’s 14.9. I tried the latest beta, and then rolled back to the one I’m using now - no dice.

For the record, the viewport doesn’t show up correctly for me with this example, but it works fine in-game. However, the issue with the viewport is indicative of the issue I’m experiencing with Gearend. Basically, the sun’s shadow “overwrites” the spotlight’s shadow, and so only sun shadows work in Gearend. I’ve tried to distill the issue down to a simple blend file as best as I could, which is what I have here.

For me it’s the same in and out of game: both shadows showing correctly. (Running on a radeon 7670M with 14.9 drivers. Mind you, aticonfig vanished a month ago, so I’m not entirely sure what’s happening with my graphics set up. It could be running on an intelHD4000, which my laptop also has.)

However, there is a compound shadow problem I’m currently trying to replicate. It seems to be that sometimes when you have two intersecting shadows and a light, the shadows massively overpower everything where they intersect. I think the reason I haven’t been able to replicate it is because the lights have to be added in from a hidden layer for the problem to manifest. It could be something like that for you as well (behaving differently if they are added)

I’m not sure, but it seems to me that there’s nothing wrong. Removing the Sun Lamp will show that the shadows are produced by the Spot Lamp itself. 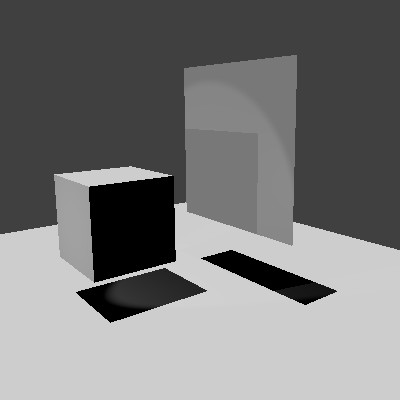 Both shadows showing correctly for myself aswell, - AMD Radeon 7900.