Yukon, has the current version of Graswald been uploaded to the Blendermarket with the new models? Thanks

It’s up! Feel free to check it out and tell us what you think.

Hello.
I have two computers and I need to render in one of them which is 4x faster.
The problem arrived with the different versions and Blender 2.80. And the other hand is that this is huge project of 800GB size.
Blender doesn’t display well which version of Graswald I have installed hence it’s hard for me determine which is the problem between two versions.
I created 3 ecosystems with vegetation and it seems that the backwards compatibility between versions is not ensured because when I open the scene in the second computer with a different Gaswald version Blender shows me this: 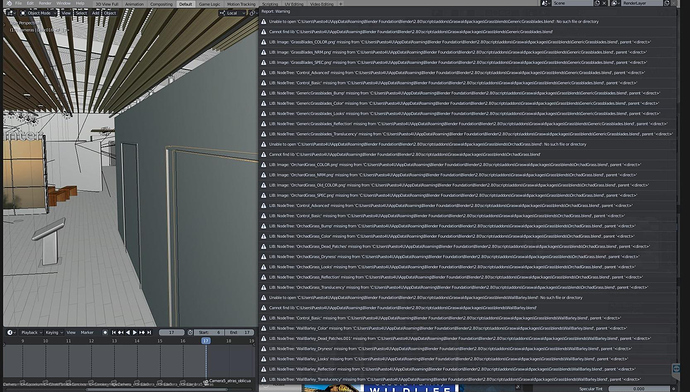 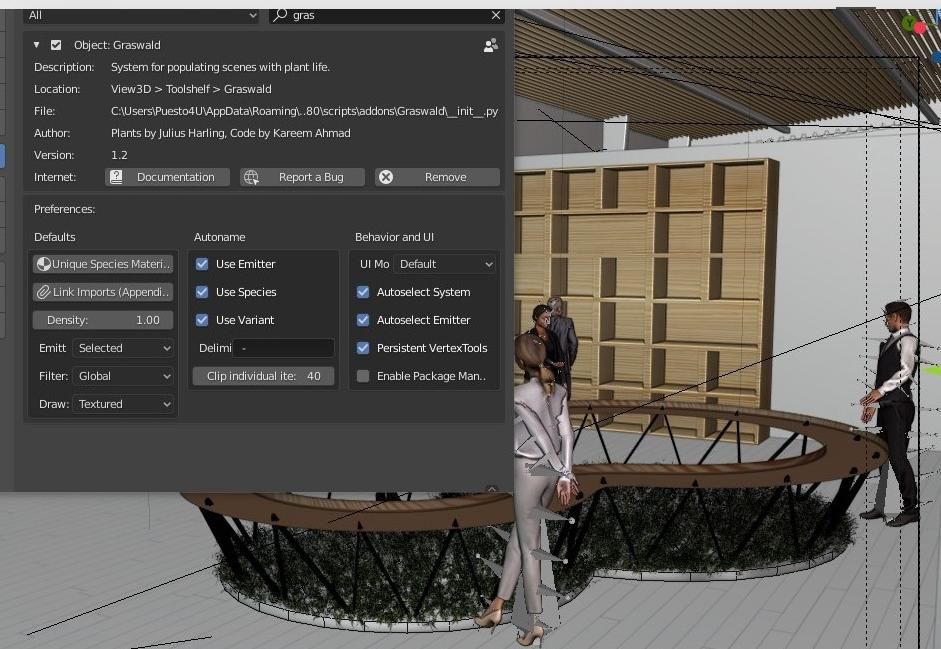 image.jpg941×649 158 KB
Which is this version in order to keep the same versions between both computers?.
I think that if I can’t keep in both computers the same version I will have to install the latest version in both computers and create the whole three ecosystems in both computers.
Besides, it’s a special situation because in the summer I’m out of home (where I have a very wide bandwidth) and send the whole scene of 800MB can be very painful.
What would you do?. I think the best solution would be to install the same version in the second computer than the one in which I created the three ecosystems because it’s clear that the latest version can’t manage well creations with former versions.
Any idea?.
Kind regards and thanks in advance.
Jose.
KareemAlgalaly (Kareem Ahmad) August 25, 2019, 9:59pm #505

Since you are working with blender 2.8, I would seriously recommend installing the latest version of graswald. The first betas that came out for 2.8 weren’t fully compatible with it, and they had some hidden bugs that can make things a pain later on. That along with the fact that them newest version isn’t backwards compatible, and won’t be for a while, is more reason to upgrade now. Graswald is typically compatible between versions, but between 2.79 and the first 2.8 betas, and the ‘graswald ii’ betas, I decided to break backwards compatibility to fix bugs that were a result of the structure of Graswald’s implementation. The new structure should last us a few years, and while I intend to add a mode/method to allow the new graswald to read from the old one, I’m not sure how long that will take.

According to Gumroad, the latest , (and stable?) version should be…?: 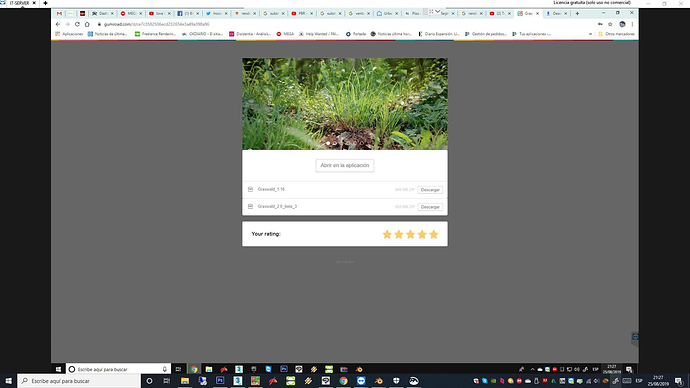 Besides, There are a lot of elements of Graswald in the origin of the scene and this could be the guilty of the super-size of my scene in Hard Disk (and it makes exceed the 500MB limit size in Sheepit!, the free renderfarm and I can’t upload it to Sheepit!) and I can’t use my GTX-970 because of lack of memory (I thought that Blender 2.80 could use the RAM memory system)…
If I delete this objects, does the scene still be rendered well?. I understand that these can be the elements to be repeated internally in its particles-system, but maybe not and they are residual elements of deleted Graswald vegetation systems. This is the inital graswald to 2.8 port, (the very beta buggy one), so I am not quite sure, they could be the ones from the actual systems. To be safe, I would throw them into a collection, and disable that collection from the viewlayer.

As for memory, you can switch to lower (High -> Med is the biggest jump in performance with the least loss in detail) resolution textures, as most of the memory used by graswald, is in fact from the textures.

I’m trying to append collection with graswald vegetation from a file to a new one but the Graswald tab results empty so I can’t manage my plants.

Is there a way to continue in a new file the managing of Graswald previously started in another one? I supposed Append was the right way.

See the attached image to understand.

p.s.:the slot in the Grasswald’s System tab exists, but is empty like invisible.

For now, appending entire scenes works as expected, I’ll try to see how to get appending objects to work nicely.

Scratch that, found a bug where if you add an object to one scene, while you have graswald systems in objects that are selected in other scenes, all those other objects get purged. Working on a fix, and an easier way to make appending work. Nearly there.

I’ve got everything but physics working across scenes, should be good in a day or two.

Hello,
I have just purchased Graswald for Blender 2.8 (Graswald_2.0_beta_3.zip, version 1.2) and I can’t figure out where I can change the quality of the texture. In the material settings part, I only have the high material version (RibwortPlantain High Cycles/Eevee for example). I am pretty sure it is obvious but I do not see it.
Does anyone know where it is ?

Be sure to check “Show Advanced Settings” just little down on the screenshot you posted.

Created this topic. Hope it can improve further devloppement of graswald with auto cluster, color variation and terrain displacement ?

Hello. I spend maybe 4 hours this morning working on this meadow (only shading and particles) i just want to make a topic speaking about the subject After reading this article here below tried my best to recreate this exact scene in blender. And this is the result: [Test%2001%20-%20Copie] [Light] [Test%2001] Important steps: mave a bunch of different variety of grasses/leaves/clovers… ect make sure to have different model of your grasses, some in clusters, in different sizes and rad…

Thank you for your quick response.
Even if I check the “Show Advanced Settings” box I do not see the quality settings. And the choice for material is still the same (only high Cycles/Eevee). 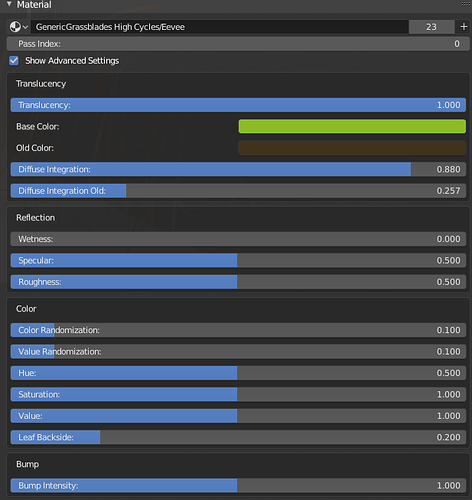 I’ve had this problem too, rendered my last project with high material just because I couldn’t find the lower quality materials.

I think I found it (not sure).
It is under the “Display” tab, in modifier settings (need to click the icon), then there is a “Mesh resolution” slide bar from 0.00 to 1.00 (1.00 is the default value).
So the name of materials in the “Material” tab is misleading since it supposes there are other types of quality (high / medium / low), whereas it seems it’s not.

You need to click the + button on the right, and choose the type of material you would like to load.

The drop-down that you clicked is for choosing from the materials already in the file: say you have two versions of the high material, one that is aged, and one that is young, for two different systems