Hey Jan
I am very sorry for the misunderstanding. I’m grateful, that this worked out now. But I want to straighten something up:

You would have kept the discussion in PM with faked renders to tell me wrong and it may have worked.

This is simply not true. I want my product to be working and fine, and I am open to constructive criticism. The whole process of creating the add-on was documented in the focused critic’s thread because I want the community to be involved to make the product as good as it can be. It really shocks me, that you think I lied to you, the renders I have posted were simply from the blend file. As I know you won’t believe me anyway, this is a video of me opening your blend file and hitting the render button as you suggested. Of course, you can now say, that I edited the video if it’s so important for you, we can have a skype conversation, where I can show it to you live…

There is no reason for me to lie to you because this problem would have been noticed by others and that would have caused even more problems. The issue your developer was mentioning is probably right, in my case though, it was not as strong as on the images you posted (as you can see in the video) so that I didn’t think that that would be your problem (as my flowers just didn’t turn white).

We all told you there is no problem because we could not identify one, I sent your blend file to all our tester and there was no complaint whatsoever. I am deeply sorry for the discomfort, but it feels very frustrating and unjust, to now blame us a liar or similar.
We will work on that issue for now, if you have suggestions on how to fix it, or any other questions feel free to ask (also here, if you want to, then there will be full transparency.)

I hope the next time there is an issue like this, it would be possible to just settle it maturely and not by blaming each other. We do what we can, and I always told you that. Next time, if you have identified an issue (which we weren’t able to do), simply tell us what you think it is, and then we can constructively take a look at it.

Is this ok for you now?

i love to see bushes in your addon. For example it could be drawing line with grace pencil and addon would convert it to vertex mesh and place bushes on vertex. this would be great for hedges. Next step could be trees. You should make your addon a solution to making gardens for architecture renderings.

Edit: most problems fixed in 1.14 (Automn Awkbit and mosses still have issues).

As I mentioned in PM it was a very unique situation that revealed the issue, 128 bounces is a lot. That + the strong hdri is what revealed the bug. Without that many bounces, the issue does not come up. Also, the blend your sent me included the hdri you used (unlike the one you sent Julius) and hdri was critical in this case.

Yes there is an issue, yes it is being fixed. And let’s try not to antagonize, there was a misunderstanding.

My position did not change when a cycles dev was mentioned. It ‘changed’ when I received a .blend. It was obvious there was an issue, I simply knew not where.

Just curious … can these products react to wind and breeze … and can they do so in other programs like 3ds Max?

Not officially yet, you can go into particle system settings and enable hair physics, but there is no Graswald way of doing it as of now.

We are looking into it, of course, but it will naturally take a
decent while before a dedicated physics update is released.

As for 3DS max and other software, I am unfamiliar with them, and it is Julius who is making the fbx version, so he is better equipped to answer that question.

You can import the models as fbx files to 3ds Max and then with their internal settings let them be affected by wind etc. A special support in that case for wind effect in 3ds Max is not planned, though.

Great plugin! works like promoted for me! just testing your addon: 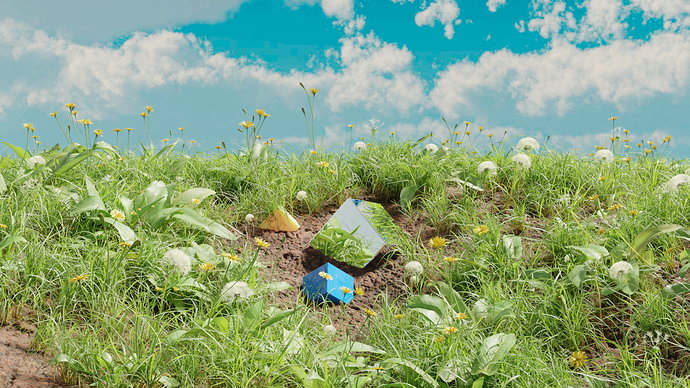 loading same scene into 2.8 i realised much better viewport performance. In 279 iam almost unable to navigate in 3d view all assets switched to visible but in 2.8 its very fluid.
Are there any plans to port gw to 2.8 when ready?

What HDR are you using there? I love the clouds and colors.

By the way, are there any plans to allow users to add custom models? Even if there are not several detail levels, etc.

@dave62 When there’s a stable beta version available, we will probably migrate

i used this one:
https://www.turbosquid.com/FullPreview/Index.cfm/ID/659727

@dave62 When there’s a stable beta version available, we will probably migrate

It is finally there: You can now get the Graswald Asset Library (just the assets) to use in your favorite 3D application on gumroad and the blendermarket! 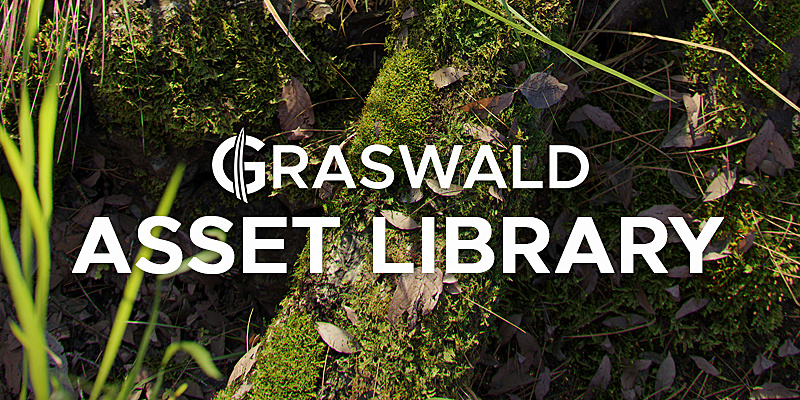 It would be very cool, if you could share this with other people, who even might not be blender users, so we can get more people to use it

Graswald is a professional high-quality asset pack containing different species of weeds, grass, and moss as well as various kinds of debris.

If you are a Blender user, be sure to take full advantage of Graswald's powerful blender integration!

This version is for everyone, who's not (primarily) a Blender user, but still wants to enjoy Graswald models in his/her favorite 3D application. 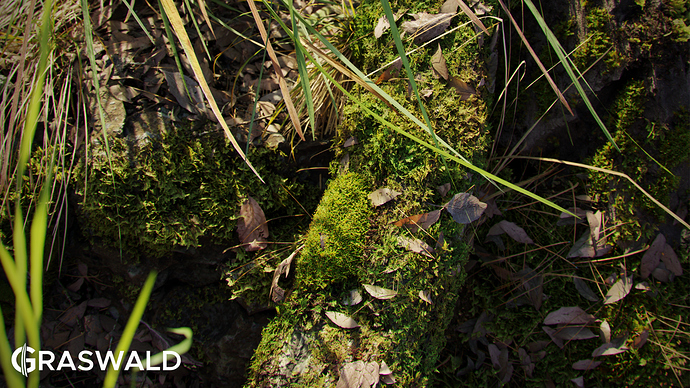 For example, if you want to add Ribwort Plantains to your scene, you can either add big plantains like you'd find in a meadow or the smaller variant that might grow in your lawn. You can also support them with the fitting plantain flowers, or some dead plantains, that are decaying below. 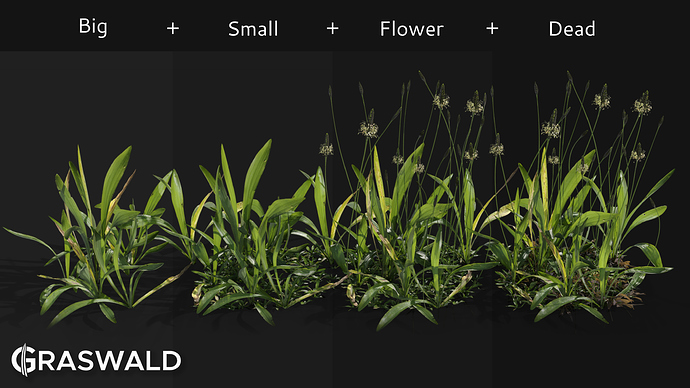 Get the Detail you need!

Every single asset was carefully modeled with reference to the structural details of the real plant. With Graswald, you'll get photoreal grass with visible nodes, sheaths, and collars or weed flowers with visible ligules and stigmata, allowing stunning detail that even holds up in close-up situations and micro shots. 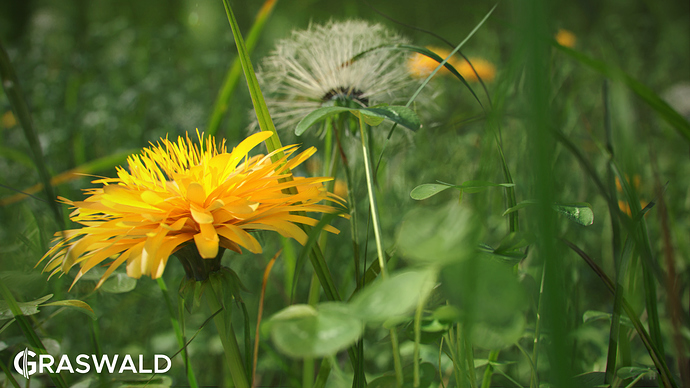 The high texture quality, when combined with a PBR shader, ensures that the assets will always look great in every lighting condition! 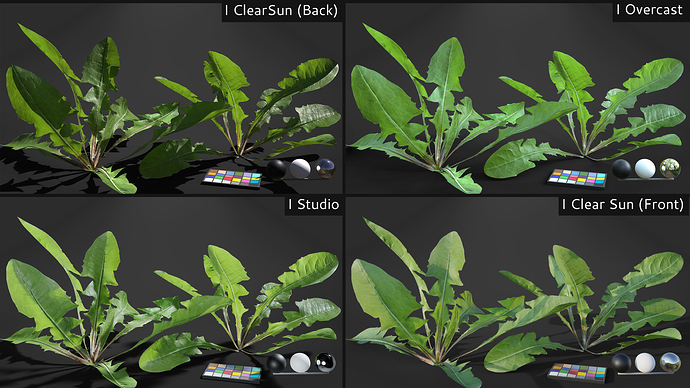 Graswald doesn't only provide green grass blades and a few weeds. Adding dead leaves, (dead) moss, sticks, pine needles and other scatter debris lets you build environments from the ground up that look photoreal and are highly customizable.

You can between a total of 79 different variant groups consisting of up to 69 model variations per group. This is an example of how you could use them: 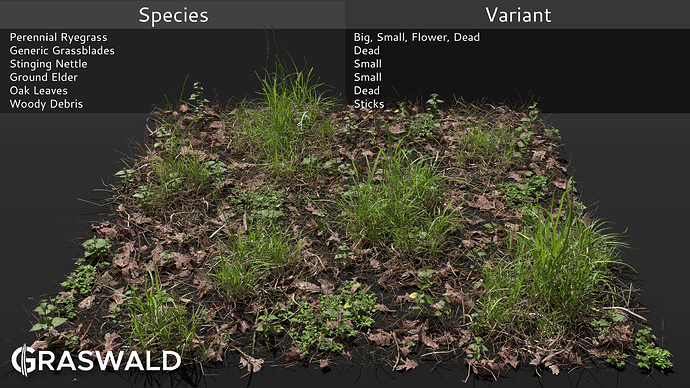 All in all, you'll get a total of 663 different models, allowing an incredible amount of variation for your nature scenes. Here's a list of all the included species:

Optimized in every Way Possible!

The High texture quality is perfect for close-ups, featuring transparency and the highest texture resolution (up to 4k).

The Medium texture quality works well for larger scenes, where the plants aren't the focus or where faster rendering is needed. No transparency and a map resolution of 512px make this texture optimal for people with no time or loads of expensive computers.

The Low texture quality makes scattering huge areas much easier. With no transparency and a minimal texture size of 16px, you don't have to worry about investing in detail that won't be visible in the final result, thus resulting in very fast render times. 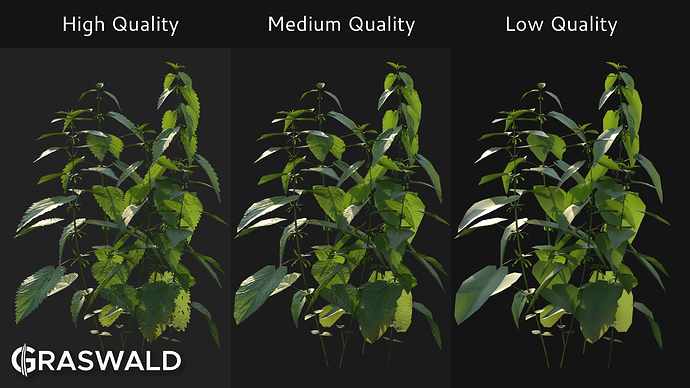 Furthermore, all assets have been modeled with optimization in mind, meaning that each model only has the number of polygons that are needed to achieve photorealistic shapes and shading.

How are the assets being shipped? 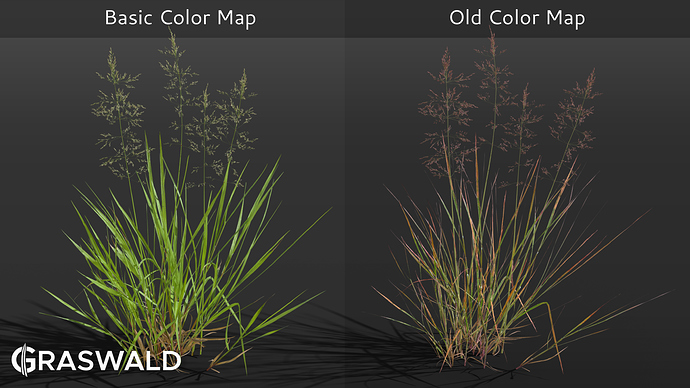 Still not convinced?  Then listen to these fine guys: 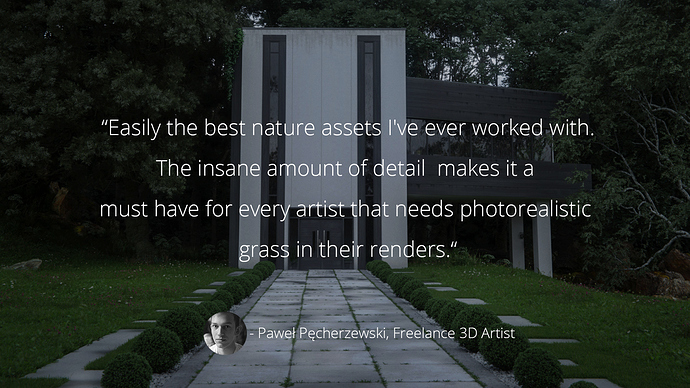 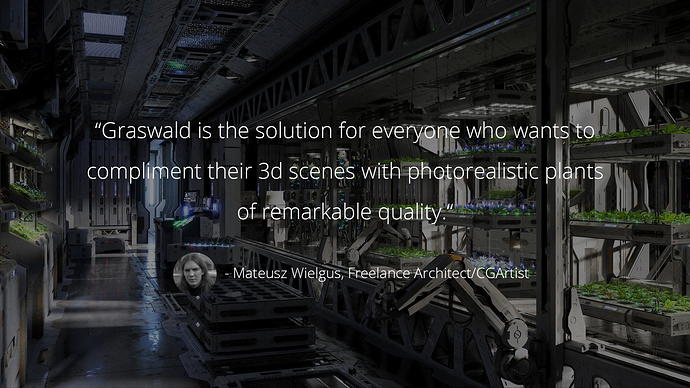 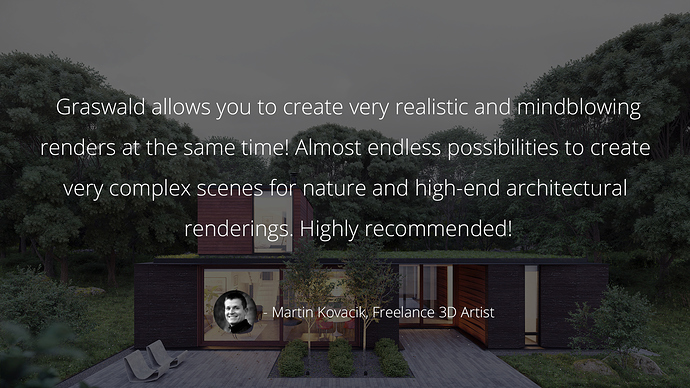 Does the full version have all the assets and can they be used in other 3d and cad programs as well. Are they also in fbx format? Is it possible to convert them to dae and would these import into Chief Architect. Or is obj a better format.Thanks, Yukon

What do you mean with full version?

Nice.
Royalty free means i can use this for commercial production and modify those assets as i want?

I just installed Graswald and I noticed that the version reads 1 instead of 1.1.

Could you make an asset pack so the plants and grass can be imported into Chief Architect? Out of these 3d formats …dwg,dxf,obj,3ds,stl,skp and dae… which format would work best? I’m not 100 percent certtain but I have found that obj imports objects the best in my experience. Would this import textures as well?Thanks

@bkjernisted You can, of course, link the assets to your scene and then export them as whatever you want

I have not much experience with Chief Architect, but you as I mentioned, you can export all of the assets yourself. You can also inside the zip file go to the packages folder where all the blends are, and then export the assets you want from there!

@Orga Jap, as long as you don’t resell the models