I’m new to Grease Pencil, and trying to figure out if I created Actions incorrectly, and also gain better understanding how Actions are stored (i learned from docs they are DataBlocks). *Please note I am Not dissing Blender, just trying to wrap my head around correct steps & architecture/concepts.

My project consists of a Collection of Grease Pencil Stroke objects, like Head, Mouth, Ears, etc that make up a single character. I also created an Armature which is a child of Scene Collection. I’ve parented the Stroke obj’s to the Armature and used Vertex Groups to successfully have IK, Deformation & Ctrl bones move the character’s Stroke objects.

Next created some Actions for the Armature and they work (thank you Blender! you are Awesome): using these steps > Object mode selected Armature, in Action Editor use New btn to create/name new Action, then Pose mode to set keyframes for individual Armature bones. My assumption was the Actions would somehow only be DataBlock children of the Armature.

In the 1st screenshot (the NLA) the “HeadTurn_Up” Action Strip / Track is under the first Stroke obj in the GP Collection, even though the Action is all bone keyframes. Actually the various bones from the Action control several other face Stroke objects, and not the Head.

When I checked Outliner, it shows the same relationship (if New btn is selected in ActionEditor) and the only Animation children of the Armature are NLA Tracks (makes sense those ones are there). Then if I scroll through the Actions stack, that next Action name shows up as a child of the 1st Stoke obj, and also under the Armature (both places): 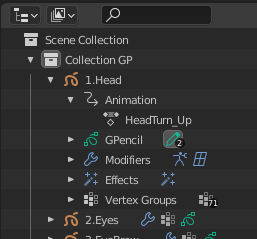 Back in NLA, if I have Armature selected, and choose the “HeadTurn_Up” action from the stack, now the Action Strip/Track shows up under both Stroke obj & the Armature:

Not sure if my explanation makes sense, apologies if not. I guess what I’m saying is, I haven’t created Actions animating Stroke object Layers/lines or tweening verts; so far just keyframed Armature bones. Not even sure why the Stroke “1.Head” object showed up in the NLA… and is it normal that an Action shows up as a Track underneath the Stroke & Armature?

Happy to receive any insight / advice.

I think I am figuring out my issue.

I must have Obj mode selected the Head Stroke object and had an Action from the Armature selected in the Action Editor, making the Head inherit the Action(s).

To resolve:
in Obj mode selected Armature (name turns orange), then without making Head object a selection, in Outliner I expanded Head Stroke obj’s child properties, next in Action Editor (Armature is selected so using it’s context) and selected the mistakenly shared Action from the dropdown list. In Outliner under Head the mistakenly inherited Action was displayed, I right clicked on it and chose “Unlink”, and the Action is now only tied to Armature. Perfect.

In terms of my other question, what is the parent of the Actions, at least for the one’s I’ve created I think maybe the parent is Current File. In Outliner, on the top bar the 2nd button is “Display Mode” which by default is set to “View Layer”, if changed to "Blender File"mode the view changes to the various object types. Actions is the first obj type; others are Cameras, Collections, Materials, Meshes, Scenes (with at least one default Scene child), among other types.

I see now I was incorrect thinking my Armature would be the Action’s parent. Actions are saved in a way that allows them to easily be shared by multiple objects – if the objects share the same properties such as Scale, Rotations etc. Very clever!