Hello, I need a little bit of help with UV Unwrapping, I can’t quite get the hang of it and I want to make a texture for this weapon I’ve created. I’ve followed a bunch of tutorials but I have yet to find anything helpful on seam placement and whatnot. 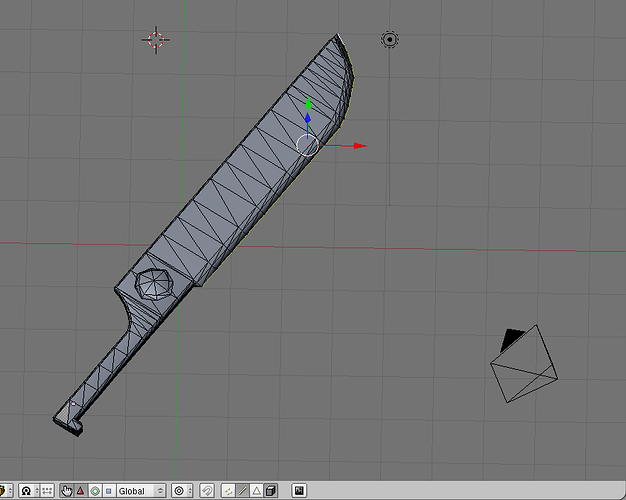 That is a lot of triangles. I’m not good at texturing but I know enough to know that unwrapping that knife is gonna be a mess if you stick with all those triangles.

Whoa, that’s a CG artist’s nightmare, look at all those triangles! go to Mesh>Faces>Convert Tris to Quads.

The best place to add a seam is where you wouldn’t notice the join as the two edges of the uv Image meet or where the material colours change. Although you can use texture painting to hide the seems it is easier to not have to. For more complex models you also need to consider how the model will unfold onto a 2d surface with minimal distortion.

In this case along the blade edge and optionally around the end of the handle.

WOOOO! TO MANY TRIANGles!
Ok, look, I am going to give the grestest tip ever for texturing,
tab, then select all the verts from the view your looking at( hit b once or twice I believe to get the circle select tool, occulude background geometry also!), hit u, then hit project from view, What is this? It unwrapped in the direction you were looking! now uv map(look it up) and texture it!

Only do that if you are facing the selected faces directly. Otherwise you will get stretching. And you don’t want that.

And yeah, try to build your meshes in quads, they’re much easier to manage. If they have to be tri’s in the end you can always convert them when your mesh is done and unwrapped (using Ctrl + T).

Ahhh, I was working with triangles because I was working on a mod for torchlight, and I noticed all the models were compiled with em. I didn’t know whether I should do that or not.

Thanks for the tips, I greatly appreciate it.

Another thing, I rotated the knife oddly on accident and saved it. Is there any way of resetting the position without an hour or so of moving it pixel by pixel? I don’t want to end up having to remake it again, since the current version is my 3rd try this week because of all the trouble I was having with UV Unwrapping.

Also, I should mention that this is my first real project, I haven’t done anything other than the tutorials on the newb to pro wiki book.

Another thing, Torchlight textures are 256x256, and are symmetrical on the UV Map, meaning that its only textured for one side of it and the other side uses the same textures as the main one does. I do not know how to do this.

As for using tris over quads - quads are preferred during modelling because some of the modelling tools such as adding/selecting/sliding an edge loop don’t work through a row of tris. Also the edge flow is easier to see with quads giving a better idea of how well a model will deform in animation.
I think most people overreact to tris in a model, but it is considered better form to model using only quads.
When it comes to rendering - tris can cause artefacts during animation, but are normally used in low poly game models to reduce processor time. Game models are often made in quads then converted to tris when finished.

As for UV mapping - the easiest way is to add a seam all the way around so that the two sides are totally separated and then placed on top of each other on the uv image. Checkout this tutorial which shows placing the uv’s over each other so they use the same texture - and in this case fitting more onto the one uv image.

Dude, just a suggestion about the knife’s shape, I think the blade should face the other way around. Because right now it would be very odd position for the hand who trying to use the knife. The handle should align with the non-sharp part of the blade.

Here’s what I did with your file. I converted all the tris (I think) into quads, and then tried a seam, but I don’t know if it is any good, so I’ll let you check it:evilgrin:. 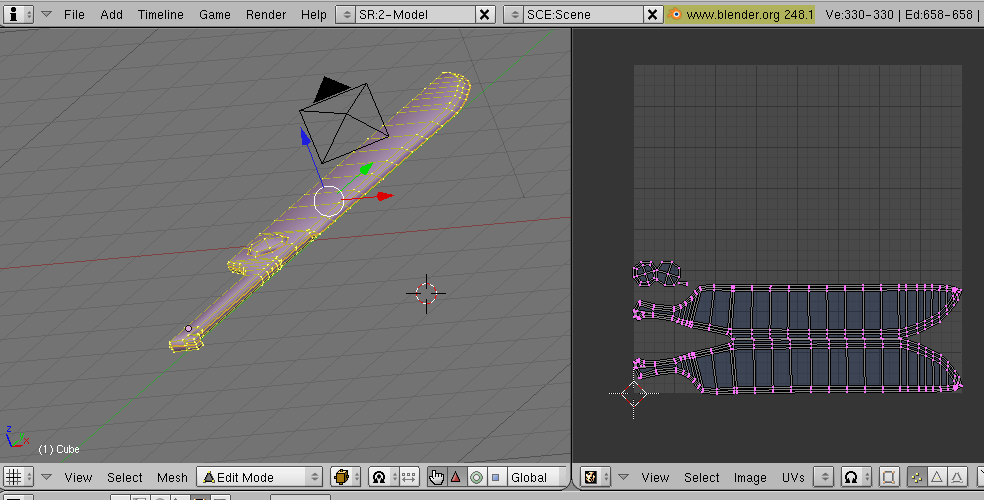