I have been trying to get the my green screen all set up and I am almost there. I was wondering if anyone could help me finish up as I am super close of finishing. 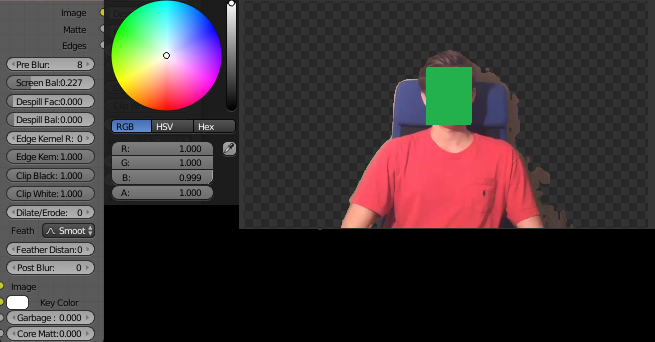 As you can see my green screen was not super green so it would not work properly. I managed to get it down to this but I still need help with the right side. Any help with mean so much to me because I am so desperate here! Thank you!

I’m not sure exactly what part you need help with, but hopefully this will help… Make a second node that gets rid of the brown that’s still present on the right. A Color Key might work or just another Keying–play around with values until its good. You also may need to manually draw a mask around the hair since it looks similar to the brown.

Multiply the mattes from all your keying nodes to get your final matte. If necessary, add more keying nodes and multiply their mattes as well. Use the Set Alpha node with the movie as Image and the final matte as Alpha.

What does the original image look like? It seems you are keying an almost pure white color, was your screen white or just with very low saturation?

Brown on the right is probably despilled screen. It would be easier to fix the matte than trying to key that part as “brown screen”. As KnightsFan suggested, make different mattes if necessary and combine them to produce final matte.

Multiplying them all together isn’t probably the thing to do as multiplying gives you the intersection matte (smallest shared part as black in any matte turns result black). Better multiply each separate key with its own garbage matte and join them in the end with MAXIMUM.

To fill holes in the matte you can make a core matte: expand and erode the matte to produce a slightly smaller solid matte and MAX it with original. This fills the original matte’s “core” but keeps edges intact. Just make sure you don’t make core matte so smooth that it overflows the original edge in concave corners.

Also, it is usually easier to manage if you treat the despill and matte separately and join them in the end with Set Alpha as previous post suggested.

Brown on the right is probably despilled screen. It would be easier to fix the matte than trying to key that part as “brown screen”.

Definitely, if this is indeed the despilled result.

Multiplying them all together isn’t probably the thing to do as multiplying gives you the intersection matte (smallest shared part as black in any matte turns result black).

The smallest area of matte is desirable in this case. One key removes (for example) light green, the other removes dark green. Multiplying them results in both light and dark green keyed out.