I’ve seen this question asked by a lot of beginners, and it sounds like there isn’t a option to group a lot of objects in the Outliner. So my question for you more professional Blender users is How do you organize and clean up your outliner? I’ll give a very simple example and I’d like to know what the professional way to organize this would be.

Say you have a standard scene going on with some characters and environment. But on top of that you also have a bunch of 3d stars that are floating all around the characters. The stars are all slightly different, with different materials, and you want to be able to continue positioning them easily by grabbing them as you work. Everything is fine, but look at the outliner, it’s completely cluttered with “star1, star2” etc! (I will attach a quick image example for basic demonstration) 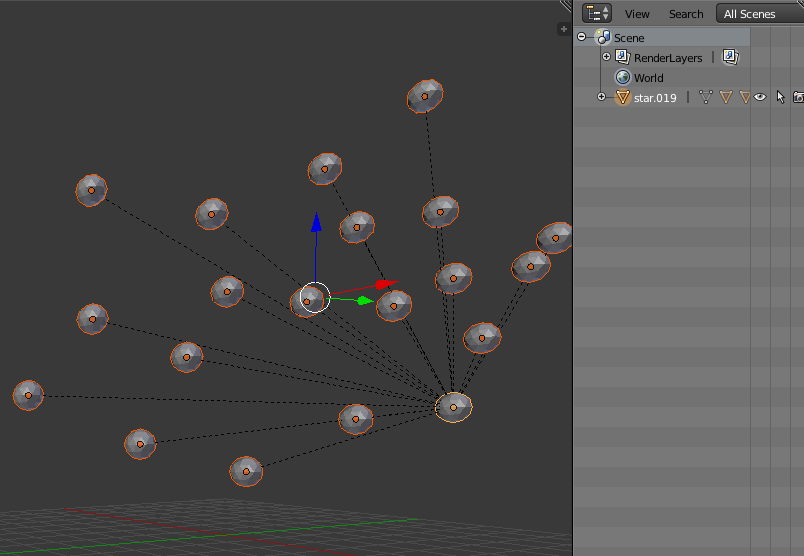 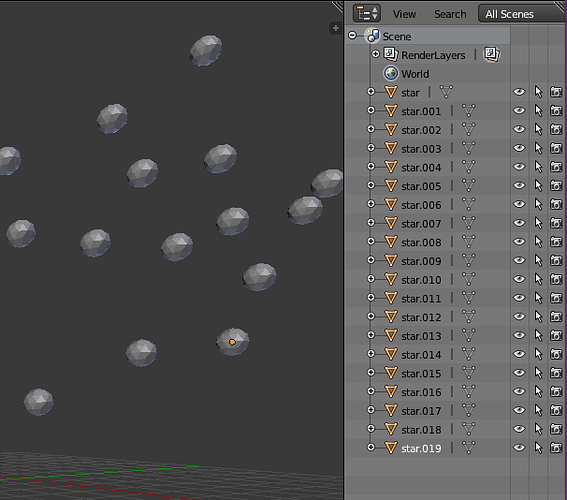 In a lot of software, Maya, Unity, etc, you can group these in a way that you can have a group of “stars” which is labeled in the outliner. However in Blender there doesn’t seem to be a simple way of doing this.
One option is “Group”, which I thought was perfect, until I found out you have to go to a special view of the outliner in order to see the groups in the hierarchy, plus all of your non grouped objects disappear!
Then I learned about parenting, which is helpful in many situations such as a car which has it’s wheels parented to the body, etc. However, the parenting method doesn’t work well when you are just trying to clean up your outliner and use as an organizational technique. In my example scene described above, the stars would all have these lines shooting out of them, totally cluttering up your scene with a ton of random lines everywhere. Therefore the Parenting method isn’t a great option to organize the object either.

Is there another method that people use to stay organized and have a clean, logical hierarchy in their scenes? Maybe there is an aspect of one of the methods I described that I am missing? Or perhaps Blender users just get used to have really long lists of objects which they can’t really clean up?

I have been curious of this for a long time. Thanks for any insights!

You can use remove those messy lines by turning off the Relationship Lines option in the Display panel of the Properties shelf in the 3D viewer.

Parenting objects is one way to hide objects in the Outliner the way you want. Just create empties to put your objects in and give them a distinctive name.

You can also put objects on different layers, then set the Outliner to Visible Layers. Then when you make the layers you need visible (you can view multiple layers at once), you’ll only see those objects on those layers.

GroupPro was made because default blender group instances are powerful, but they are not user friendly to work with. With GroupPro I managed to get rid of all annoying features of group instances: you can edit any instances on scene, not just the...


It is not perfect - has some glitches here and there but overall it works really well and it is very usefull tool to organize the scene.
elgrayso (elgrayso) April 26, 2018, 4:29am #5

Anthony, Removing those lines would certainly be helpful! And what is the typical practice for parenting to an empty object, do you just hover that empty above the actual objects and use that as a “handle”?

maraCZ, That sounds pretty cool, I could be interested in that in the future. What kind of glitches though?

The most straight forward way is to parent all of the stars to an empty.

at this moment all the stars and the empty are selected, but the empty is the ‘active object’ becuase it was selected last

all of the stars are parented to the empty and appear beneath it in the outliner with the ability to collpase them. If you move/rotate the empty, all the stars move as well.

cool, thank you photox. And it sounds like that is the common practice for professional Blender users that allows them to consolidate objects and organize?

It depend on all kinds of things, whenever possible use a particle system for situations where you want many many objects scattered. If you need to position them absolutely you may be forced to do something like this, although often times you can use a particle/hair system for hundreds far away, and then maybe you have a few you place by hand for composition.

Keeping the outliner managable, naming things well, smart parenting are all things that keep a scene usable as it gets large.

There are also those add on you can check out,