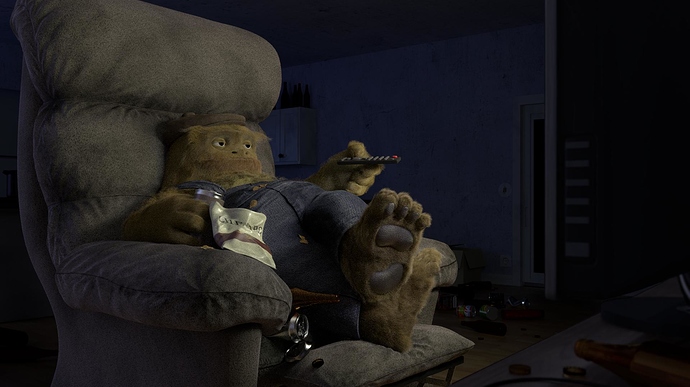 would like to get opinions especially about the composition, light and shading.

Some of the backgroud props (very shadowed) and beer can/bottles were taken from blendswap and cgcookie. I will update the post with the full links and credit of the props once I get all my assets organized.
All the rest (character, couch and foreground) was modeled by me. I used CMV for some of the shaders such as the couch, but was also modifying it, by adding dirt maps, and removing or changing nodes for faster render.

For the small chips pieces I used Translucency, but I understood that it is causing a lot of noise, and better to avoid it. does anyone have an idea for a good chips shader? there gonna be some more chips around in this scene.

after refining the light and composition I will start with the animation.
Here is a sample of an animation test of the characters

A bit about the pilot:
Gugi and Arnold is a serie that I wrote. Currently there are 5 written chapters/sketches, around 5 minutes each.
There is also a storyboard and an animatic for the pilot’s chapter, and I’m currently working on the first shots (inbetween my freelance jobs) that will help me to pitch the project.

First render draft for the animation

The video is only 50 samples and very low res.
I’m currently rendering a high res version but it’s taking forever (about 3 hours per frame)

would be nice to get some feedbacks, both on the animation and rendering.