I’m having some trouble with hair on a model with a multiresolution modifier. If the particle system is after the multires in the modifier stack, it doesn’t show up at all; if it’s before the multires, the roots are not attached to the skin.

Use Modifier Stack is enabled in particle system, before you ask.

Is this a known bug? I see references like this: https://developer.blender.org/T41040 which seems to be a slightly different problem, but indicates that particle systems don’t play well with the multires modifier sometimes.

As a workaround, is there any way to set the emission point as further down from the surface of the mesh? I know you can do that with using an object by dropping the mesh below the origin, but I can’t find an option to drop the strand relative the hair origin.

As a last resort, I guess I’ll just model the strands as a mesh - was kinda hoping I’d be able to avoid that, but if needs must… 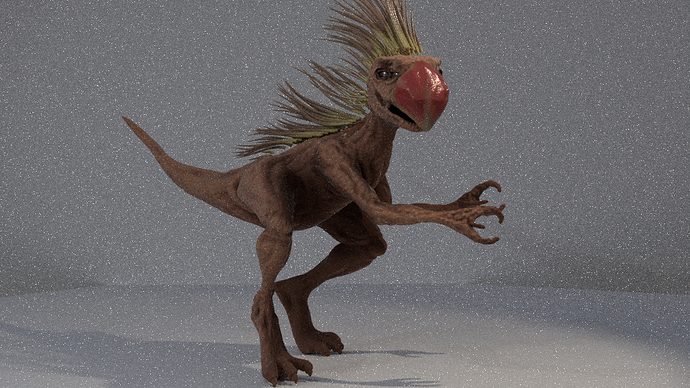 Using particles with subsurf/multires is rather tricky as the code is not really flexible for those cases (there are quite some design limitations here). If you intend to just render a still, you could use a separate mesh to emit the strands from. This could probably also work for an animation.

Put the hair system below (After) the multires.
Change your multi-res view, render and sculpt all to the highest level.
Unoikely but if you have another subsurf in the stack, set both view and render to the same value.
Go to the hair system.
free any bakes, and free edit.

It should now work correctly.

If you want to lower your multires in viewport it may look messed up in viewport, but will render correctly.

Photox - I tried that, and got the same disconnected result, with the bonus that styli8ng the hair on a 1.5 million vert mesh was a misery.

KWD’s suggestion is probably what I’ll go with - thanks!