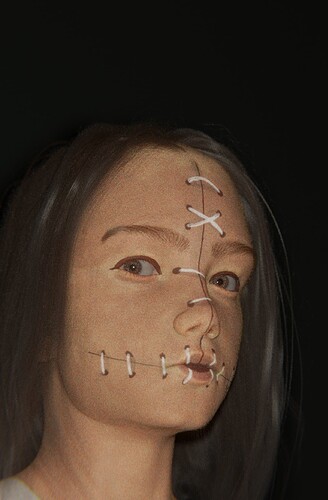 First of: I just realized that new members can only post one embed image for some reason, so i cant send a quick view at the viewport here, will maybe do that in a seperate post.

I created this one for a discord challenge from Cggeek’s discord server with the theme “Halloween”.
I sculpted the face with the multires modifier from a basemesh with good topo, then started texturing with displacement and albedo maps from texturingxyz. A few unsaved blender texture paint images later I had the base skin done and then did a paint job for the make up, which was actually quite fun (I only used the default brush for this). Then for the hair grooming, I created 5 particle groups, that you cant even properly see in the final render lol, but it was one main group with the base form of the head hair, then one with some extra strands and finally one for that crazy frizz. Also one for the eyelashes and one kinda unnecessary one for the peach fuzz or vellus hair whatever you call it. The hair was shaded with the greatly customizable CC_Hair Shader by Chris Chuipka (available on gumroad for free) . For the lighting i went for a dark outdoor hdri from polyhaven and some walls that blocked the light a bit, then for the “camera flash” effect, which kinda failed, but anyway, its just a simple area light thats relative small and has high strenght. I positioned that in the angle and position of the camera, so it looked correct (Thanks Blitter, for that simple but great tip) Then after I checked everything and adjusted some stuff again, I pressed render with a super low sample count of 45, which wasnt intended at first, but since i finally wanted to get it done, i didnt want to wait a few hours for my render to come out, so i turned the samples down. But surprisingly the first test render had kinda that exact “photo look” i was going for, so i let it at that and rendered again with a tiny bit of compositing(very tiny). Its far from perfect (especially the hair grooming and the skin texture) but overall that were a pretty fun roughly 3 weeks.I def learned a lot of new stuff, so I now have the feeling, that I could recreate it from scratch within a few days lol Hope you enjoyed it!

I added your work to the #halloween gallery