Hi all, the title pretty much sums it up. I am done with the Room which has 8 big glass tubes, with weird looking liquid in them.
So here is the render:

I couldn’t render in any higher resolution without blender crashing

Here is the WIP thread for anyone who is interested: http://blenderartists.org/forum/showthread.php?t=192147 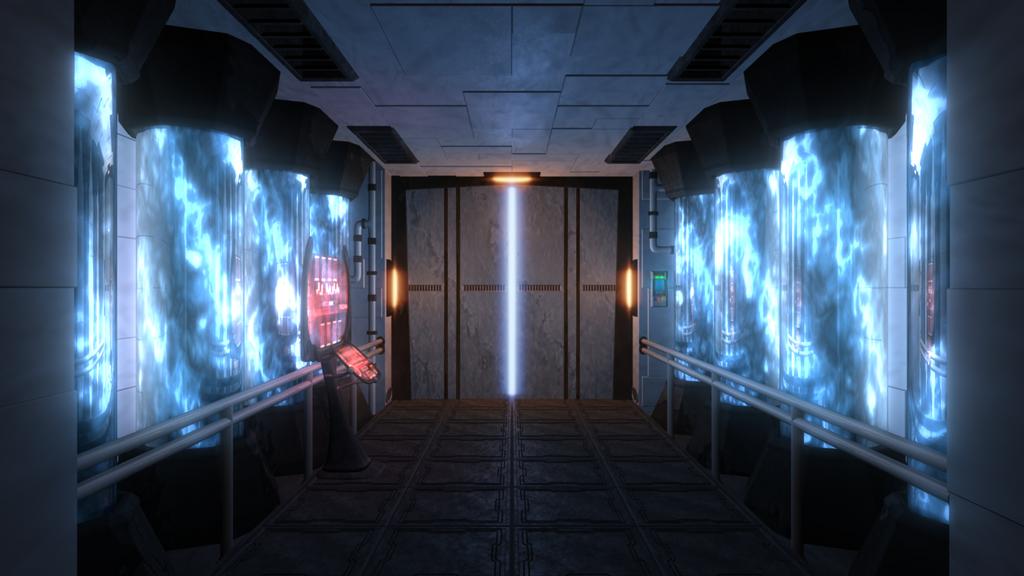 very nice
how do you achieve glow?

Nice start, but for such a dark room it seems to be missing shadows? Shouldn’t there be some shdows creeping in at the base of those tubes?

@Atom, Start? Really? Does it seem to you that this is not done/finished at all?

As for shadows, i am using 8 lamps(next to each of the 8 tubes) to simulate the light coming from the tubes, so i guess i can decrease the energy for them? But i mean the liquid is supposed to emit light so…

Wow, no comments?(well, 2 but still…) i thought i did a pretty good job with this scene

woah, that is awesome, DDD!

Really fantastic viewing, the way you’ve used the colours is easy on the eyes. Could be an energy plant of the future, silent power!

Ugh. Darn you and those pathetic little sad faces. I just had to respond. Well anyways, you said you thought you did a pretty good job with this scene. You did. It’s very cool. But what I think Atom means regarding the shadows is that there should be some ambient occlusion. Try setting the ambient occlusion to a factor of 1.00, and change the blend mode to Multiply. Good job though!

Yay! 3 more!
@MeshWeaver thanks! Haha, yeah those display panels are sure better what i had originally there (check the wip thread) I thought they came out rather nice.
@matabele thanks you! i am glad the colors flow nicely, i was actually going for the cool to warm effect thing so yeah i got the cool blue coming from the tubes and the warm orange and red from the lights and panels. So I am glad to hear that you think it worked out. And yeah it definately could be an energy plant, whatever your imagination tells you!
@pixarmaniac5289, “Ugh. Darn you and those pathetic little sad faces.”

“I just had to respond.” thank you for doing so, i appreciate it. So thanks for the compliments! As for AO, i dont exactly remember it I did enable it…I’ll look into it, but it renders kinda slowly cuz of all the raytracing and compositing. and with AO enabled…but yeah if i get a chance ill re render it.

Again ty for the comments, they are always appreciated, even if they are 2 words long or something.

i’ve looked at this for a while…

the firs thing i would change is the tiles on the ceiling, their varied elevation seems arbitrary, even if they are removable for maintenance. i would expect them to have markings/barcode/holes for keys, grips. And i’d use a bevel, however small, on the edges of those ceiling panels to increase realism. This applies to all flat/sharp surfaces that took no longer than 20 seconds to model. Edgeloops and smoothing+subsurf even for details like this.

perhaps this is subjective, but maybe that detail is a little too decorative.

the keypad beside the door suggests with the green light, that it’s about to open, but there’s noone standing inside waiting to leave, so did someone open the door from the other side? it leaves me as a viewer thinking that this is a still from a longer scene, a still taken before something was about to get interesting.

I really like the atmosphere! It looks like a screenshot from a modern fps!
Tip: If you add some shadows it will show more realistic.

The reason i put the tiles in was because it looked too plain compared with the rest of the scene…i never seen holes for keys or barcodes on ceiling wtf so eeerrr wat lol? Maybe markings buuuut. eeh What about if i made them uniform?, but then the floor is uniform…might not look good either.

As for bevel i do have it! Check the post in the focused critique for comparison.

As for the door, i guess your right but eh, lol, anything can happen? i might change it laterz.

About the green light on the keypad point…
This was actually discussed in the WIP threa, so ill give a summary here: I wanted to to both with and without a person scene, however i dont have a person model…
So, for this scene it could be interpreted as either someone alredy walked in and the dooe is about to close, OR someone is just opening the door from the inside, which imo adds a sense of anxiety, basically what you said, " it leaves me as a viewer thinking that this is a still from a longer scene, a still taken before something was about to get interesting." so imo it is a good thing because the image is basically teasing the viewer. Maybe that is not the case but that is my opinion about it.
Back to the person…i was thinking of having a guy in a lab coat in front of the door, when i deside to model him.

As for the script, i actually tried it, but it doesnt go too well with my scene because of the effects i am using in the compositor, more specifically the blur nodes. they blur all around to make a sort of halo so if the render is split into two you see 2 halos and id doesnt look to well (I already tried it actually

As a final note, i thank you for taking a deeper look into my render, it is always appreciated!

This is really cool. Looks like a game environment, reminds me of Mass Effect.
I watched the animation test on Vimeo too. Really nice

What I like the most is the what-do-you-call-it computer thing. Console? Anyway, how did you achieve the hologram effect? It’s really cool, and I would like to make something similar.

(just realized this thread hasn’t been active for some time. great work anyway^^)

wow this is amazing!

and thank you for commenting the link to your tut, I’ve gotta learn how to do this!

Great Job in th scene setup. But in a more deep look, the Control Panel in the left seem to be inside the liquid, it could have been moved front.

Does anyone else find it similar to the Hallway before the Queen’s chamber in Resident Evil?

Oh cool this thread has been revived a couple of times.
Thanks for the compliments, i really like how this looks like a game environment to you guys.

Yanneyanen, yes a console, the hologram was created by first making making an image in gimp (there is a filter to make the horizontal lines that give ti the hologram feel) then i used the image as a texture in a plane that was half transparent.
Also i believe i added a slight glow from the compositor…

dinesharun, no it is definitely outside on the ground

it is probably b/c of the transparency that it seems to be that way for you.
You know what? It kinda does look like the hallway before the Queen’s chamber, but completely different.

I only used my imagination for this, no references.