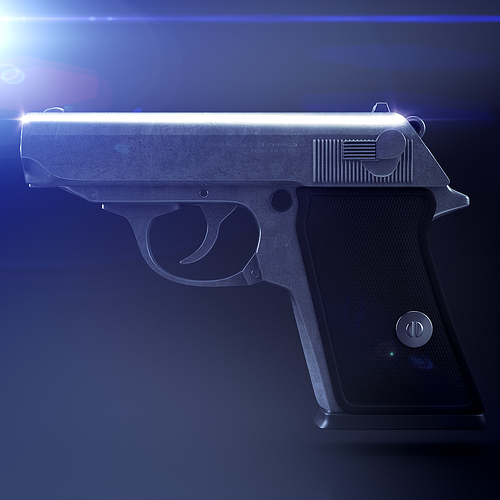 the screw on the grips would make this gun very uncomfortable to fire and even difficult to control in a rapid successive situation. In needs to be flush or slightly countersunk into the grip. Also the light flare on both ends unrealistic from the light source. source is behind but flare on the front. Other than that not bad

Looks good. The screw looks too big. The gun itself would look better if it was black I think, but I might be wrong. The bottom of the gun looks fake. I don’t really like the lighting. The bright light in the top left takes the attention off the gun, and the flares don’t fit the image I think. The gun casts a shadow, so it is floating, but I think that without the shadow it would look better. Lastly, it seems to be lacking some detail in the top part. It looks kind of blank. But overall really nice work

The background looks bland and the lens flare at the top left corner looks squished and unnatural. However the material of the gun metal is very nice.

I’ll echo the other posters comments on the screw in the grips. Shrinking the size of the screw and countersinking it into the grips themselves would address that issue. There are a few other things that I would suggest:

For me (Im not a gun-person) I think the place where you hold your hand on is too wide for the rest of the gun, and also the screw on the handle (Lets call it that) should be painted so it fits with the rest of the gun (according to me)