After following as much as I could of a tutorial for the hand, I got stuck and decided to wing it. Right now I’m about ready to attach the thumb, but before I do, I’d like your opinion on the mesh flow. The highlighted polys are where I plan on attaching the thumb to. Are there any changes that I should make? 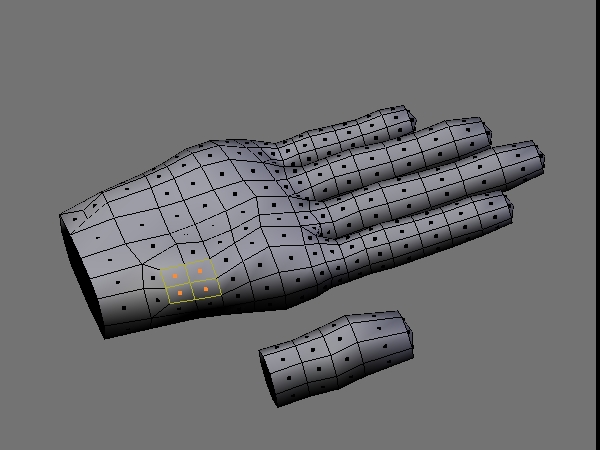 Thumb attaches more underneath. It’s on a diagonal.

Edit: unless that’s the right hand you’re doing, palm up. If so, index finger looking a tad small.

Yeah, that is the right hand. It’s shown upside down to show a better view of the palm.

yeah the hand can be tricky can’t it - my personal preference is to sculpt a highpoly model and then retopo a low poly from the high poly. Then if you want you can bake the normal map when your done

you see this way, as you’re sculpting you can focus on anatomy and the object itself, THEN when you’re doing retopo, you only have to think abotu topology because the shape of the model has already been determined mostly. But if you start with the lowpoly you generally have to think about both at once or you’ll probably find yoruself going back and forth between lowpoly and high, making edits -

too bad the GSOC multires modifier isn’t implemented yet, or either approach would be about equally effecient as you could actually build the low and high poly at the same time and edit them at the same time