WOW, has anyone seen this already? :eek:

it has those modo mesh fusion tools plus more.

ps: i hope no one posted this already but i used the search function ^^

Damn this would be really nice to have. If only they would make a plugin for Blender as well. But I don’t think they can make money of it cause of licensing? Or the source code would be revealed? Not too sure.

Either way this would be nice to implement into Blender.

That looks really nice. I’m not sure how python performs in Maya however but I would think it is kinda slow on heavy meshes.

Maya has a C++ plugin API as well

I think this would be great as well.I suggested that the Boolean modifier should have some of this.I guess they beat blender to it.

Booleans that produce a nice mesh that care’s about shading - always welcome.

very boring and annoying this constant “blender is not good we need new features and we will make professional things then” thing.

but: check Groboto, its a very good boolean modeling app

Blender 3D will be on par with this type of application after the Automated Remesh Modifier (GSOC2014) will be done … Even mesh-es that have some errors on boolean will be fixed.

So guys stop the rant!

cool, i welcome all things that make life easier.

Blender 3D will be on par with this type of application after the Automated Remesh Modifier (GSOC2014) will be done … Even mesh-es that have some errors on boolean will be fixed.

So guys stop the rant!

Remeshing has nothing to do with a proper mesh boolean system with adjustable fillets and bevels. No one could possibly call that “on par”.

I asked the guy making this, I don’t know if this is going to be a commercial thing or not. Doesn’t seem like it. I suggested that he look into blender after Maya gets sorted out and he said he would be interested.

But maybe after the resmesh modifier happens this sort of thing will pop up quickly from someone else.

Mesh Fusion isn’t all quads either

Mesh Fusion isn’t all quads either

I see it now, you’re right

I have a similar feature request for Dynamic Sculpt.
“Profile Brush”
I think the picture is self explanatory 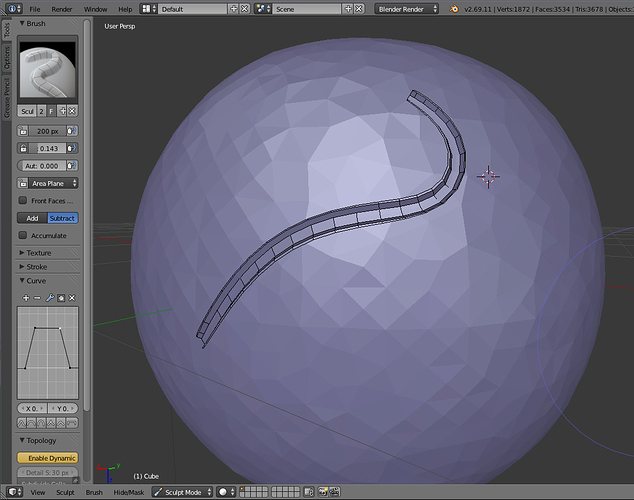 If we can make polys like that in sculpt, it will maybe possible to retopo like that.

The idea is add or subtract locally ordered meshes, following a path.
Maybe could work as a retopology tool, but wasn’t primary intention

I like that screenshot a lot. Hopefully it happens one day.