Made this for the weekend challenge #256.
(Note, latest version below, previous versions attached) 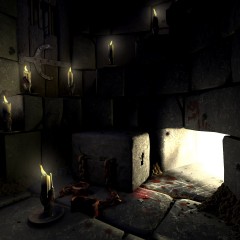 I spent a lot of time on the lighting, but it’s not quite right yet and I don’t know which direction to go. I’m not really happy with the stone texture either. Critiques on other areas are welcome too.
Marsan suggested nixing the candles and lighting with moonlight from the window. I like how the candles emphasize the staircase, but they give the scene a comfortable warmth which I’m not sure works that great. It makes the dungeon feel almost cozy instead of oppressive. 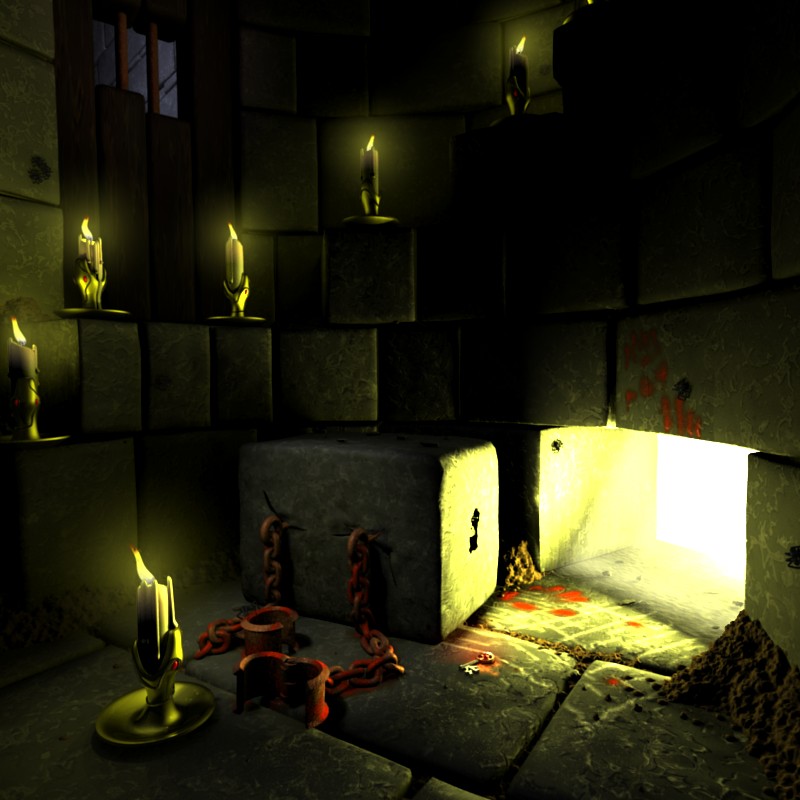 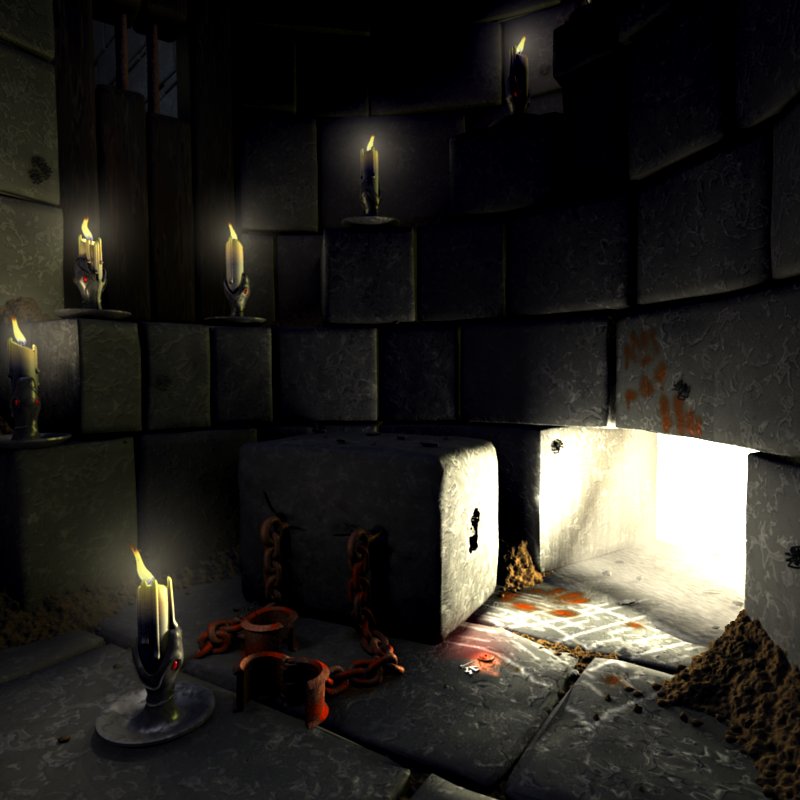 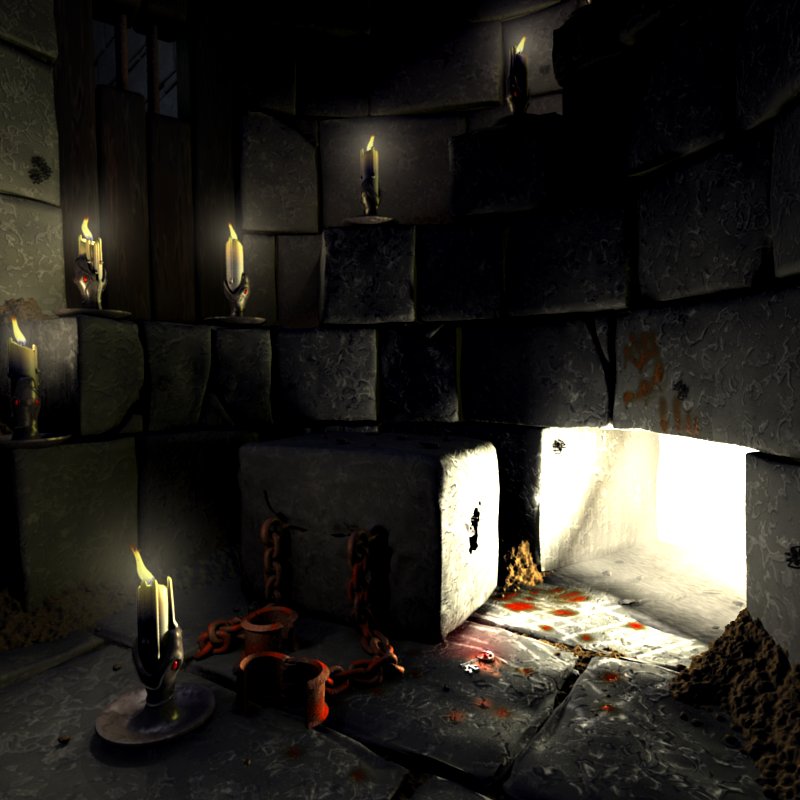 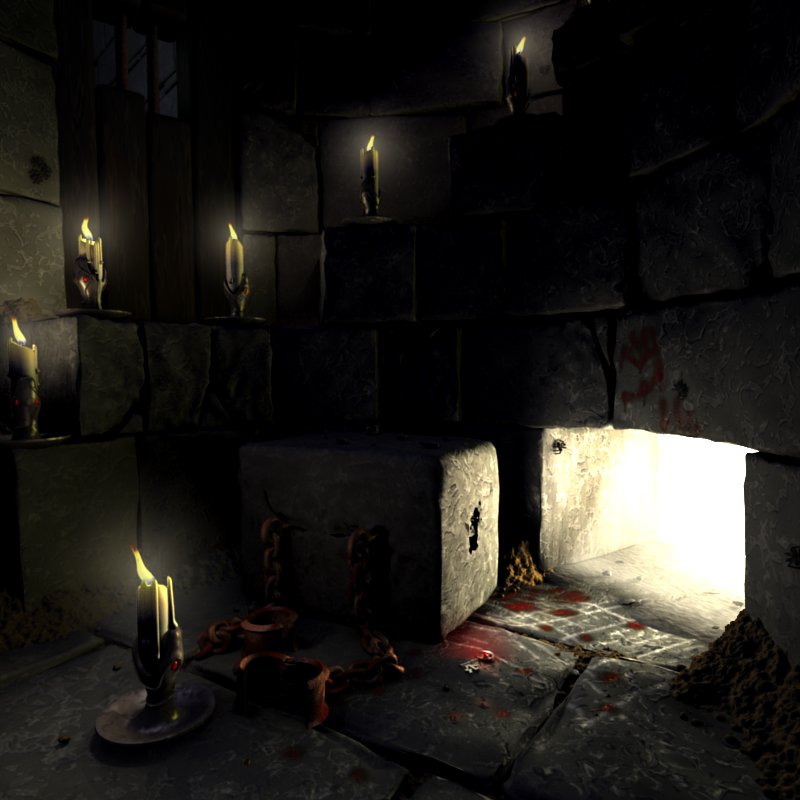 i wouldnt change anything it looks finished to me

your candlelight is a little bit too green. The modeling looks great. You might want to stick some blue light for the shaded areas just to add a little contrast to the bright yellow outside, and the hopefully soon more orangish candlelight.

Implemented the suggestions, more orange in the candles, more blue in the shadows. The second image has some bloom too.
Other than lighting, I also filled in the bloody handprints on the floor and wall to make them more recognizable. Improvement I think! I like the new lighting better.

Somehow this piece doesn’t seem to have the emotional depth I was expecting. Perhaps its just the compostion…

Try to play a little with the light. Give the dungeon some blue light to make it more cold and add some subtle redtones to the outside to make it seem more warm. This might give some more emotional depth to the scene.
Also I think the candles give a warm and cozy feeling (at least in my opinion) so if you have the time remove them and go with some indirect light from an obscured not shown source.

I wouldn’t go so far as to remove the candles. maybe try and make them seem sadder somehow. and i think personally the blood of the hands should be darker red. right now to me they look like spray paint. or hand prints from when you were a kid. All in all though looks pretty good. Keep working at it though. Don’t give up on it.

I agree with musk about the candles. And the candlesticks are much too fancy for a dungeon.

Lighting that strong coming in the hole from the outside should give rock colored bounce light all over the inside of the cell. Try a spot under the floor pointing up from the pool of light to cast shadows, and some hemis to throw around some general bluish illumination. Not too much, though. Less light as you get higher in the cell. There seems to be a window or a doorway in the upper left, which could serve as a source of indirect illumination too.

I think the handprint looks cartoony. It looked more realistic as smears and blotches. The stone texture and the dirt looks really good.

I think the bricks look a bit too uniform and flat.
Maybe increase the Bump map depth a bit.
The image does overall still look a bit too friendly, or warm as you said yourself.
To get rid of that I would simply desaturate it a bit in post.

As an example I have attached your last image (with bloom) with slightly reduced saturation to this post, just to give an idea of how it could change the appearance (I hope you don’t mind).

I also have to agree with Orinco on the handprints, just use a bit of the smear tool on their textures, and I guess it should be ok. 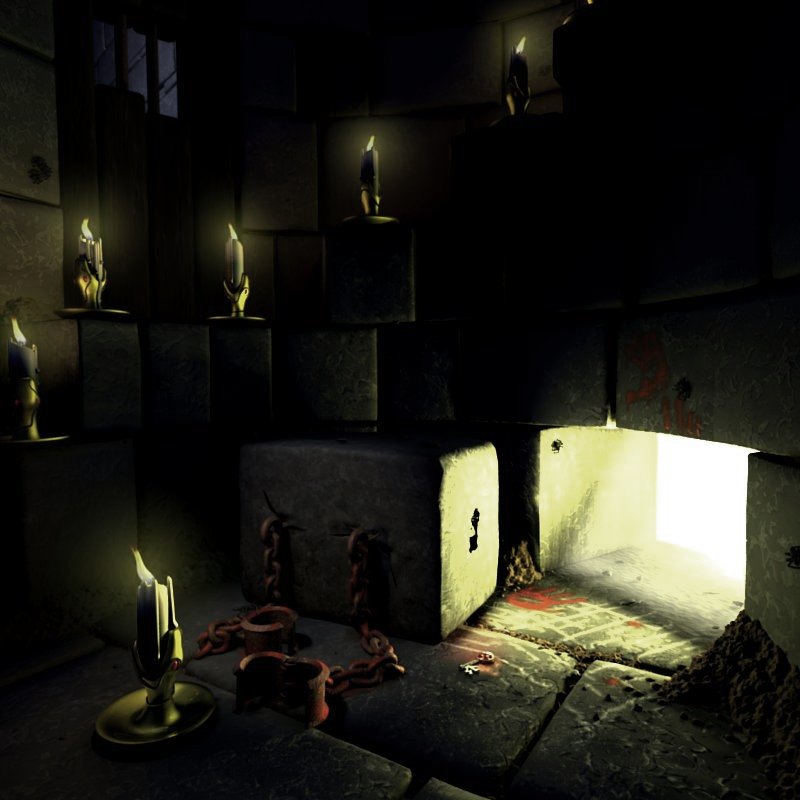 i would think about adding a more items you would see in a tower/cellar like this. maybe have a spider web with a moth in it and a spider coming to kill it; add a mouse taking cheese/food off an improvised mouse trap; have a dirty plate with crumbs on it; a spoon/fork that has been ground down; scratches on the wall marking how long the visitor stayed; someone peeking inside from the window in the door with a surprised look.

All your colours look too hypersaturated, which makes them look kind of cartoony. This is not anything I think is bad, in general, but if you want a grimmer mood, desaturated, cooler colours tend to work better. Like your sunlight colour, for example, seems to be banana yellow, which is like no sunlight I’ve ever seen. Try for light, gauzy gold ranging to white-yellow, and so forth.

Thanks for all the solid suggestions guys!
Rinne, no I don’t mind in the slightest, that was quite helpful.
Added a bluish hemi light pointing down and a couple of spots pointing up. Reduced the saturation of most of the colors. Reverted the handprint textures to the preivous more blotchy version and darkened the color. Took out the bloom. Changed the candle stick texture to something a bit less “made of solid gold” looking.

I think the candle stick texture needs more work. Is the color too washed out now? Should the bloom come back? I feel like there should be something right in the middle of the picture, in that dark spot, it feels empty. Maybe that’s good?

The Bloom doesn’t seem to make that much of a difference, as far as I noticed…

I can’t really comment on most of the changes you made, because the lighting situation has dramatically changed.

It looks a bit more real now, due to the heavy ambient light, but I think you lost a lot of the mood. I don’t know what the others will say, but I think you should bring back those heavy shadows that did a lot to help the dramatic appearance (atmosphere over realism). It does also result in heavy loss of contrast.

I’d say head for a compromise: don’t remove the hemi, but reduce it’s power to a minimum.

Rinne: Thanks for the suggestion. I toned back the hemi light just a bit, increased the candle intensity and range a smidge and slightly increased the AO. It’s amazing how big a difference such small changes can make.
I cleaned up the old versions, the newest version is linked from the first post. Here it is again, if you don’t want to scroll all the way back up.

Yay, it looks much better now

But this isn’t necessarily a drawback. Some fine improvements there…
The uniform bricks still lower the comfort to look at the picture a bit, maybe just add a few smaller or bigger holes or other damages to them…

I don’t want to screw your concept there, though

I feel like the blood is too bright… needs to be darker.

Okay, increased the bump on the stone, added some displacement, and threw in a few flaws. Good suggestion! Also darkened the blood a bit, though it can be darker…

I think you should decrease the light intensity a bit more, so the bump on the stone is more visible than only in the edges. Try adding AO on Both, maybe it would improve it, or maybe it wouldn’t. I think it would help the scene, especially the dirt pile on the right of the hole. The bloody handprints above the hole look orange to me. It should be a much darker red tone. I think that goes for the cuffs as well, even though you already made the blood darker.
But i like the scene idea a lot!

to me it appears as if the blood got brighter oO

The blood looks rather … not human. Try making it dark reddish, or rust-reddish-brown. Atmosphere looks alright.

Yeah, that blood needed some fixing. Way too orange. While I was at it I darkened the bright light a bit and increased the sub-surf on the stone walls and floor. Thanks for all the feedback guys! After staring at something for a few days it becomes hard to see it without bias.