Hi there
I have started to work again on this model of a Harley Davidson I had made long ago using 2.49,now trying to render this babe in Cycles
any feedback would be more than welcome
thanks
Peter 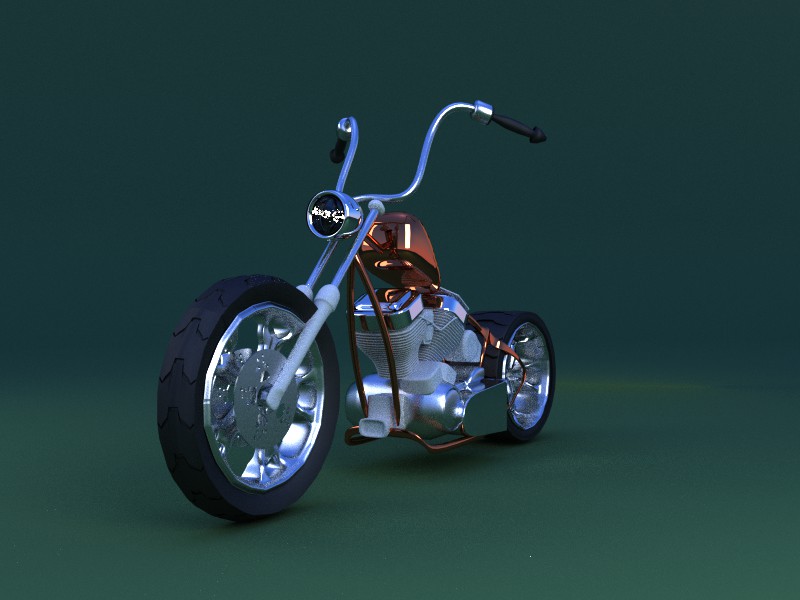 Neat, The only thing that bugs me is that the middle of the engine is matte.(not quite sure if intentional)

thank you nub 43,you are so right I think,actually,this is a separate part,visible on my reference image,I’m currently trying to id…obviously (and to my knowledge) down there resides the crankshaft chamber that sends the power to the transmission and is connected to the clutch system,so I guess,it could be an additional ram air or something just placed down there but connected,somehow,to the the upper (air intake valves) part of the motor…again…still searching on that so yeah ,this is probably going to change,hopefully soon…once more ,I thank you for your nice comment feedback and support,Peter

Nice to see a bike, they don’t come up very often (except for scooters). Personally I’d like to see a lot more detail in the model, plus the shaders/materials seem a bit off. Maybe make the chrome more mirror like (Glossy roughness at 0.0001) and the tank material a mix of say 100 diffuse with Glossy roughness set to 0 - or maybe just a smidge of softness like the Chrome.

Don’t forget to use Subsurf to add extra smoothness, especially on the wheels - I’d use it for the majority of parts saying that.

With the tyres it’s probably hard to find treds to model with, I’d try and source some, or if you’ve a bike at home, why not take a print from the tyre? You could fallow any of the car wheel tutorials on doing tread once you have that sorted. Although saying that since Cycles I think it’s a lot easier to get a good bump/displacement which would save a lot on poly count and probably look pretty good unless you wanted an extreme close-up.

If you’re stuck on the studio setup, or materials - you could always head on over to blendswap.com and download a few cars and use some of those to help too.

Anyhu, keep at it and good luck

wow…thank you Jay-artist for your extended,thorough and well aimed comment! with the materials and the tires,yes,I’ll come to agree with you.they really need some further work and polishing,this is a rather rudimentary material nodes setup for most of them,I mean,the tank could have a second-of “high roughness”- glossy shader mixed with the primary one,plus a noise texture added for controlling the “grainess” and,thus,giving a “metallic paint” look…as for the rims now,they do have a Subsurf and an Edge Split modifiers added but what they need for looking right,I think,is some “from sharp edges”-controlled creases (not just “from angle”-controlled ones) and ,perhaps,a couple of edgeloops here and there…with the tires now,I didn’t really work seriously on them,just used a basic pattern along with an Array and a Curve modifiers,but I really think your suggestion for using the Displacement channel instead is worth the try,in Cycles,you can get some good bump maps that could do for most cases with the exception of some extreme close-ups perhaps…again,this is the result of a couple of days of modeling and a couple of hours of assigning materials and rendering so far
that being said ,I"ll take into account all your nice ideas and suggestions,thank you so much for the feedback and the focused,constructive critique,
Peter

I was involved in a competition a while ago and I remembered someone doing a motorocycle.
I have found the thread. It’s not done in blender but the author does give wireframes so you can get an idea of how he did it.
He also had regular uploads that show the process he went through. You can find the thread at: http://eat3d.com/forum/contests-and-challenges/high-poly-vehicle-stascrash-final