First of all i have to say Hello everyone cause this is my first post here. I waited to get a prety nice work made mostly in Blender and post it .

So i will paste the details i posted on CGSociety .

Finaly i get to an end with this work ( hope at least ) .
When i started i had no idea what i want to do , i just knew that i want to combine 2D with 3D . And here it is . The front is 3D except girl’s hair , modeled in blender , textured in gimp .
About girl’s hair i chosed to paint it cause i was not able to get some good results using blender hair.
The background is some kind of matte painting.
The compositing made with photoshop.

Any crits and pieces of advice are most welcomed .
Thank you for viewing. 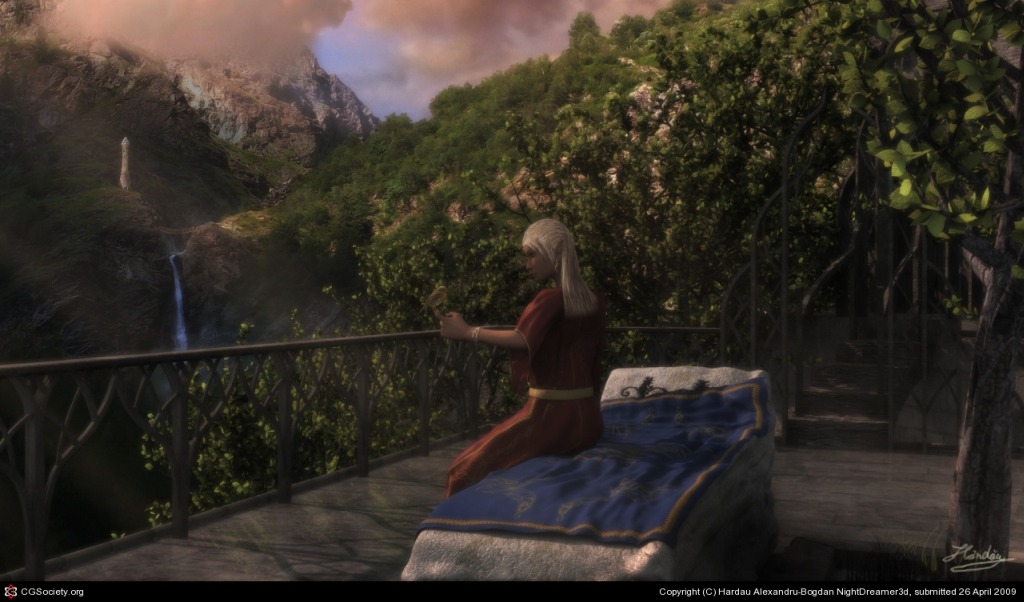 Looks pretty cool. Except for that bed. To me it looks like it’s made of rock, which doesn’t seem like it’d be very comfortable to sleep or rest on. Everything else looks good to me though

Very nice! My only crit is that the photorealism and clarity of the mountains in the background contrast heavily with the non-photorealism of the character, ultimately drawing my eye up to the corner of the picture. Blur/haze some of that background or ramp up the photoreal on the character and immediate surroundings and the composition should balance itself back out.

Nice scene, but it needs more contrast and light ;), were the clouds done in post pro?

To me it looks like it’s made of rock

Well, I think it IS rock

Nothing like sleeping on a rocky bed to find harmony with nature!

I agree with bluetygr about the composition PLUS, I’d say that the waterfall is too saturated since the sky seems covered with pink clouds. But that’s all!

Some lightbeams would have help focus on the main character and the bird, which I didn’t even see at first glance, lack of contrast with background.

Wow im very happy to see i got some very nice crits back .So i will answer to each of you.

To bluetygr:
Yes u are right about the contrast of photoralism , i will try to rework the compositing and blur the black ground, so in a few days i hope i will have the time to rework this.

To otto riis:
The compositing was done in photshop + gimp and also a bit of blenders node editor.

To Djordhan:
Yes i will try to create some light beams too.

Thank you all once again for your kind words.

the background is great. the 3D stuff may not be hyperrealistic, but is very good and fits.

but i think you could really improve this picture a LOT if you change the posing of the character. that’s something really essentail and right now it’s a little “flat”. it’s hard to explain it in words, but take a look at the silhouette and give her pose some “energy”. look at poses from michelanglo for example! (david, creation of adam,…). if you have a copy of disney’s snow white you could study the bird scene there.