Hey all, I finally got Blender going on my new Linux box, and thought I would share my findings. I am using OpenSuse 11.3 which uses the Noveau driver. This driver does not work with Blender and my video card, an Nvidia 9500 GT by evga. I am using it to drive two 19" displays at up to 1600x1200 each but more reasonably 1280x1024 When I ran Blender, it gave a grey screen, and maybe the splash, but that was it, and the app became unresponsive. I am using KDE, but it should be the same issue if you are using Gnome, since the issue is with the underlying X windows interface. Using the KDE Configure Desktop-Display applet I could select the second monitor to be right of the first one, but curiously I had to restart the applet to get the multiple monitors to work, and it would not remember that I wanted twin view, and would default back to clone on re-boot. I knew from prior experience that I needed to install the native nvidia proprietary driver.

My first attempt led me to download the nvidia driver from nvidia and follow their instructions about init 3 and such. Don’t do it. Instead, I found some instructions to use YaST and add the Nvidia site to the repository list, and then download the nvidia driver that way. I downloaded the driver, and then two utilities, nvdock and nvidia-settings. YaST took care of the dependencies and everything downloaded and installed automagically. However, the system info still showed the Nouveau driver running. Cold Reboot resulted in one main display on one monitor, but now the KDE applet only showed one monitor hooked up and I could not use it to configure/see the other monitor. I suspected that the nvidia driver was not revealing the other monitor to the x server.

I ran the nvdock applet, and there it saw both monitors, and I selected twin view from the X Server Display Configuration. Then I saw a button to save X configuration file. After some digging, I found it is supposed to be saved as /etc/x11/xorg.conf Then another cold reboot - voila! The Nouveau driver is gone, and my desktop is spread across both monitors. The KDE applet thinks I have one desktop/monitor that is 2560x1024. Blender runs splendidly.

I hope this helps anyone installing a new Linux system and getting the Nouveau driver out and the Nvidia driver in. 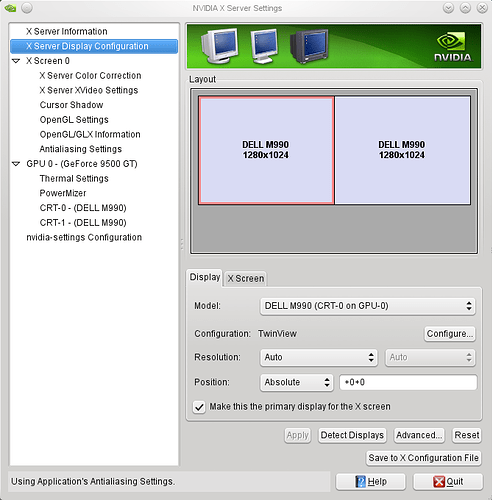