I suggest you find a concept that stuck in my mind for a few months now. I present “Valley Head.” It is simply a virtual world including spaces formed by small cubes and sprinkled with giant busts of real people. This world is expanding and you have the opportunity to play a role. 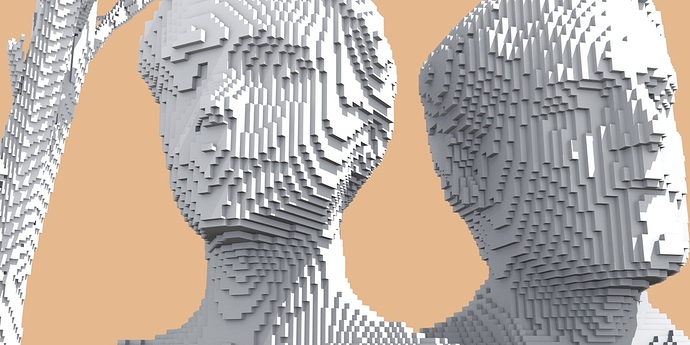 The concept.
By visiting this space, you will find that floating in nothingness, surrounded by a large fog that in places you squeeze him to stand in front of very large sculptures of heads, hence the name of the game in stems directly. This is nothing short of real people busts that have existed or exist today. People who are part of this universe and in part will in the future have been scanned and transformed into 3D models made up of a large number of cubes. The important thing is to know that you too can be part of this world. For this, one condition, you must scan yourself using Autodesk 123d Catch system for example, and send me the file for me to turn it into cubes and integrate it in the game. I wish the model is accompanied by an audio message you want to address the world or at least the players who will discover this virtual space in the future. The message will be triggered when the player will be held close to your bust. Only quality scans will be integrated in Valley Head

In terms of features, your character can create and projecting blue cubes forward, giving him the opportunity to make bridges or other irregular patterns in the world. In this way it is possible to climb 3d sculptures of the game and, later, to join other detached areas of the main island. I hope you’ll enjoy this game

New version of “Head Valley 1.5” posted on gregdesign.ch with a lot of improvement and optimization !