Heart of the Jungle

Hey! whats up guys! just wanted to show off a scene I did of this jungle river.
This image uses a lot of particles (obviously). All the weeds and grass are particles. So are the hanging vines and the moss on the rocks.
I also used a plane with a wave modifier and some dynamic pant to make the ripples in the water more believable. 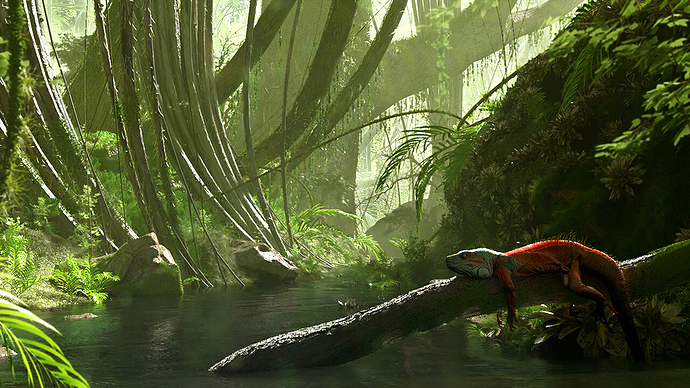 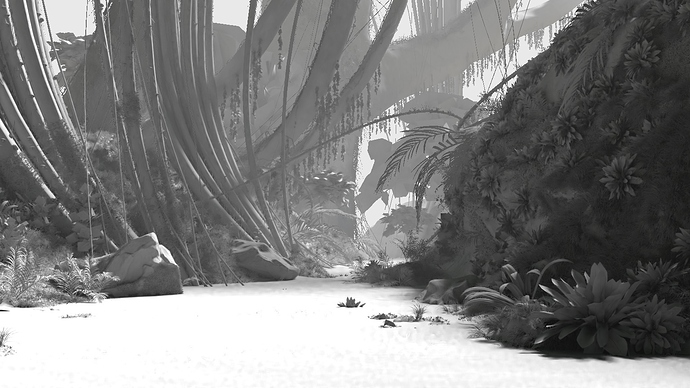 Anyways, tell me what you think! I am rendering a clay now.

The shading and modeling look well done, but I notice that it’s a pretty bright image (especially for what is supposed to be in an area where the vegetation is dense).

I would darken the lighting and color the mist a little to make it seem murkier and denser.

Gorgeous scene ! love the lighting and the mood of the image. Perhaps it lacks a point of interest, although it is so full of details.

It’s funny because I also did a nature scene a few hours ago, and I’ve not been able to get a satisfactory water, whereas yours seems so realistic. Unfortunately, I have never fully understood dynamic paint

@Ace_Dragon Thanks! I thought about going for the planet Dagobah version of the jungle but in the end, went with a cleaner look. I was thinking that the jungle is both chaotic and yet still perfectly clean

@TomZed It does kind of lack a point of interest. I tried a raft and even a fairy

but neither of those worked too well. Any ideas?
Dynamic paint is extremely powerful and I really love it! Maybe I can do a video on it some time. I do wish that dynamic paint was a little more fleshed out though.

Nice work. That darker look in the jungle is not due to a lower level of illumination but to the amount of vegetation that occludes light. I wouldn’t change the illumination intensity but instead add more well placed “shapes” to block the light.
About the point of interest, it depends on what “story” you thought to tell, could be a man made object or a feature of the vegetation.
My two cents!

Sorry, it took me so long to add the Clay render. I also added a focal element which I think works.
The Iguana was quite simple to make. Basically, I just modeled it off an image then I unraped it and shaded it.
Anyway, hope you like the update!
Thanks!

So… I’m coming over to your house so that you can teach me how to use blender. K? This is fantastic!

LOL! thank you @boblybill I do have a youtube although that is never as good as a live teacher

Hi. I like the iguana as a point of interest. Well done!

Thanks man! It did give the scene more life. Plus another color which is nice.

the lighting looks burnt. Are you using filmic?

No, I am not using filmic. The final color grading was done in Photoshop. I probably should have used filmic. I guess I just didn’t think of it.
Thanks!

Yes, if you don’t set it up by default you may forget to use it. The great advantage of Filmic is its wide dinamic range which provides great flexibility in the post-processing stage, without losing important data. Give it a try and re-render the scene, you will notice the difference in Compositing (obviously if you save the render before compositing remember to use the EXR 32bit format).

Very nice work. I would be proud of it, as is.

From an artistic-message point of view, though, I think a prolific scene such as you’ve created invites a narrative told through some non-obvious component that takes the viewer just a moment to catch and to appreciate. Done right, it has the effect of making the art work a lot more compelling. I do not for a moment assume that you need me to tell you that. Just having fun here, at your invitation.

“Heart of the Jungle…” Jungles are all about life, are they not? And “life” is a very precarious and sometimes violent state of things. Without beginning or end, the reptile gives us a great place to jump into the middle of the jungle story. While it can be plenty to observe a reptile like this one just relaxing on the tree branch gazing nowhere in particular into the lush scene, I feel tempted to include, say, two other active components. I see the same reptile with its gaze fixed on an obvious predatory target - say, an insect or some such. Lurking beneath the water or in the plants or shadows, however, close inspection reveals another actor scoping-out our reptile with similar prospects. It could be almost anything. A bird of prey. A giant insect. The peering eye and nostrils of a much larger reptile. A pair of talons or claws entering the scene. Some fanciful, carnivorous plant. Just small visible portion of an immense, tracked vehicle in the distance, approaching under the command of the most destructive of all predators to wreak havoc upon the jungle heart itself. Twists like these, artfully and subtlety introduced, promote a beautiful static image like the current scene to something more than can be achieved by skill alone: a story, a message.

@DeadCenterSoul Thanks for the critique!
This image started out as more of a test to see how fast I could come up with a really dense nature scene. In the end, I was happy with what the result. Maybe it isn’t perfect and maybe I will work on it a little more but if not I think it will be alright the way it is.

Yes, you’ve achieved your goal, either way. It’s a very nice, thought-provoking scene. Your reply begs the question: How much time have you given to its creation?

The jungle it’sellf took about four hours. Rendering took two or three hours. and the chemillion took about an hour as well. Wasn’t super fast but having a clear idea of the scene beforhand made it go alot faster!

Whats with the reptile though, did he slip??