Whenever I try to create mountains with my height maps I just get really really bumpy surfaces, is there something more that I should do besides jacking up the normal slider all the way and hitting the normal button?

I would use the displace modifier. That always works for me. It allows you to see the displacement in real time on your 3D view and gives you more control over it.

If you need more specific instructions, I can make a step by step guide for you.

[Edit: By the way, if you’re only using the Nor button and the Normal slider, that won’t actually physically change the surface’s shape. It creates the illusion of depth by adding fake shadows and highlights on a flat surface.]

I think I would need some help, I looked at it and have no clue what to do

Working with the “normals” does not really give you mountains. it give´s you a flat plane and renders “fake mountains” on them. Just check out wikipedia on normal mapping then you understand it most likely.
As for your problem simply add your heightmap as normal texture.
Be sure your plane is subdivided several times… the more the accurate the result.
then check in the “map to” panel the “Disp” button and move up the Disp. slider as you like.

Displacement changes the offset of the vertices according to the color value of the texture.

I think I would need some help, I looked at it and have no clue what to do

Alright, well first of all, is your height map in black and white? I’m going to assume it is, but if it’s not, that’ll create some complications. Also… I’m no Blender expert, this is just how I know to do it. If anyone else has some additions / corrections, feel free to chime in.

First you add your heightmap as a regular texture. You can name it something easy to remember, I’ll name mine “heightmap”: 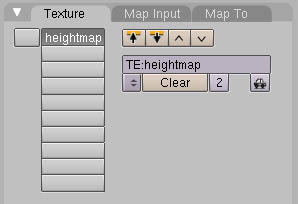 Before we go to the next step, you need to make sure your plane is subdivided enough. If it’s not, select all the vertices on your plane and push W, then select “Subdivide”. I would do that 5 or 6 times, and then do any further subdivisions through a Subsurf modifier (which we’ll do later). 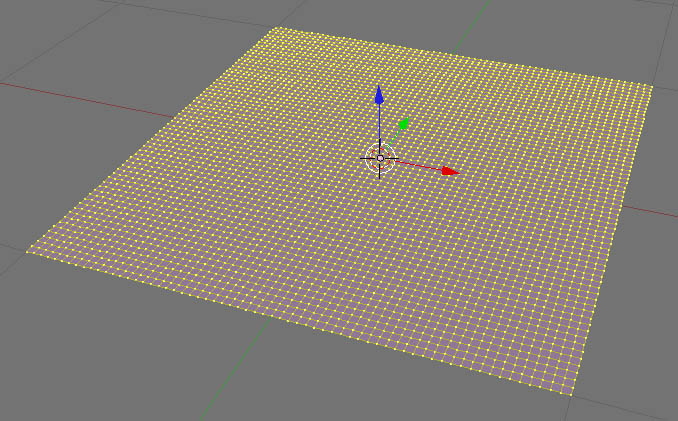 Now make sure your plane is selected (in Object mode) and go to the Editing Panel (F9) to find the Modifiers tab. Push “Add Modifier” and select “Displace”. Now for the magical moment… put your texture’s name in the field named “Texture:”. 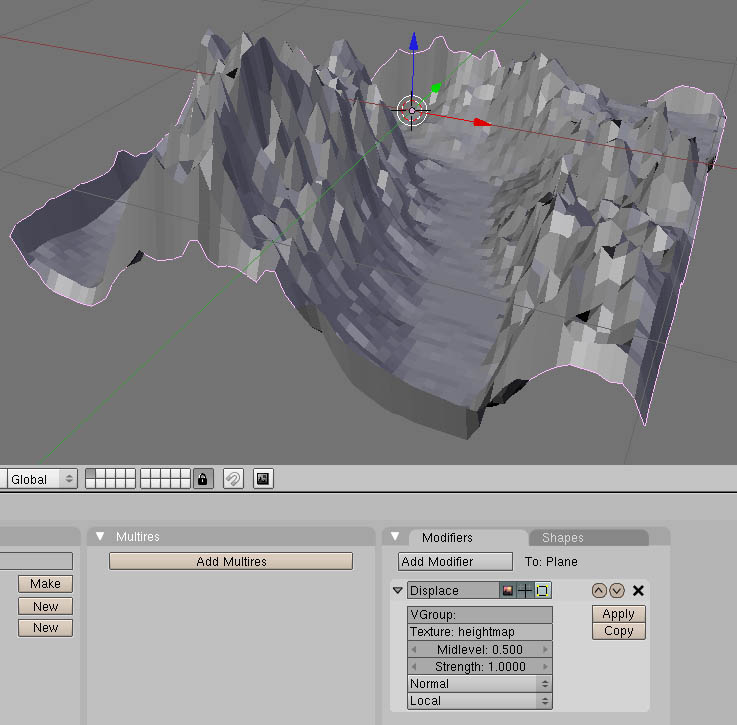 Play around with the Strength value, as it changes the intensity of the displacement.

As you can see though, it might be too low resolution for what you want. I want my mountains to be smoother, so this is where I click “Add Modifier” again, and add a “Subsurf” modifier. This will put the Subsurf at the bottom of the modifier stack (which means it will subdivide the plane after it has been displaced into the mountains). If you have the subsurf modifier below the displacement modifier, it will smooth out the mountains, while if we put it above the displacement modifier, it will give the mountains a finer detail with a much more rough appearance.

You can use more than one subsurf modifier, as well. Here’s what I came up with: a subsurf on the top of the stack to get enough detail on the mountains, the displacement modifier in the middle, and then another subsurf on the bottom to smooth the final result a bit. You have to be careful with the subsurfing though – you can easily over do it if you’re not careful.

My final result and modifier stack: 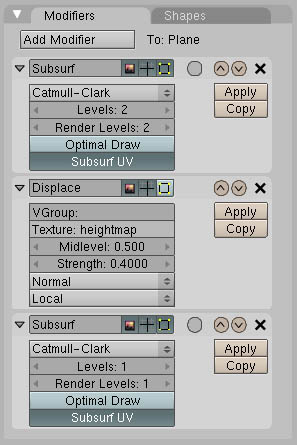 Not at all, thanks for the explinations :). Ill have to try it out. Edit: where would be the best place to either get or a program to make height maps with?

Hmm… well, I found my height map by just going to Google Images and searching for height map. If you want to create your own, you could look into the free program Terragen (http://www.planetside.co.uk/terragen/). I haven’t used it in years so I can’t help you with any specifics, but I’m pretty sure you can make your own height maps with it.