Hey guys, have pased a long time since i’ve not been in this page, nice to come back after months

Anyway, this time im going to develop a free FPS called ‘‘Hellfire’’, mostly because my dad told me ‘‘If you want to develop a game and finish it, do something that your brother’s can play or your school mates’’ so i thinked about it, and started to think about a Halo-Crysis-Battlefield stylish game, then came Hellfire, so, here is the history of the game:

HELLFIRE -The history of the Council

Everything started in the first days of the human evolution. After some time, a second type of human was created, the Homo-chronus. This humans showed a amazing intellingence, even if they didn’t evoluted from too much years, but there were a lot of differences between them, and the Homo-sapiens, fisical differences. They well taller, they’r mouth was divided in 2 sides, they had 3 fingers, and they’r head was variable depending of theyr ancestors. But one day, something happened, an old alien civilization named ‘‘The Restorers’’ took all the Homo-chronus specimens, leaving only, the Homo-sapiens.

The Restorers did genetical changes to the Homo-Chronus, they’r tissue changed color, they were stronger, more intelligent than befero, but that wasnt what the Precursors were searching, so they took all the Homo-Chronus to the planet ‘‘Thora’’ wich means in Precursor language, Wonder. There, the Homo-Chronus, divided in various species: The Kihjar (Gladiator, and also the most used of all the species in military operations), the Mhine (Runner), the Fhuen (Iron giant), the Gruak (Longwatcher), the Yie-Hu (Shortcaster), and, the most important of them, the Khure (God’s). The Khure were the most intelligent of them, and also the most agressive.

Thousand of years passed after the Homo-chronus reached Thora, each species had differents technologys, but each one was powerfull. Knowing that they were a powerfull civilization, they all joined and formed ‘‘The Council’’. The Council was going to be directed by the only 5 survivors of the Khure specie, since they were all destroyed in older wars. By the agressivity of the Khure, they asked several other Civilizations to join the Council, some joined, but others not, wich by consequence, the Khure tought that they were usseles and they all were destroyed, exept one, The Terran Empire.

HELLFIRE - History of the Terran Empire

The Terran Empire are acutally the Humans. Years of contaminating the Earth forced them to search a new home. The first planet that they found, was Aio, a planet that was more perfect than Earth, far from the imagination of all the Humans. The Earth, now all freezed into a new Ice age and also, abandoned, now is just like a endless desert of ice, snow, and old secrets of the past of the Humanity.

The Humans continued the search for Intelligent Alien Life, in the year 2451. Hundreds of years passed, untill in 2795, they got an answer, and that answer surprised them, it was a message saying ‘‘We are not evil, we just want you to join us’’ encripted in an old language that even the old humans knew- English.

Since that encounter, the Humans searched with exitment the source of that message, resulting, the finding of a lot of Earth-like planets. The finding of this planets made the humanity call themselfs ‘‘The Terran Empire’’.

It was Around 3042 when they found the only Intelligent Life in the galaxy- The Council.
The Council first asked them if they wanted to join them but humanity seeing that it was a bad idea, rejected the offer, wich resulted in a war between The Council and The Terran Empire, this war keeps going until this day, 1 of January of 3532.

HELLFIRE - The History of Erick Denison

The history of the player starts around 10 of february of 3525 when he joined to the UMC (United Military Coalition) to fight the Council in the planet Aeon. This planet was the first planet attacked by the Council in Human territory. Erick showed a great bravory in his battles, and thanks to this, he entered the ‘‘Hellfire Program’’. This program objetive was to turn normal humans to powerfull warriors capable of driving any vehicle, using any weapon, and finish the war.

This program had it danger, only 400 of the 13000 soldiers, survived to this program, incluiding Erick.

When Erick was turned to a ‘‘MK IV Warrior’’ (The MK and the IV are the rank of him) he and another MK IV Warrior named ‘‘Sarah Anderson’’ were sended to thousands of missions, as a team.

The Erick’s brother, Mike Newman, was also turned to a Nano Warrior, he was the only family that Erick had, since all his family, was killed during the war in Aeon.

It was around 1 of January of 3532 when Erick and Sarah were sended to evacuate the planet, since the Council troops were unbeatable. Mike stayed in Aeon to make a path to let the Exodus (Ship were Erick and Sarah escaped) get out of the planet. Till now, we dont know if he died or survived.

When The Excalibur blade got out of Hiper space, they were not able to belive were they were- The Earth. Instantly The Council sended several Ships to pursue the Exodus. After a long battle, the Excalibur Blade sended several teams to explore the Earth to find something about their past, this is were the Adventure of Erick and Sarah begins…

The objetive of this game is reveal why the Earth has a lot of weird structures on it, and why it is a T3 (Type 3) Planet again. Actually the Earth will have all this structures because of the Restorers. They had a huge war wich divided them in 2 sides: The White Restorers, and The corrupted Ones. This war was set a lot of time ago, when the White Restorers dominated. After the Earth was abandoned the Corrupted Ones made it their own base, and started modifying it to make it their home, and a lethal weapon against their enemies. After it was used against the White restorers, it left a huge destruction to their empire, and only a pretty little number of white restorers survived, wich some of them you will find in the game. The Corrupted ones abandoned the Earth, and it was aimed to Destroy the Humanity, since the Humans, are the last White Precursors (later i will say why). But since the weapon needed a Huge a amount of dark energy, it aimed to fire in the year 3532, to be exactly, it was aimed to fire at 4 of January of 3532. The real objective of the game will be destroy the Earth with a super-weapon called ‘The Salvator’, a Huge White restorer weapon that was made to destroy this weapons.

Hellfire is planned to be a Epic FPS, wich will combinate Strategy, Teamwork, and skills. I’m also planning to add some sad moments, like the dead of your teammates, every one exept Sarah, wich if we continue the game, will die in Hellfire 4.

The player is going to be able to drive a good amount of Vehicles, like tanks, airships, Fighters, Mechs, APC’s, Jeeps, and a lot more.

The game will not contain any gore, it will contain blood, but no limb-blowing up

This is a Hawk, a heavy troop transporter helicopter, it stills in WIP, im sure i will finish it: 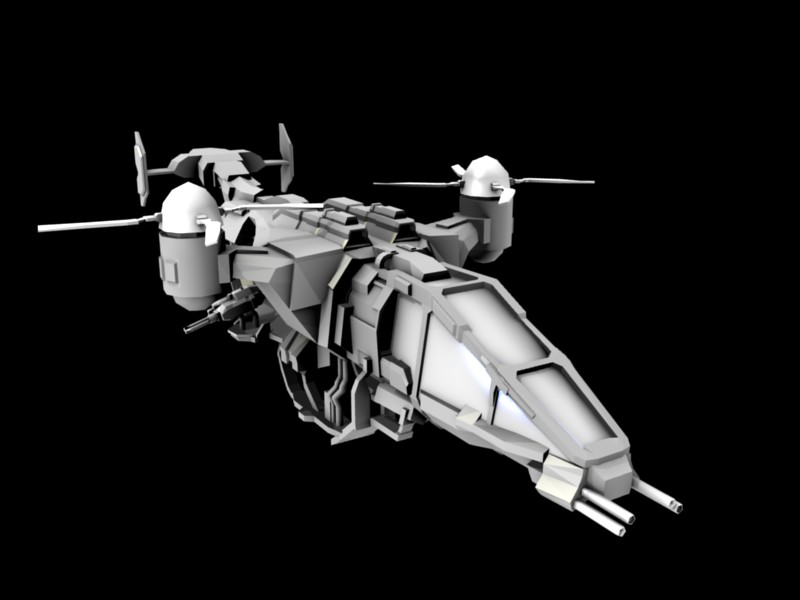 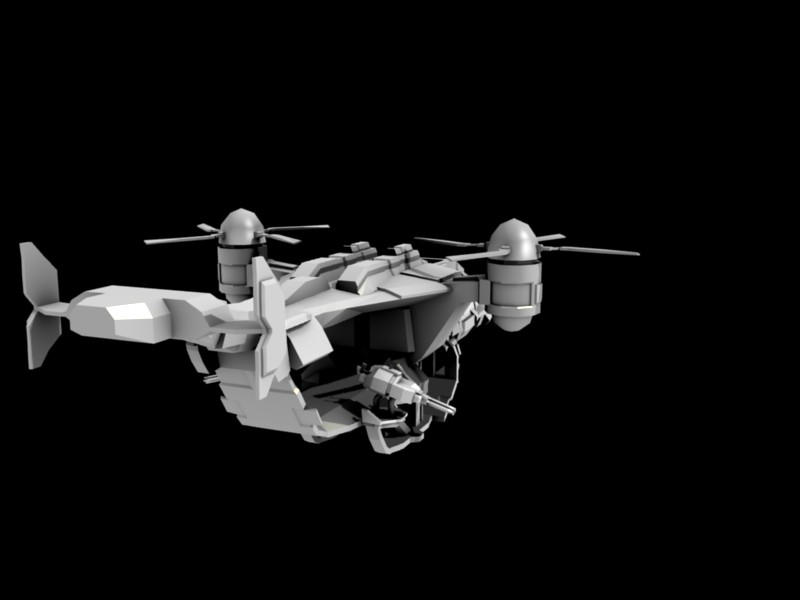 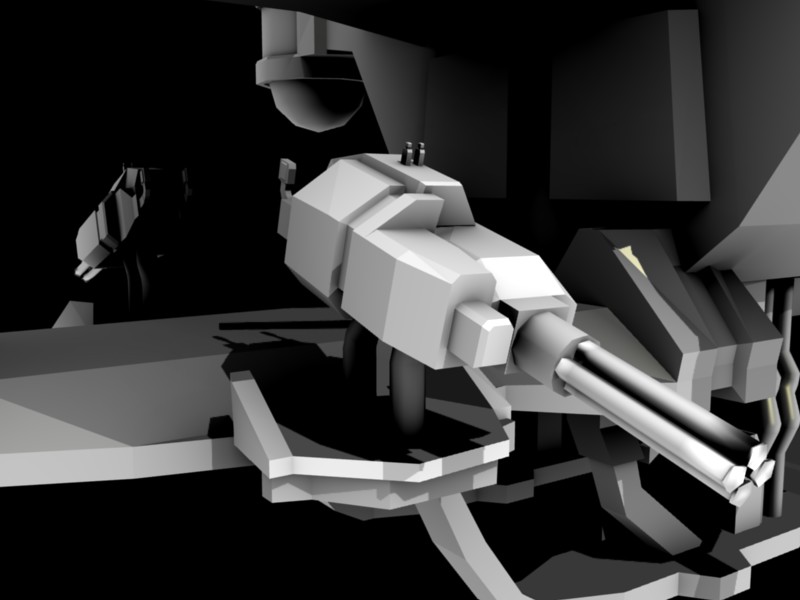 dan good info. can i join the team.

I would love to join the team, looks like a really good story to go on.

I would love to join the team, looks like a really good story to go on.

Well, what can you do?, i now need Concept Designers, Texture Artists, Music Artists, Organic Modelers (To model Stuff like Humans, the Council Soldiers, Nano Warriors), Phyton Programmers, Voice artists, sound artists and all that stuff, if you want to join the team, you have to show me some of your work and what you can do

can i be a modeler.i cant realy put any work up becuse im on my psp.but u can look at my work on other posts i posted on [team]

can i be a modeler.i cant realy put any work up becuse im on my psp.but u can look at my work on other posts i posted on [team]

You should give me a link to some of your posts, i cant fine none of them :S
Anyway, I did a lot of models in this days, i also tested one, so here are them: 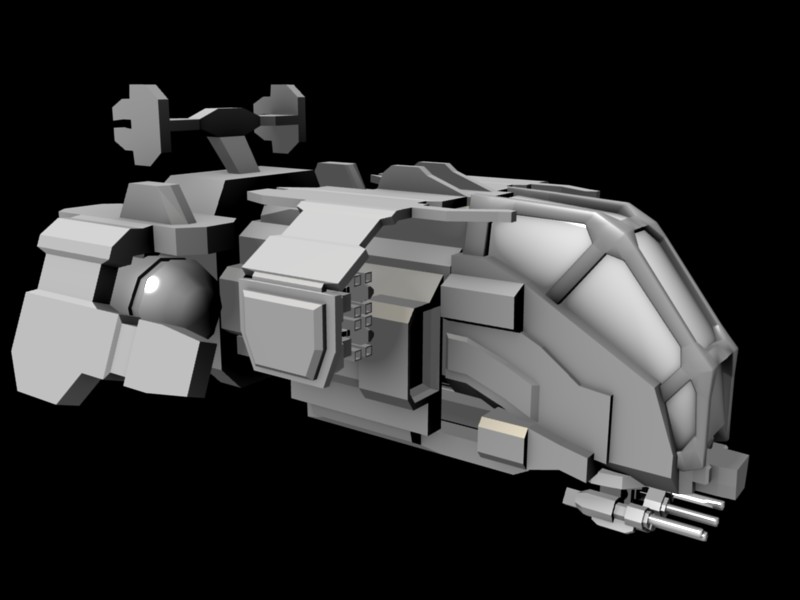 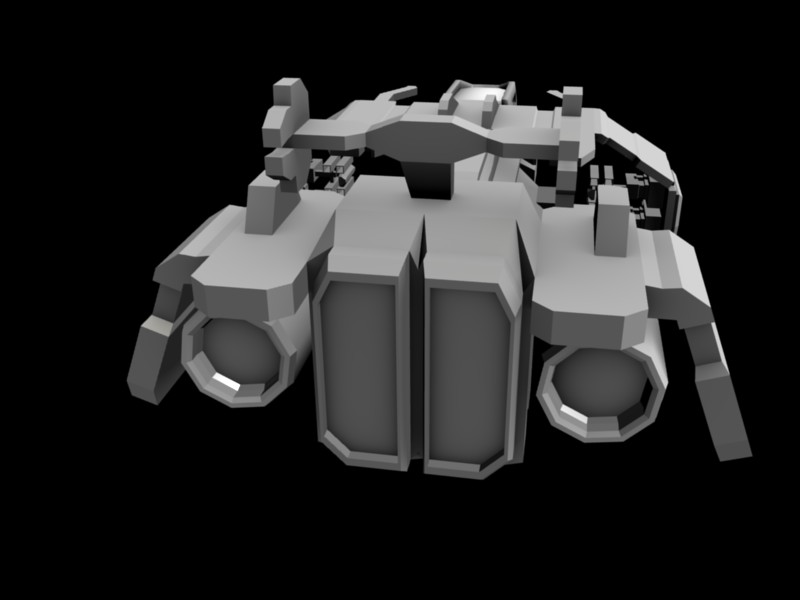 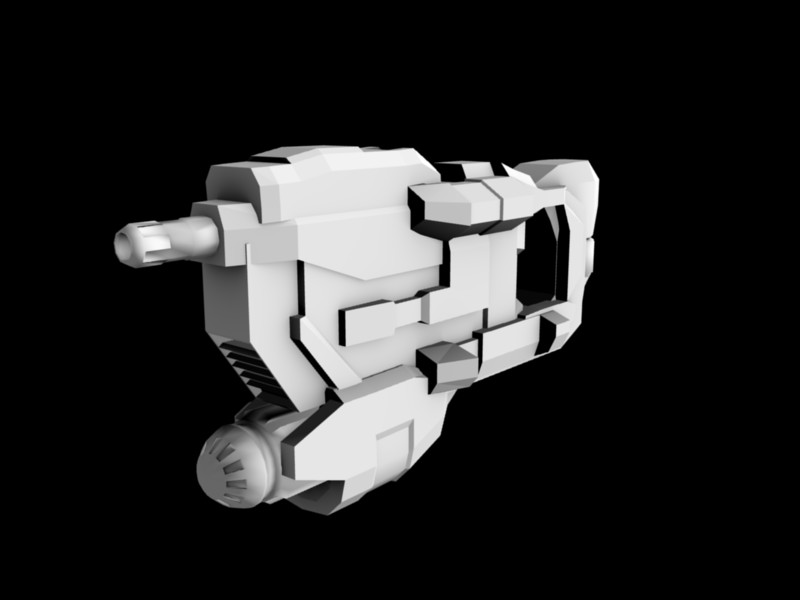 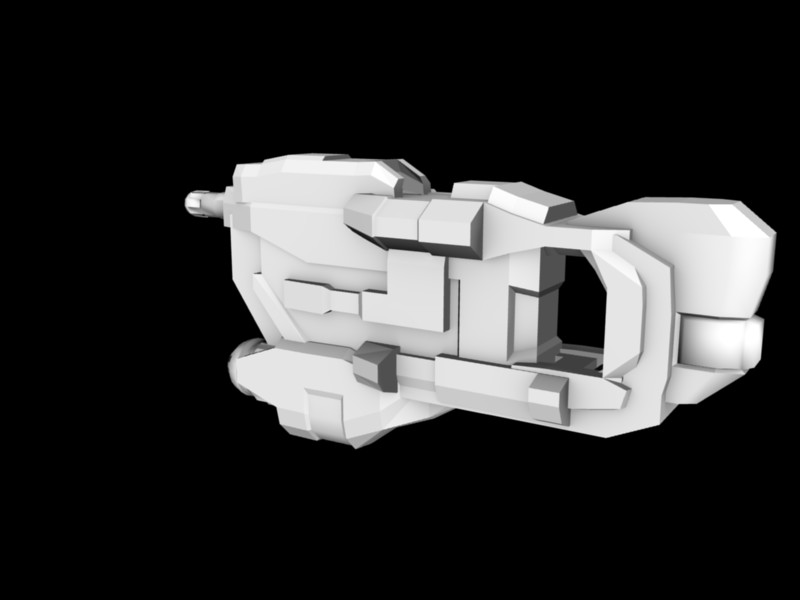 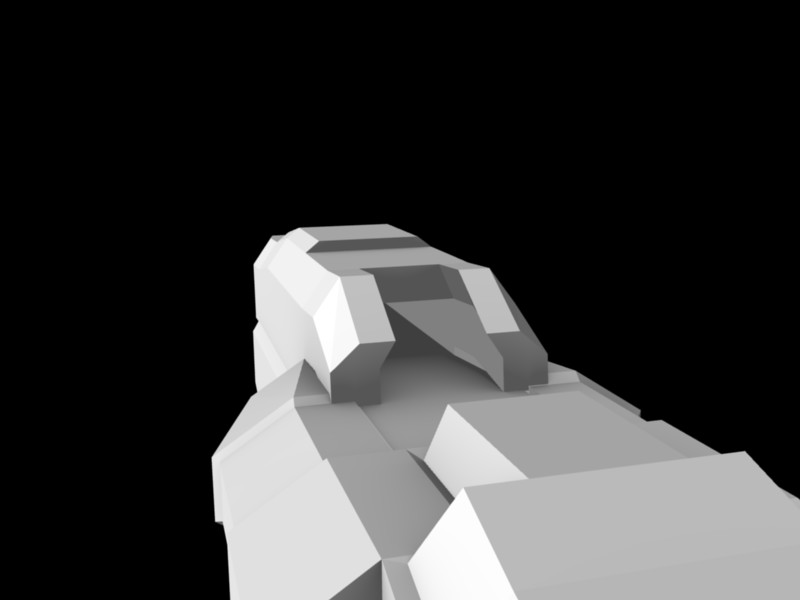 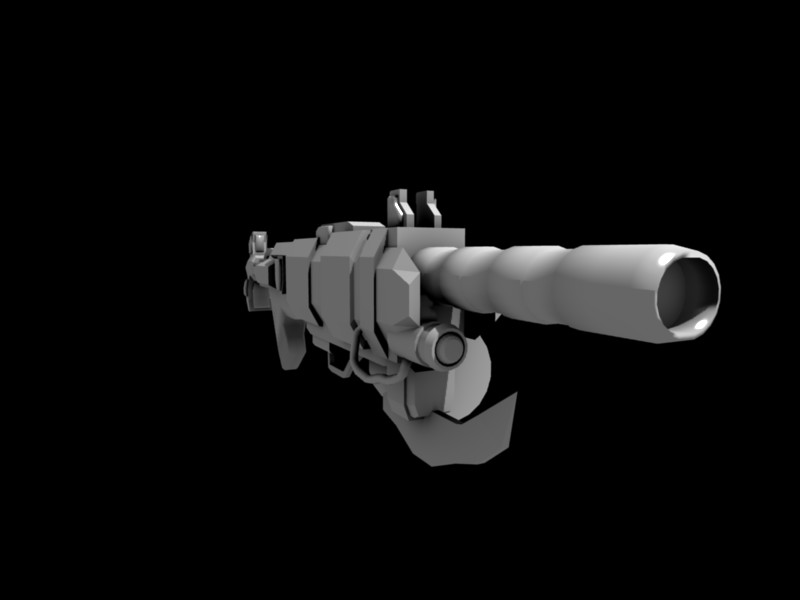 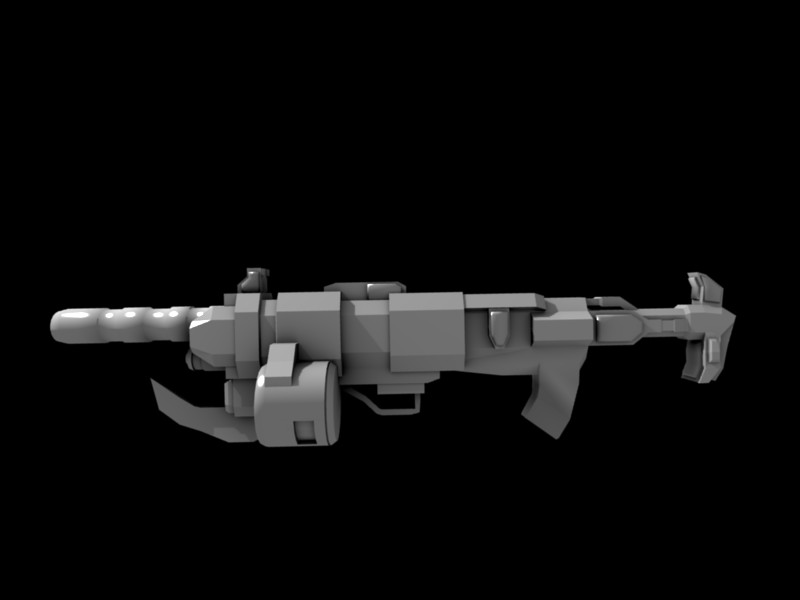 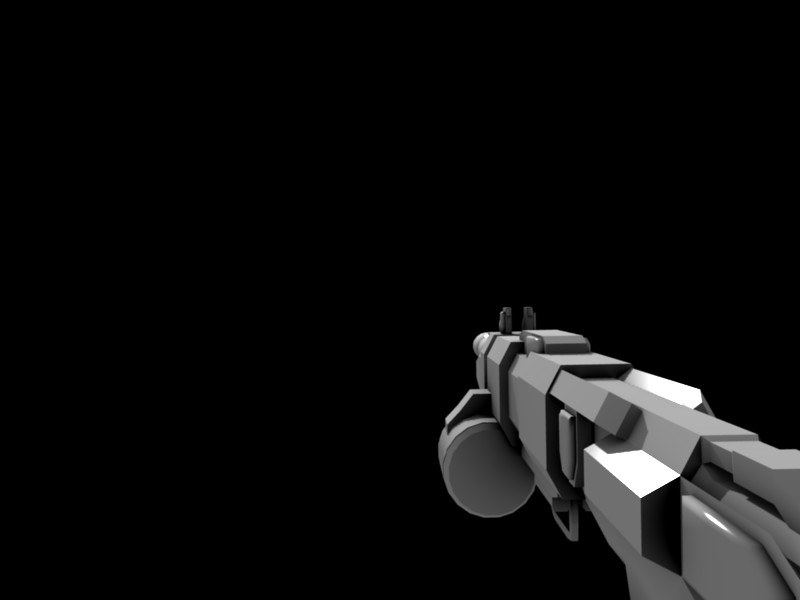 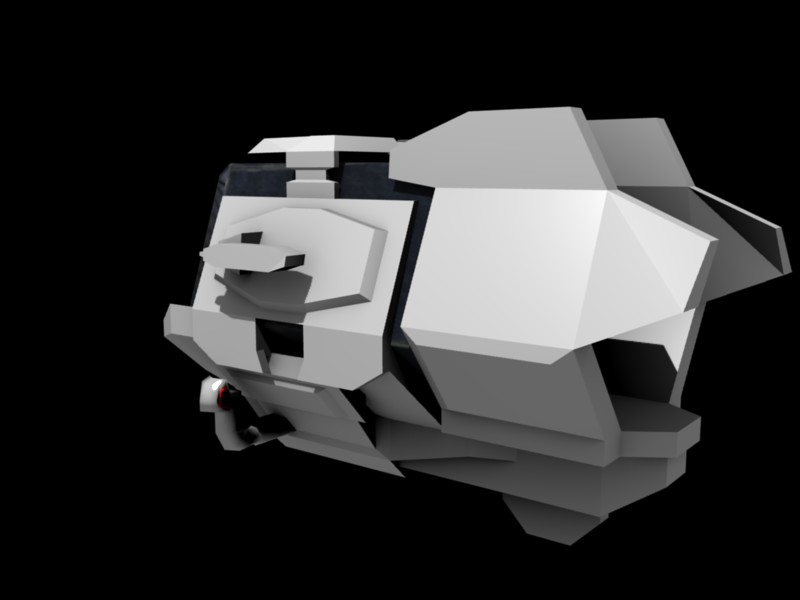 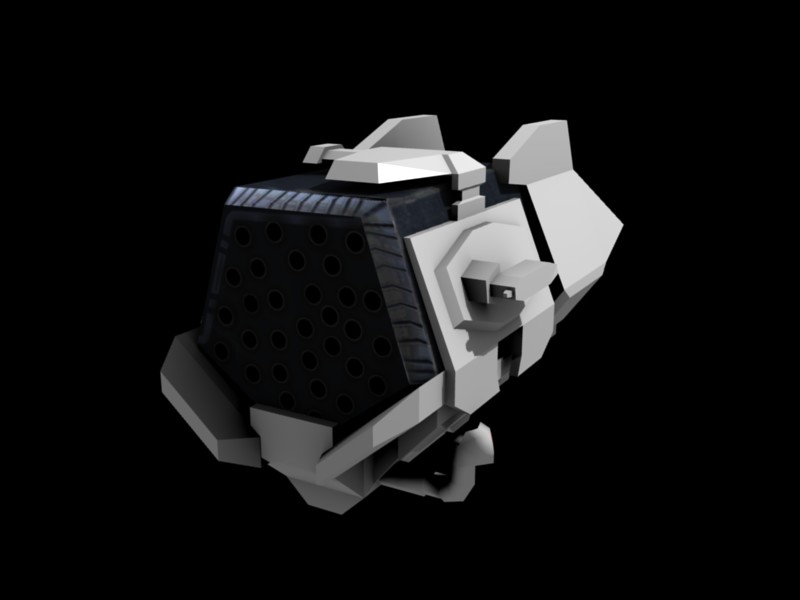 This are the Swarm Missiles, they track the closest enemy 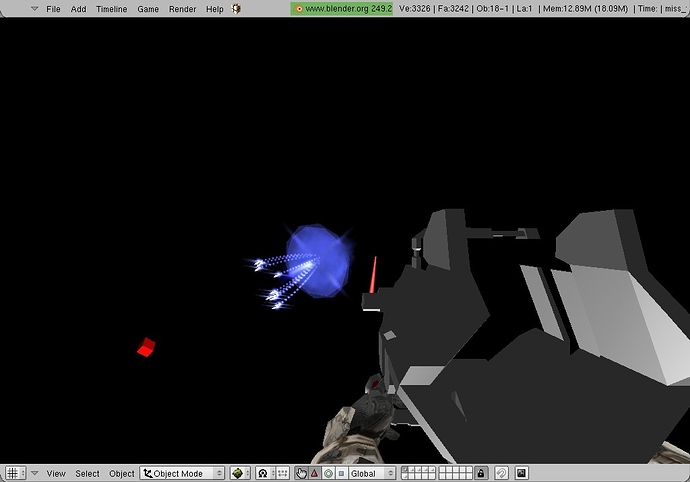 Gosh - those weapon models are great! How do you do that?!

(I would join, but I really am new to Blender)

I may be able to contribute to the storyline, because I am a good writer. (No promises though)

Gosh - those weapon models are great! How do you do that?!

(I would join, but I really am new to Blender)

I may be able to contribute to the storyline, because I am a good writer. (No promises though)

Thanks, the way to do the weapons is just simple and requires 2 things-
Imagination and Sense of enviorment
Just to imagine the whole enviorment on the game, how it will be is just enought to know what weapons are going to be there

And also, welcome the team dude :), im gonna change the history a bit to this:

When The Exodus got out of Hiper space, they entered to unkown sistem. And found a planet very similar to the Earth, but it was all green and beautifull. The Commander Cosgrove (Another Nano Warrior, wich is the captain of the Exodus and also, the father of Sarah), ordered to wake Erick and Sarah up from Cryo-sleep to investigate the surface of the planet to find out wich dangers it had and if it was able to be colonized, but when Erick and Sarah were waken up, the sensors picked up thousands of Hiper Space Signatures - A Council fleet wich came out just in front of the line of route for the Exploration transports.

The commander Cosgrove ordered several Nano warriors squads to destroy the Super-Carrier wich was also the Flag ship of the fleet. Without it, the Fleet would fall and would have to get to Thora for reinforcements. Erick and Sarah made team with other 2 Nano warriors - Frederic, a Lone wolf wich is the sniper and Krosinov, a russian Nano warriror wich is specialist in Alien biology

They also made team with Commander Cosgrove, wich lead them to destroy the Carrier
After the fight, they landed on the planet and found a huge surprise…

Wait - so Exodus is the ship/team/group of people with Erick and Sarah? (I just got to get a firm understanding of the main storyline before I start anything)

Wait - so Exodus is the ship/team/group of people with Erick and Sarah? (I just got to get a firm understanding of the main storyline before I start anything)

Woops, looks like i forgot to edit something, the Exodus is the ship were Erick and Sarah are, i changed the name to that one cuz ‘‘The Excalibur Blade’’ sounded a bit…Mhhmmm… ‘‘childish’’

Oh and i made some great stuff during this time: 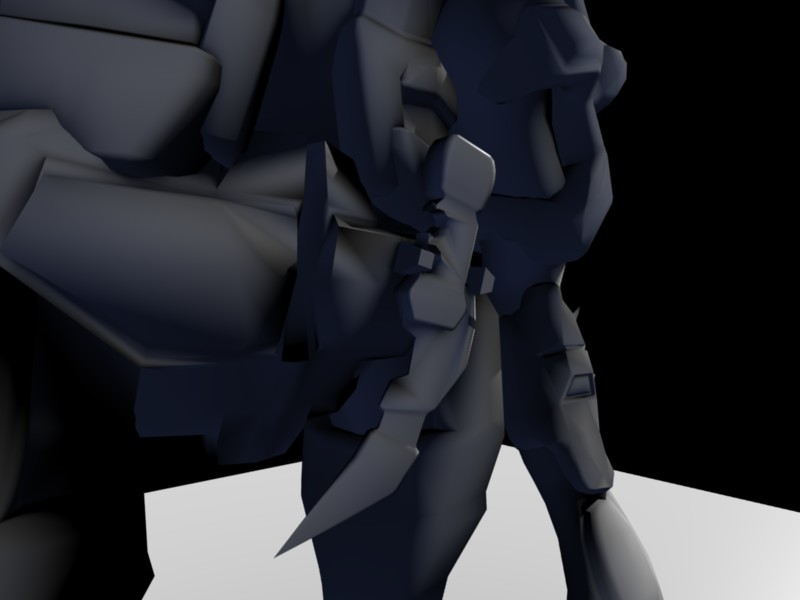 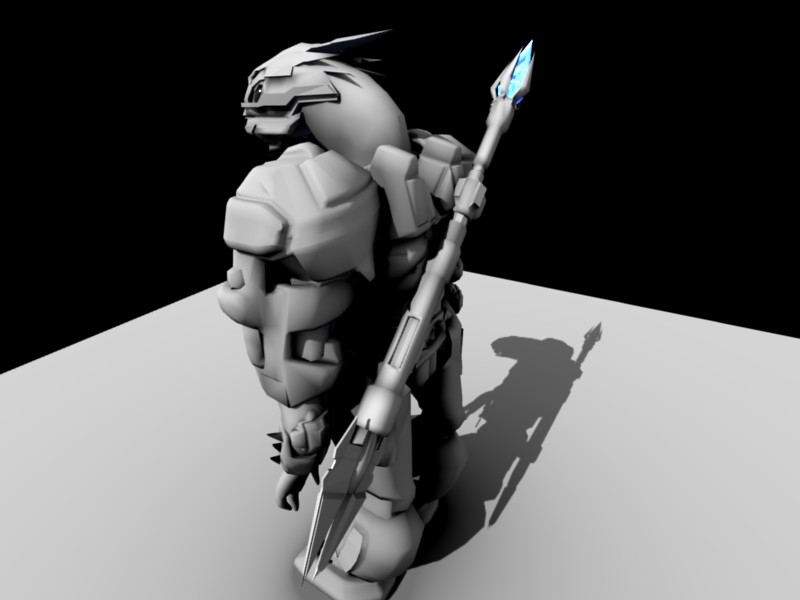 Some other Screens, i also forgot to mention that i recently finished to rig the model: 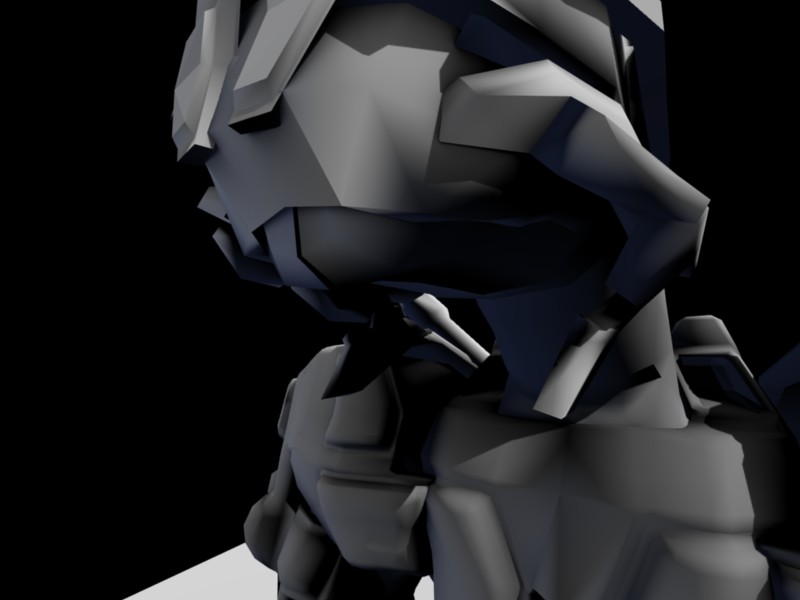 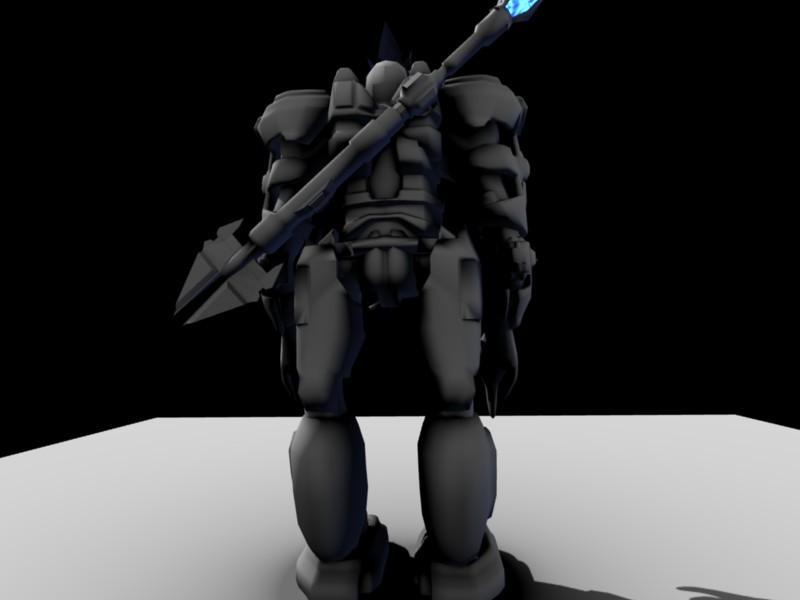 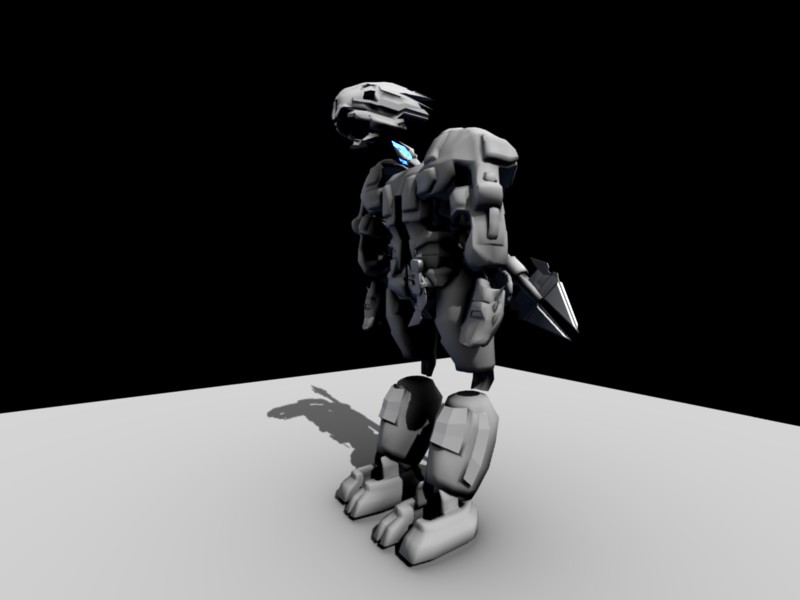 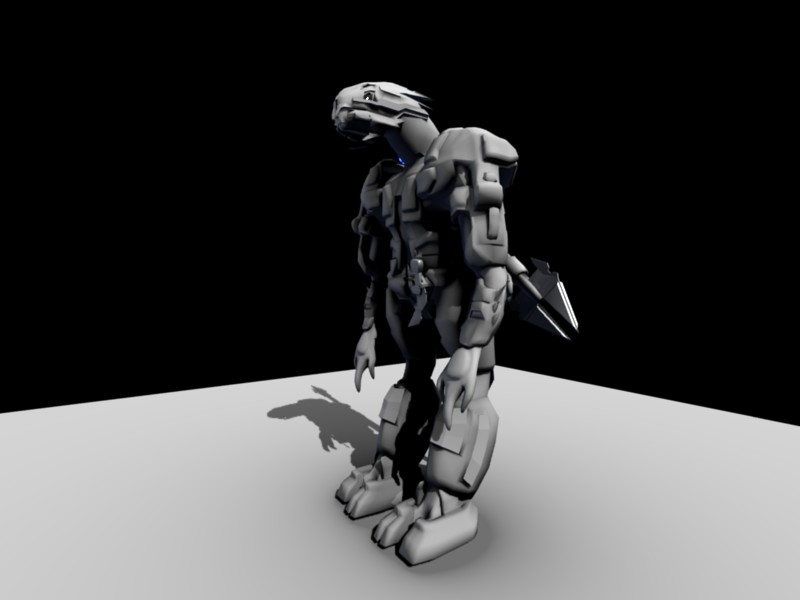 Some tests, i was testing the armature and some posing techniques (I also found out that the hands were in the wrong direction -_-) 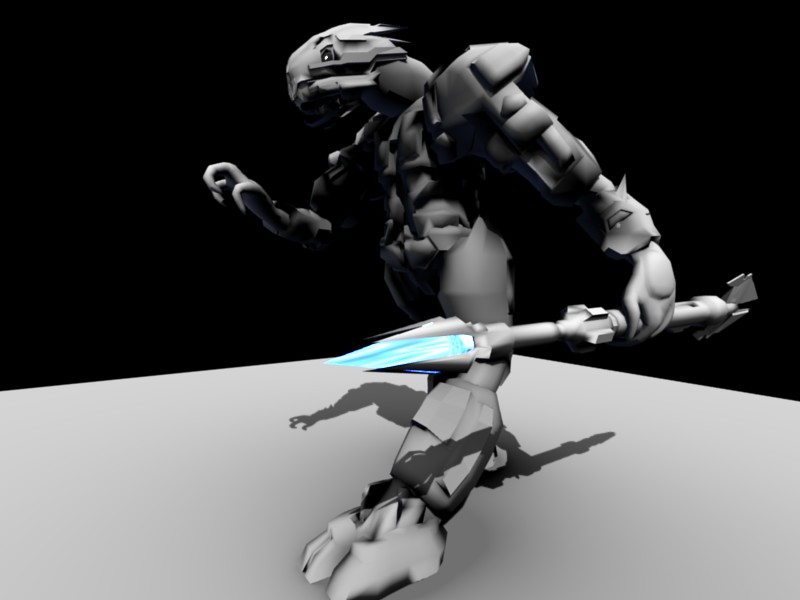 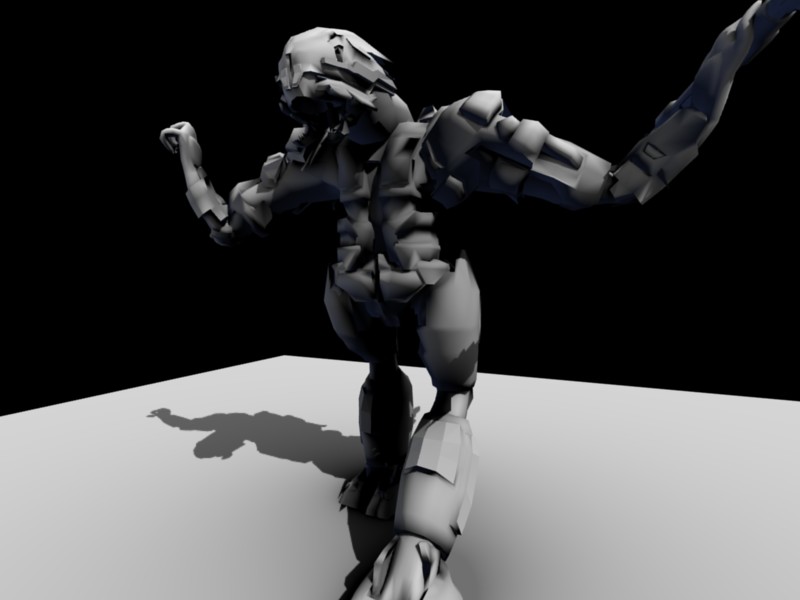 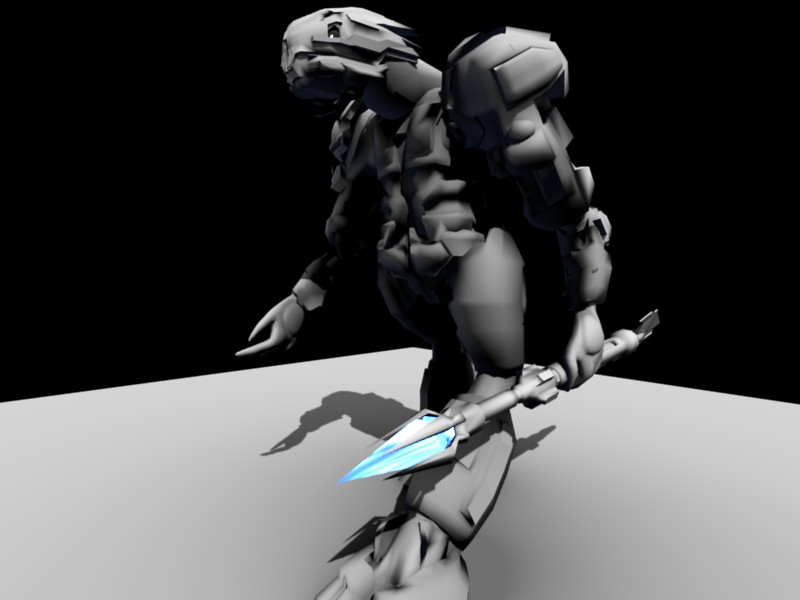 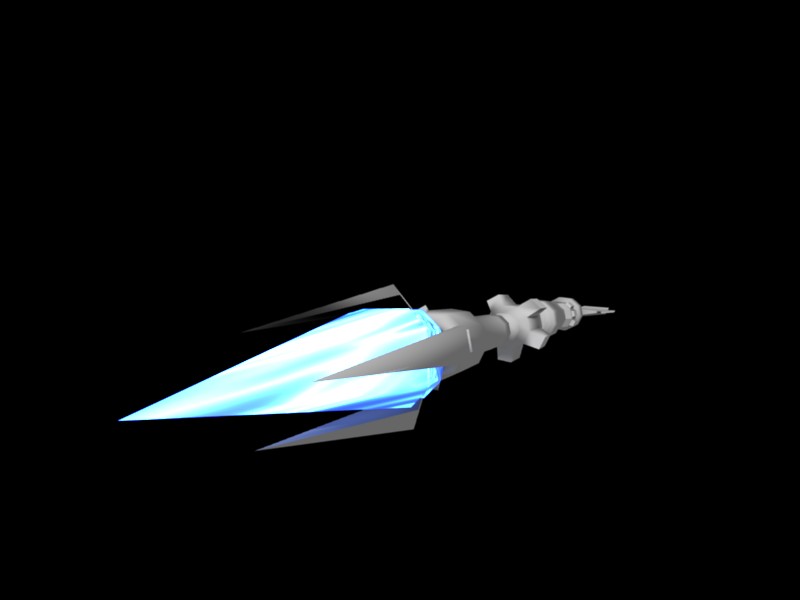 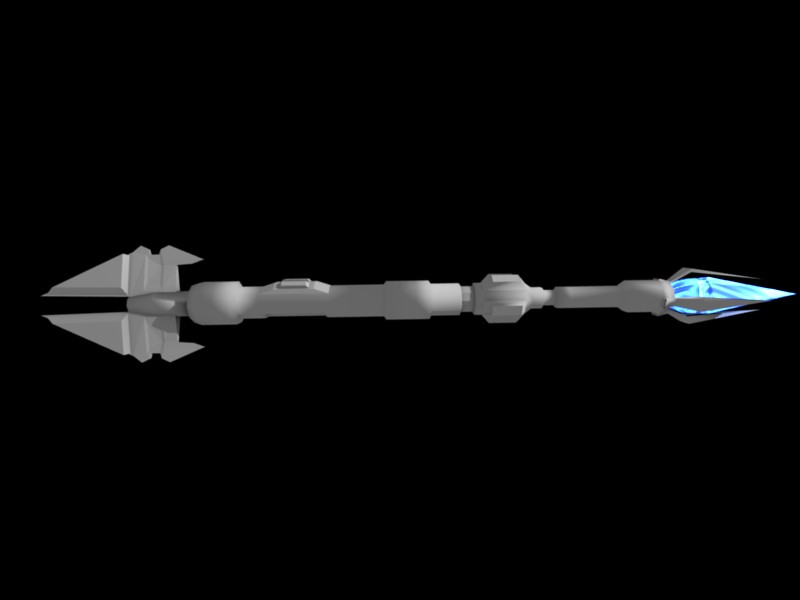