I’ve got the central part of the wheel pretty much done, but I’m having some trouble getting the tires to look like the real tires on the sportsbike.

And mine are currently blank: 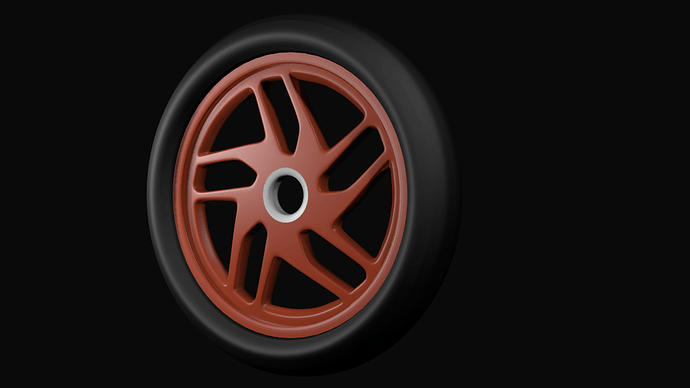 Here is one way: 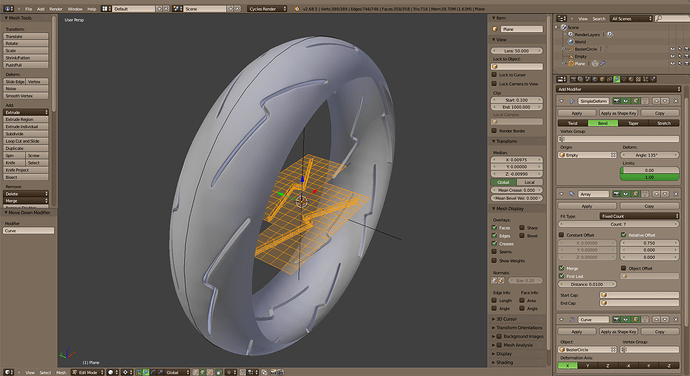 A plane (in which I extruded the pattern) with a few modifiers: Simple Deform (Bend), Array, Curve and SubSurf. Note that all the modifiers (except SubSurf) must be applied to merge the vertices at both ends of the array. (We miss a Remove Doubles modifier.)

Another way is to use a bump map with the Displace modifier. You just need to draw a tileable version of the pattern in black on white with A LOT of blur, unwrap, vertex group, SubSurf, and Displace.

but not certain how this bend modif one is used here ?
would you upload sample file for this one
like to analyse and understand it

nice to see a new way of doing it !

It’s much easier to work on a plane that on a curved surface… so I use the Bend modifier to make a torus from the cylinder that the Curve modifier alone would produce.

And you’re lucky, I almost didn’t save the blend file! The geometry is really crappy… I just pushed the SubSurf higher to hide the mess.

THIS IS perfect. But I still can’t exactly figure out how you did it. Could you maybe include a list of steps or something??

i tried to follow it and stil don’t see what this bend modif is doing
i mean i can see it is changing the shape but why ?

is it just to modify the plane and what is the goal for the empty ?

@Owatch: I started with a plane that I subdivided evenly. I selected a vertex at one end of the zigzag and extruded 3 “floating” edges to draw the global shape. To make things easy I made sure that both ends were over another vertex and the 2 middle points over an edge.

I subdivided the 2 edges under the 2 middle points and moved the newly created vertices in position. I deleted the “floating” edges. I joined the 4 points of the zigzag with [J]. (Blender cuts all the edges in between as needed.) A bit of cleaning all around, especially to remove the tiny triangles.

I selected all the edges of the zigzag and used [CTRL B] to make faces instead of edges. A bit of cleaning all around again to remove the tiny triangles, to fix the overlapping corners, and to give a better shape to the zigzag.

After that, I simply selected all the faces of the zigzag and extruded them down. To make things better for the SubSurf, I added a bevel all around the hole. (Here, I should have cleaned the tiny triangles again… but I didn’t.)

A mirror modifier for the symmetry. I applied. I shifted the 2 halves, removed the doubles and recalculated the normals.

And then I could start to add the modifiers. The Bend is a bit tricky… because I never remember which axis of the empty it uses.

Nothing to say about the Array modifier except that it’s better to stay with “Fixed Count”. (Just leave it at 2 until you have your curve.)

I added a Circle curve. I scaled it, rotated it.

I added the Curve modifier to the zigzag plane and increased the count for the array until things fit approximately.

Then I carefully resized the zigzag plane in Edit mode along the X axis until both ends of the array were correctly joined. (Alas, the “First Last” merge option doesn’t work in this situation.)

Finally, I added a SubSurf modifier to make everything smoother.

Thanks so much mate! Sorry for replying late. Got a lot of work on my hands aside from hobbies