Hello, I am struggling with this project for so long. I would be grateful if someone could tell me what to do from here.

I have made a dragon egg by making 1 scale and putting an array modifier on it, and then a lattice deform. I applied the array and lattice deform, and now I have a single mesh with many scales that are intersecting. I Want to remove all the inside parts. I only need the outside shell. I need a manifold shape to use for 3D printing. You can see my attempt at cutting off the edge with a boolean modifier “base” below. As you can see, this reveals the interior mess of the inside of the scales. I have saved this file in increments, and can go back to before I applied the array. I am wondering if there is a way to make the scales merge in a manifold way in the “apply array” operation (hooking “merge” did not do it for me) Thanks in advance. 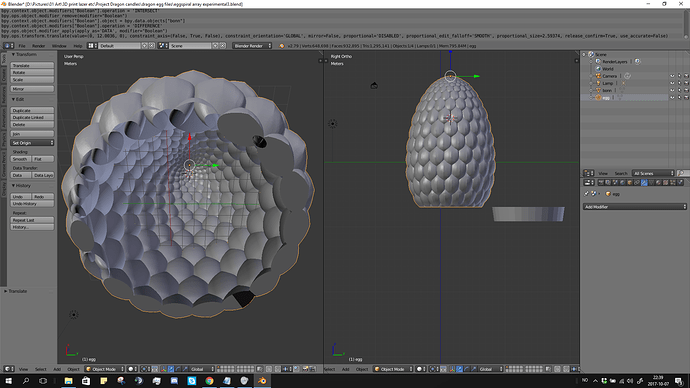 Maybe a displacement map applied to another base shape would help?

The aim is to reduce the number of intersections that need to be calculated at one time as well as reduce the area of surfaces that intersect.

If you still can’t get it to work, you could try cadspan. Its designed for creating printable files from complicated geometry … there’s a trial available:
http://www.cadspan.com/

Thanks for the suggestions.
While a displacement map is a good idea, I don’t think it gives the desired effect I am looking for. I have seen workflows to make dragon eggs with displacement maps and they are not perfectly accurate like I have been working towards.

I’m still a bit new to blender so bear with me. But I can’t figure out how to get the scales from the array modifier to become separate objects so I can use them for gradual booleans. The individual scales are manifold, so I was assuming there is a method to combine them together in a way that only leaves the “outside”, and not have the intersecting parts where the scales overlap. I would assume this is what the “merge” button should do, but it doesn’t appear to do so, (I have no idea what it DOES do).

I attempted to just select the visible vertices and revolving the model. This almost worked, but it left out too many vertices and such my model became too full of holes, patchable, but again, too inaccurate. 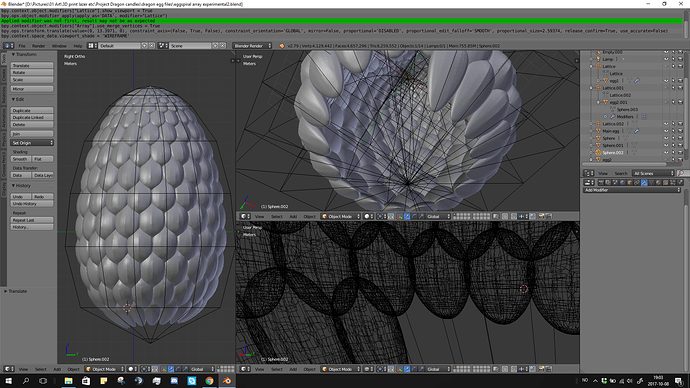 Could you upload a blend file? this is a nice testcase for a new tool that removes interior geometry.

Hey, thank you for your interest. My file can be found here. https://www.dropbox.com/s/kprrg7jdxvc95uc/eggspiral%20array%20experimental3.blend?dl=0

Hey, I’m still having problems with this. I would like to use arrays as part of my workflow, but if I can’t make them manifold in blender then it limits what I want to do with 3D printing. Does anyone know of any third party software that can do this kind of thing? (by this thing, i mean able to look at only the outermost part of a model/sculpture and make a new mesh out of that maybe, to see it as we humans do sort of)

There is no need for other software. ZBrush can do it quite well with dynamesh and booleans, but I seriously doubt it that you will find it easier to learn working with ZBrush even if buying it for this would not be a problem for you. My recommendation would be to just model it properly. You need to model the array objects so that they end up with only surface and matching vertices. It’s not that hard when you have the array modifier visible while modelling. You would want to work with less geometry and less points to move around so subsurf should be used AFTER work with arrays is completely done and finished.

Although I mentioned it earlier in the thread, CADSPAN has not improved at all since I tried it many years ago. I would say Netfabb is still the best in its price range. Unfortunately its now available by subscription only it seems.

Its possible 3D Coat or ZBrush might work, but I have not tested them myself. I do see a lot of people using both applications to generate some fairly complex prints with shelling and booleans, so they would be worh a look as well.

essellate Tessellate tool allows you to copy a selected object (Component) on the faces of the active object (Generator), adapting its bounding box to the shape of quad-faces. Once the Tessellate button was pressed, then more options will appear in...

There is a different approach to making a manifold mesh from what you have now. I tried it and it kinda works.

The idea is to make a smooth egg closely matching the shape of the one you made from individual scales, then shrink wrap it to your scaled egg. I tried on on a dragon’s egg I made recently for something else. The screen shot below shows the original egg and the shrink wrapped copy. (I would be glad if someone can tell me why the copy is so shiny). The copy is very high poly, but if you only need it to create a .STL for 3D printing, that may not be a problem. 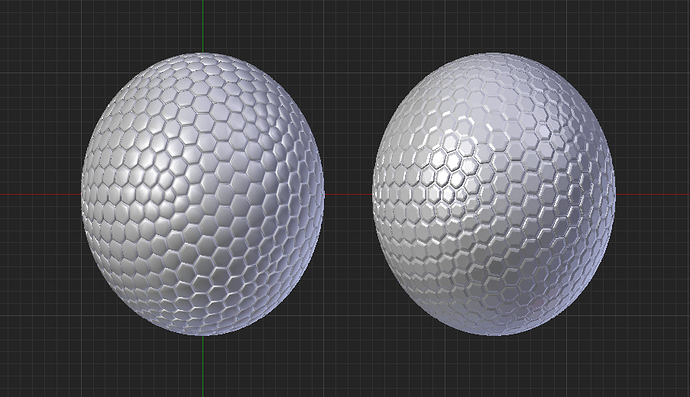 This is great information.
I don’t know if it helps the OP but it helps me a lot.

It lost a little bit of detail in the process but it probably won’t be noticeable in the print unless you are going with a high detail print. The few intersecting edges are easily fixed using Dyntopo in the Sculpting Mode, I was just being lazy. I joined the two meshes, added a round cube, adjusted the scale of it till it surrounded the egg, Sub Surf to 7, Shrinkwrap with Project positive and negative direction. Apply those and then Decimate the model to a usable poly count. I boolean the bottom off as that’s what I think you were trying to do? Anyways I can get more detailed with the description if you need me to. Hope this helps. 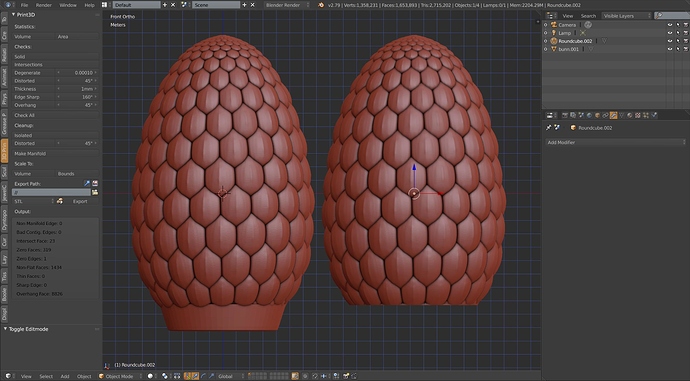 Thanks for the additional replies everyone. I especially like the shrink wrap idea, and I love the “tissue” addon. I will try it.

@DevilsDJ , I tried to follow your procsess but my result looks a little different. I would love a more detailed walktrhough if you have the time. Iespecially don’t know much about how you used dyntopo from scultping or what sort of decimate settings I need. 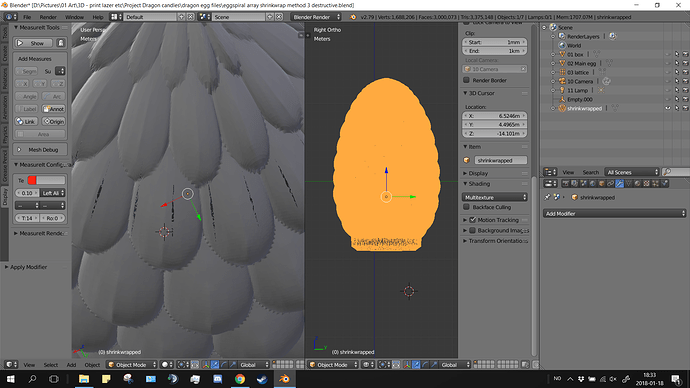