help: from radial to linear?

first: sorry, i’m not find an explain for title of this topic.
i find a video [non-blender] it’s after effect, then AE has effect “polar coordinates”.
So i wish to try with blender similar "polar coordinates of AE:
from node? i think: blender has not this effect…
from 3d mesh: i did try to model and UV from image but i’m stop here and i have not good idea for trick…

name trick is (maybe):
from rect to polar or radial
from radial to linear
not know what is best call name this trick ok?
thank you

Perhaps you should give more information about what you are trying to do.

Use a radial texture node in the compositor to set coordinates of uv disort node.
Or you could unwrap an image plane and distort it in the uv editor.

Use a radial texture node in the compositor to set coordinates of uv disort node.
Or you could unwrap an image plane and distort it in the uv editor.

A little more detail on each of these techniques would be great, 3Point… :yes: 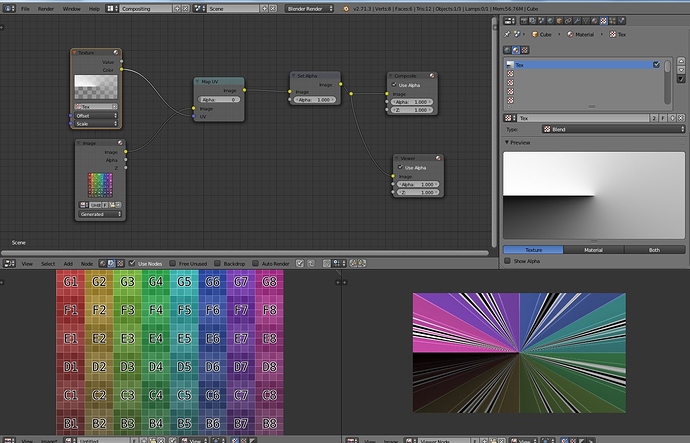 And a distorted mesh… 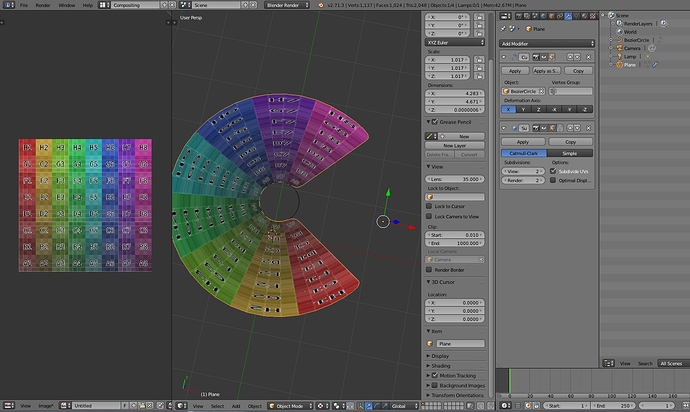 Here I have subdivided a plane a few times and UV mapped the image to it. Then I applied a curve modifier modifier looking at a circle curve (in the middle). Moving the plane rotates the wrap, while scaling it fills the polar coords.

Here is a .blend to test (you may have to recreate the color grid).
polar wrap test.blend (545 KB)

EDIT: I just realised that the subsurf mod should be above the curve distort mod. Also I need to add some edge crease around the outside string of edges to make them connect at the corners for full coverage of wrap around. And I added a mirror mod after the subsurf to make the texture repeat.

Hmmm… now, how could that then be applied to a conical (3D) shape? I could use that, right about now.

The starting shape (in my case) is a cone . . . been futzing with it for a bit, but . . . to get just the effect that I would really prefer in the shot, a radial mapping of the texture is needed. Although it was fairly late at night.

Perhaps you could pinch the centre down to change my disc into a cone? Or distort mod and target your cone.

i wish to say SORRY for LONG LATE… sorry
i was busy long time… then i can say something this topic, but first: epointedit,sundialsvc4, you did seen video? if you did seen video that i want to show you there is “interpolation” from 0% to 100% (timeline video 00:20) for this i wish same tip and trick for blender from AE ok? so mode node have not similar “polar coordinates” that effect from AE is ready to use it but blender is not “ready to use it” need to manual to modeling, but i dont want to say but i want to say there is SIMILAR or SAME tip and trick for BLENDER: YES or NOT, for this i need to ask all you ok?

that epointedit done an example to show us, i want to say THANK you for show to us, and i want to ask again this topic for precise and other tip and trick ok?
ok?

then i try say for various mode but before of all please go to see site wiki:

This list provides an overview of some of the significant or common map projections. Because there is no limit to the number of possible map projections, there is no definitive list that includes all of them. Plate carrée: special case having the equator as the standard parallel. The Mercator projection is a cylindrical map projection presented by the Flemish geographer and cartographer Gerardus Mercator in 1569. It became the standard map projection for nautical purposes because of its ability to represent lines of constant course, known as rhumb lines or loxodromes, as straight segments that conserve the angles with the meridians. Although the linear scale is equal in all directions around any point, thus preserving the angles and the shapes of small objects (which make... The term "normal cylindrical projection" is used to refer to any projection in which meridians are mapped to equally spaced vertical lines and circles of latitude (parallels) are mapped to horizontal lines. The mapping of meridians to vertical lines can be visualized by imagining a cylinder whose axis coincides with the Earth's axis of rotation. This cylinder is wrapped around the Earth, projected onto, and then unrolled. By the geometry of their construction, cylindrical projections stretch dist... -from linear to radial = from straight line to circle, it’s possible? YES that epointedit did showed before reply “And a distorted mesh…”

-from circle to straight line = AE “polar coordinates”–>> interpolation to 100%

-other mode for change project ok? for now i need to know if Blender can does it? under tip and trick ok?