Help me understand the Ambient occlusion in World tab

I always thought AO would just darken areas in corners, yet the AO checkbox in the World menu does this while also brightening up everything else. 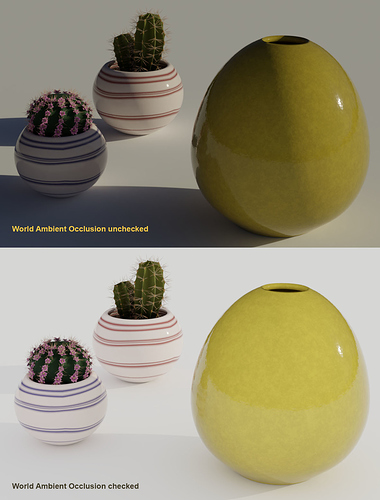 I actually like the result, but it’s counter intuitive to me, help me understand this behavior, perhaps this is normal and my expectations are wrong. I normally do an AO pass and add it in post where it will not brighten but darken parts of the image so this is where my confusion lies. I know Cycles does not necessarily require an AO pass but I’m still playing around exploring the renderer.

I believe the World AO is added to scene while in comp you would usually multiply with it to darken the corners.

It’s used as fake overall indirect lighting and affects all diffuse shaders. It adds to the light which doesn’t interfere with direct lighting. Multiplying would have more prominent effect, especially on an area where there’s very little ambient light but still receives direct light.

If there’s no ambient light on an area and it would get multiplied, the diffuse value would be 0. Then lighting that surface with a flashlight would show a full black surface in direct lighting, instead of full white surface without ambient light.

Personally I think World AO in cycles is evil…
But you can set it there, deactivate it and activate AO in the render passes , then multiply it on top of your render using the compositor if needed .

As you’ve guessed , AO is an old cheat to simulate GI shadowing in renderers that aren’t using GI. With cycles you don’t really need it, (I often try to use the AO pass but I don’t find it add something to the render). Maybe it’s interesting to have if you want to composite CG over a video sequence.

It’s a trick. It’s a cheat. :yes: And, it can be very handy. From the documentation:

Ambient Occlusion is a sophisticated ray-tracing calculation which simulates soft global illumination shadows by faking darkness perceived in corners and at mesh intersections, creases, and cracks, where ambient light is occluded, or blocked.

There is no such thing as AO in real life. AO is a specific not-physically-accurate (but generally nice-looking) rendering trick. It basically samples a hemisphere around each point on the face, sees what proportion of that hemisphere is occluded by other geometry, and shades the pixel accordingly.

It’s got nothing to do with light at all. It is purely a rendering trick that tends to look nice because generally in real life surfaces that are close together (like small cracks) will be darker than surfaces that do not have anything in front of them, because of shadows, dirt, etc.

The AO process, though, approximates this result. It is not simulating light bouncing around or going through things. This is why AO still works when you do not have any lights in the scene, and it is why just switching on AO alone is a very bad way of “lighting” a scene.