Hey again, I need the help of someone with much more experience with rigging than what I currently possess to help re-rig the tail of my model. 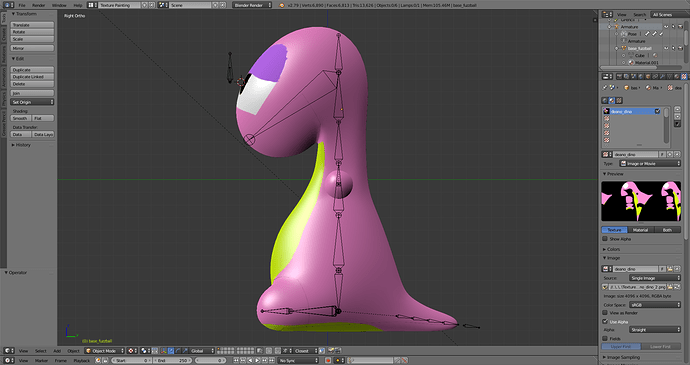 tail.png1920×1017 318 KB
Rigging a tail might not seem like a big deal, but trust me this is a much more complicated affair than what it initially seems. 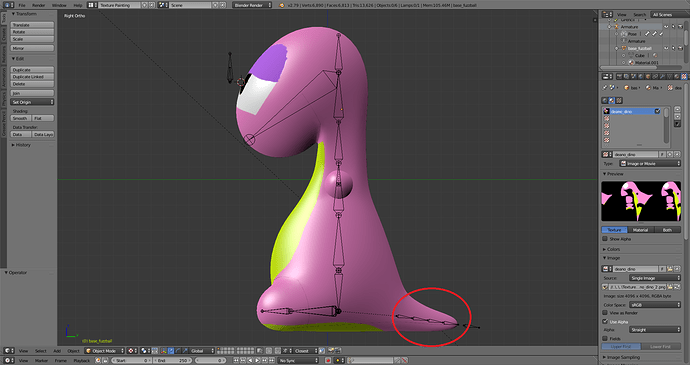 tail_11.png1920×1017 319 KB
So basically I’ve been trying to limit the amount of influence that the tail has on the back end of my model, as moving the tail causes surrounding area to move along with the tail when I want the movement to be limited to the tail itself. 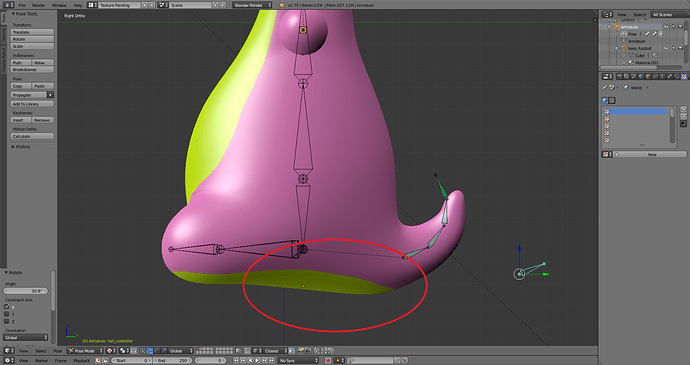 tail_3.png1920×1017 314 KB
The bottom of the model, in particular stands out due to the way that it bulges out downward in a really awful manner when the tail is moved upward.

At first, I thought the solution to this would be simple, just reduce the weight painting values to the area around the tail: 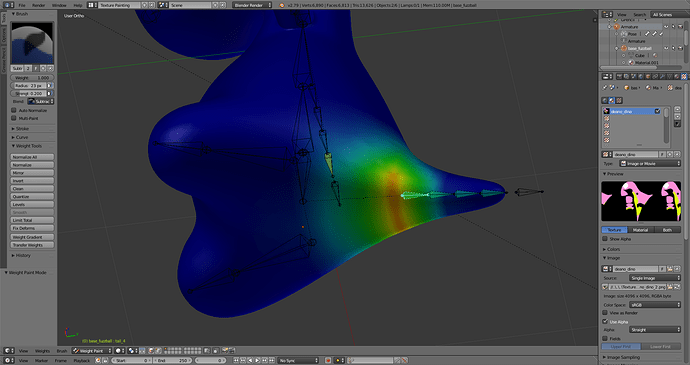 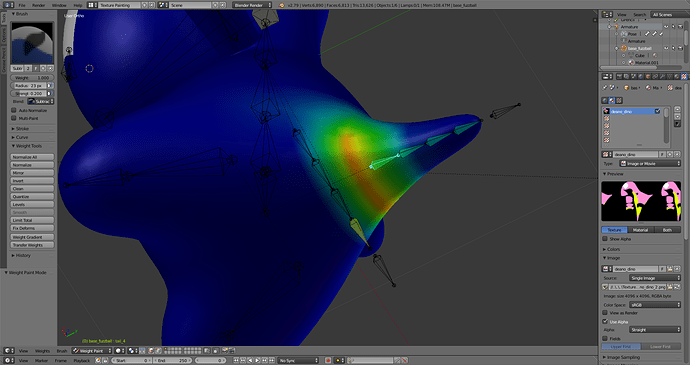 tail_8.png1920×1017 383 KB
By reducing the weight painting values of the bottom area of my model, it eliminated the unwanted bulge, so everything’s alright, right? 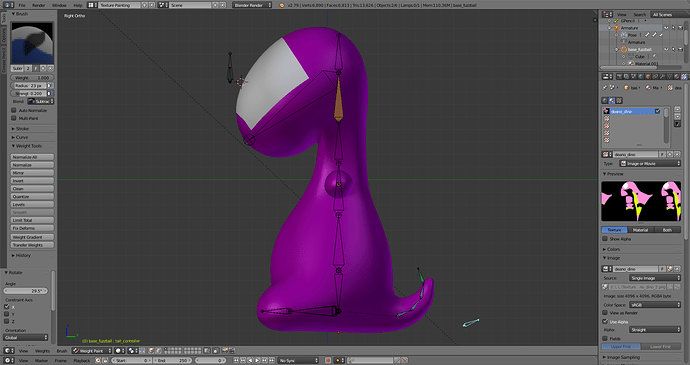 rigging_help.png1920×1017 316 KB
Unfortunately, no, because changing the weight paint values doesn’t just affect the bones in the tail itself, it also affects the way that the other nearby bones influence the way that the mesh bends. So when I rotate the thigh bone back along with the “leg” bone for a running or jumping pose, I end up with this result: 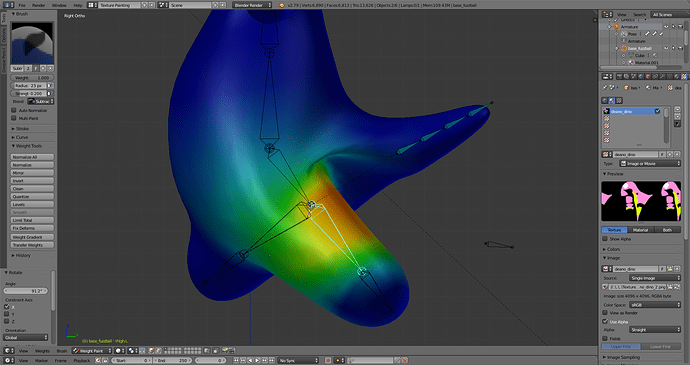 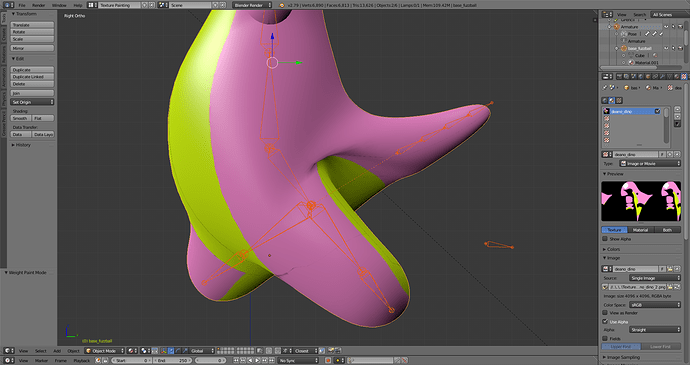 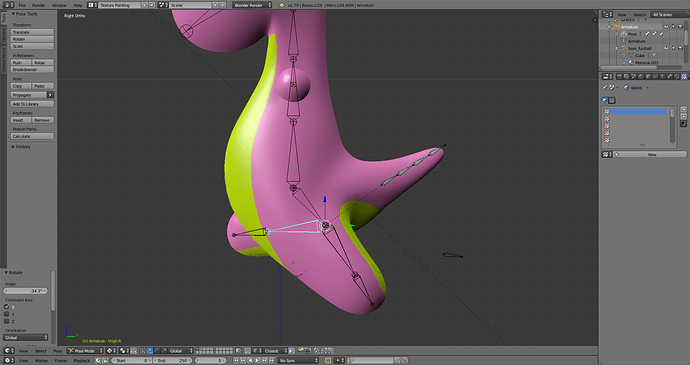 tail_5.png1920×1017 288 KB
Its not ideal, particularly when viewed from the side, the model does look a little bit awkward, but I’ve excepted the fact that the choices I’ve made regarding the anatomy of the character I’m designing will result in something that would always end up looking at least a little bit weird when I animate it for certain activities such as running. 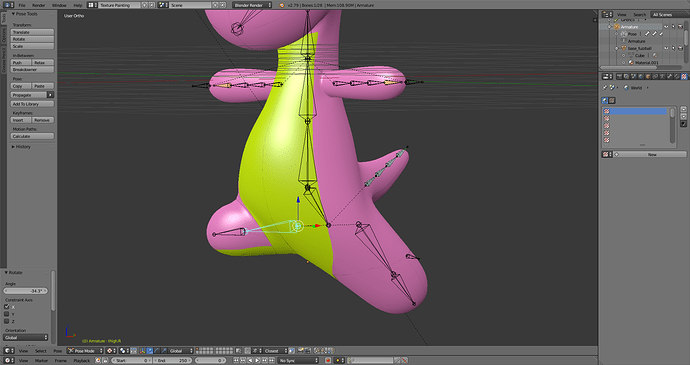 Trying to figure how to re-rig the tail while ensuring that everything else will still work in conjunction has been proven to be a complicated mess and a major headache. Unfortunately, I think this whole affair is probably beyond my experience in fixing, hence why I need the help of someone who much more well-versed into rigging.

I really hope that someone will be able help me sort this whole mess out, and as such would greatly appreciate any input in this manner.

As always, thanks in advance!

EDIT: Blend file link removed since the problem has now been resolved.

The problems you’re encoutering come from the vast gap between the root of the tail bone and the rest of the armature. Simply repositioning the existing tail bones like so will make things work much better: 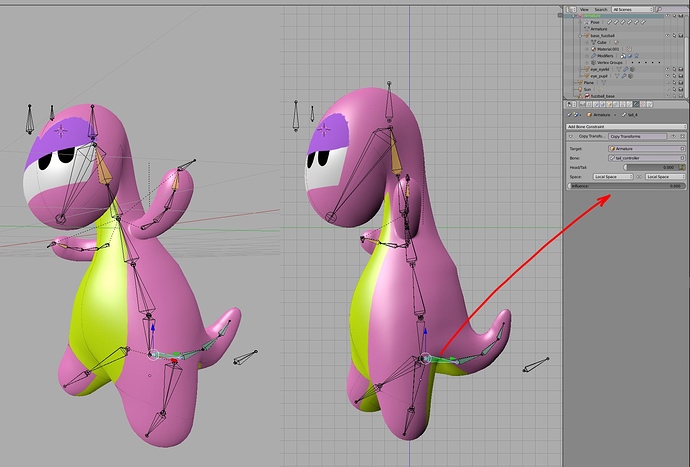 To move these bones you will need to delete all the vertex groups for the body mesh and then delete the armature from the body mesh modifyers. Then reposition the bones and simply reskin. I did no weightpainting.

I did need to change the influence value of the root tail bone as indicated with the arrow - otherwise the body distorts. You can always add more bones if you need tigher curves in the deformation.

Here’s my changed file. Be warned: becasue I do not know the ins-and-outs of this rig I may have altered something in trying to find a solution, so I recommend you either fully check my changes to ensure everything works, or ( ideally ) ammend your own file to understand the method.
rigging_help_CHANGED-BE-WARNED.blend (1.2 MB)

Sorry for the extremely belated response, I got caught up in more-or-less finishing rigging my model as well as some other stuff. Anyways, thanks for going to the effort of helping me out with my rigging trouble. 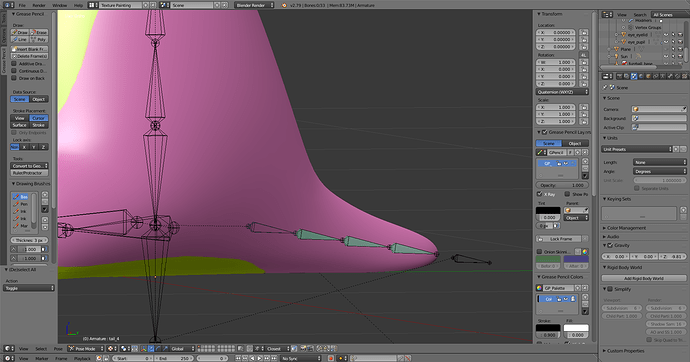 The solution I ultimately went with differs a bit from the solution you came up with, however your revised version helped me in figuring out the relationship between the mesh and bones. This in-turn allowed me come up with the above setup that works for my intentions.

So once again thanks for the help!