So, I’m quite new to this, and this is my first model. I rigged some bones and stuff and I could move them and pose them, but I went back and I added bones to my wings, and I can’t figure out how to connect vertex groups with bones… 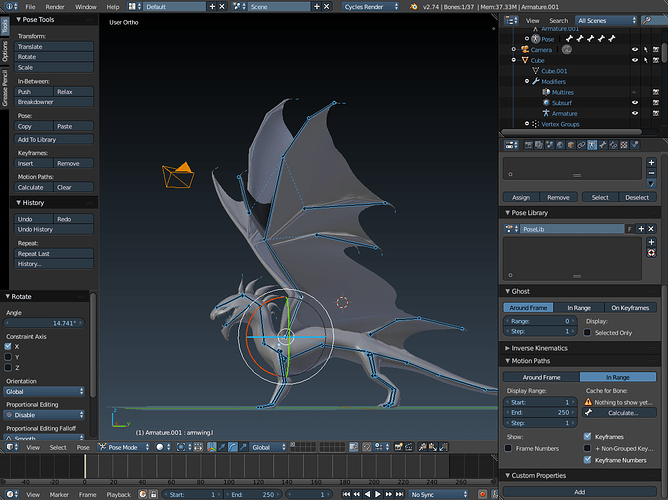 Bone naming conventions are left and right side bones need a .L and a .R suffix. Without the proper naming, you will not be able to use the x-mirror functions.

A dragon is a tough first project if you are new to rigging. I’d suggest getting Nathan Vegdahl’s tutorial, Humane Rigging as a first step in learning rigging in blender.

In edit mode, select the vertices you want to be affected by the bone (let’s say: Bone_Wing_One.L). For this hypothetical bone name, it would be the vertices on the left wing, near that bone (The left wing, because of the suffix .L at the end of the bone name.) Then, in the vertex group panel, create a new vertex group and name it “Bone_Wing_One.L”, capitalization and spelling etc. must be exactly the same as the bone name. Apply the selected vertexes to the vertex group, and now when you pose that bone, those vertices will move.

You can adjust the vertices in the group by applying or removing them. It is OK to overlap vertex groups (have the same vertex in two or more different groups) the vertex will move according to the positions of all the vertex groups it is part of. This lets you have smooth transitions between areas controlled by different bones.

I’d suggest for your first attempt at rigging a dragon wing, that you simplify the structure to maybe three bones per wing, starting at the dragon’s body, and ending at the tip of the wing. This won’t give you the control you need to furl and unfurl the wings, but it will let you flap them for flying poses.

I reparented the mesh, it works fine now.

Do you guys know how to work cloth or softbody simulations? I wanna apply one to the membrane of the wing.