Im working on my first interior scene. Im not bothered with the meshes etc as I think Im doing ok. The problem is when I come to do a test render. For some odd reason Im getting a “mottled” effect on the walls, ceiling and some of the furniture, (it makes me think Ive added in a normal or something). Now I have clearly done something somewhere but I cannot figure out what Ive done or how to correct it. Im using cycles and most of the materials are either just base colour or in some cases Ive added a texture or shader. The ceiling and walls for instance are just base colour at the moment but they seem to show the worst of the effect. The effect was not there in the beginning so Ive obviously changed something.
Not sure how to add an image in here to show the problem so I hope my description is ok. Can anyone help please?
Thanks
Antony

We really need to see something like a screen shot to help you out, even the blend file would be better …you might have to upload it somewhere else like Google Drive and give us a link…to up load a picture/screenshot click the arrow in the reply editor and you will get the dialogue to upload. 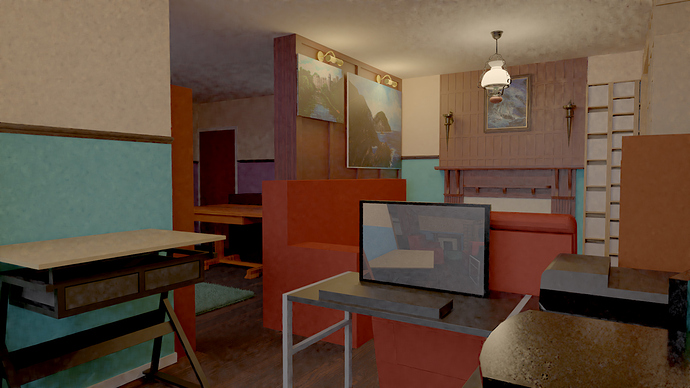 livingroom6.jpg1920×1080 485 KB
Sorry for the delay uploading this (been busy with the grandchildren). You can clearly see the mottling on the walls - ceiling and one or two of the items (like near the computer monitor in the forground).
I can post up the .blend file if necessary. Please be aware that this is very much a work in progress and has a long way to go yet.
zanzio (zanzio) October 12, 2019, 12:12pm #5

To me this does look like the blurring that the denoiser causes. You could try rendering the scene with more samples and using lower strength in the denoiser.

Try using the Intel denoiser instead - it doesn’t have any “controls” and you might have to experiment with what you’re using for input sockets. It is way better than the builtin one for low sample counts. If you loose details (denoisers can do that), you can afford rendering at twice the resolution and scale down to bring it back.

A thing to note about intels denoise - when it goes bad, it goes really bad

Thanks guys for the helpful responses. I found that increasing the samples helped a lot. I also found that increasing the radius of the light has helped. I originally had it set at 0.1 but have boosted it to 0.25. So Im guessing that lack of light is a big factor.
As for the back room, Ive yet to put any sort of lighting in there. At the moment it is lit purely by light coming in through a window behind the bookcases with the 2 paintings on them.
For my first attempt at this I decided to do something I’m familiar with, my own house. Still a lot to do yet. The DVDs in the units on the right still need to have any form of texture on them. There are also things above the drawing desk on the left plus more pictures to add on the wall which are currently out of view of the camera.
Ive also still to find some tutorials that will help me make the sofa and chair look like what they are supposed to be rather than placeholder blocks. But I wanted to see if it was looking anywhere near like a realistic scene. But I have a way to go yet on that score. Once I’m happy with this half the room I will make a more concerted effort on the back half of the room.
But anyway. Enough rambling. Thanks for the advise, its appreciated.

You are probably better off heeding the advice of using the Intel denoiser in Blender 2.81. It creates far smoother and less blotchy results.