Help with some ambient light please

Hi All,
I am trying to get some ambient light in this scene. There is a roof so cranking up my world is not getting me there. I have a couple of emitters but those do not do the trick for “Hangar lights” I was thinking of adding Point lights around, but thought to ask before going all elph and hanging lights when there may be a master light of sorts?
Thanks for the help in advance

Add several emitters with greater power than 1 in areas that need the light - you aren’t going to get much ambient without turning on Ambient Occlusion or adding enough lights.

So add just lights around the set? Occlusion on. Won’t that take the accent lights off? Thanks

Experiment with increasing the power of your lights that you do have - Also look into the black body node and temperature lighting, I think I saw a download on blendswap

Are the normals on those light panels facing the right way? That emitter material should be casting light into the scene.

Other than that, have a mix shader with it’s factor controlled by camera light path node. Then put separate emitters into the shader inputs. One will set the light value the light illuminates the scene with, and the other will set the intensity of the light the camera sees. (Cycles has some problem with aliasing if the virtual camera gets overexposed.) Then you can light the scene without blowing out the light. (Or alternately you can overdrive the light for the camera for compositing effects, but not bring up scene brightness too much.)

Also if you have any glass covering a light source, you’ll probably want to dive into how to use the lightpath node outputs. Cycles glass on its own is very light absorbent (even when “clear”) and needs to be countered by mixing it with transparent and maybe a few other tricks.

Paul Thanks for that info, good stuff. I will parse and look up. I will first check Normals direction. I have me cranked to 3k and not seeing any change… No Glass, But I have played with that and noticed it did not help the scene. Now I will check your info out.

Craig Black body Node and temperature lighting I will google or duck duck those. “DD” for short.

Paul I do not have camera light path node? I have Input>Cam Delta Please share a screen grab of your Node setup 2.71

Man I have been messing with lights for hours and not really getting to far. I watched videos where most use a plane and an emitter to get light in a scene. I am not getting much light for the size of my plane. Am I missing a switch or something?

I also lose my ‘fixtures’ when doing this. (see pics red outline) I have used some light boxes (yellow) in the doorways but for some reason my emitter is kinda flat. Even if cranking it up.
There are a few switches such as Global and partial for light rays I think it is. The pic shows a blue arrow?

I see the difference with Surface and Volume I am in cycles v2.71 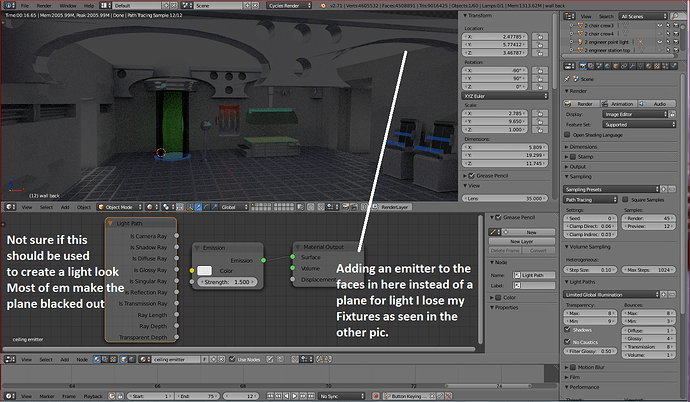 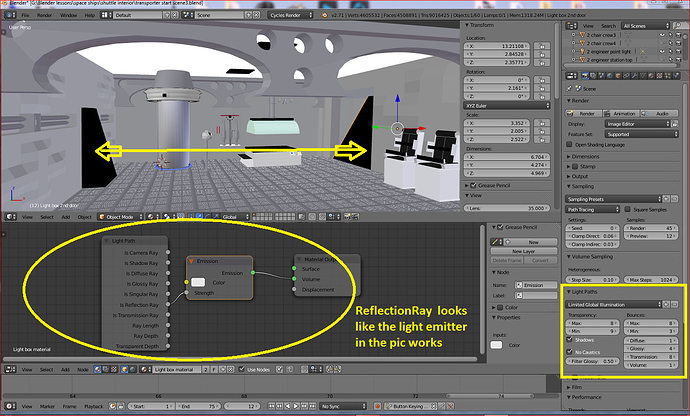 Continued two more pics to get look at what I am doing here: 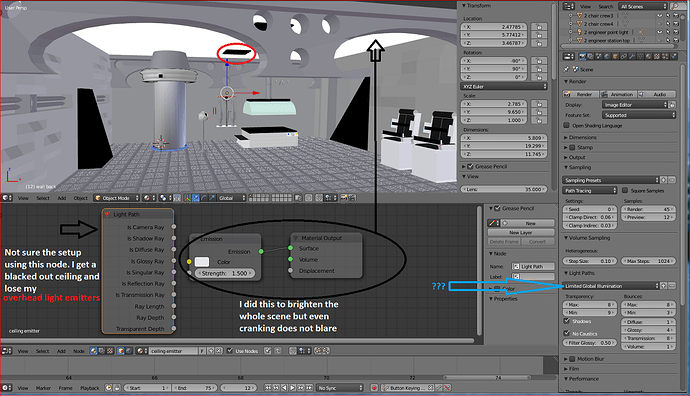 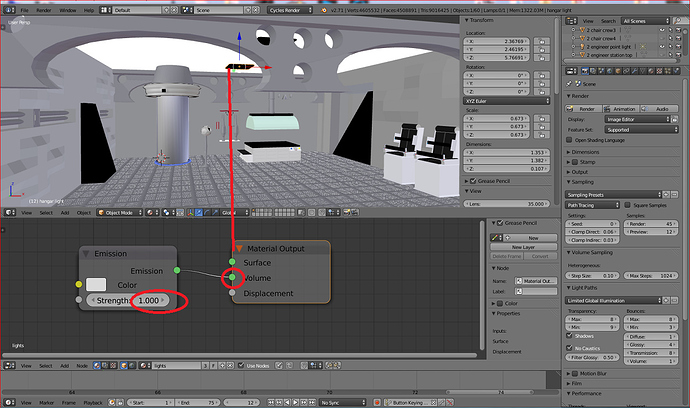 Paul I found your suggestions, but I do not know how to get my ceiling to match the walls now. I tried adding the same shaders before emissions but does not do anything? 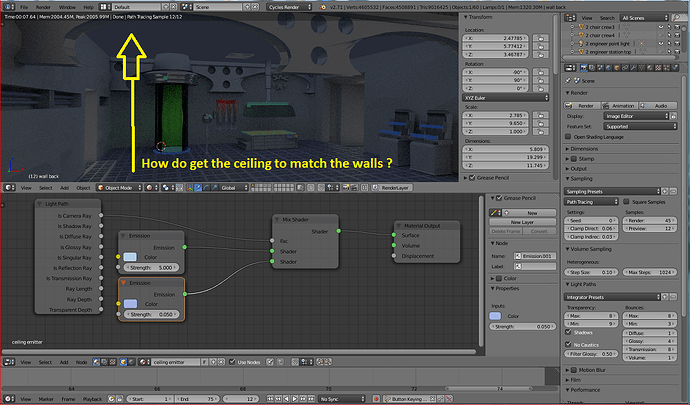 If you have stumbled across this thread and are having challenges as I have had. I have spent hours reading and searching for information on light paths and so forth. Watch this video. I downloaded it to revisit it.

(And you were one step away from it in the second to last post.)
Sorry I can’t always reply right away…

And this blend file.

No problem Paul on the get back. Screen grabs are always helpful when dredging thru nodes. IGE: Your light with glass covers is kinda vague. No problem though. This video
http://www.youtube.com/watch?v=MTFxyNzI5EE really helps understand how it works and why it works. So when looking at a set, you can easily decide that it is the shadow ray or camera ray that will define color amongst a minimal few others.

I am unclear if an Emitter is really a light source?
Or must I have a light to be the deciding factor of how the pixel is to be illuminated and or colored?

Emitter is a light source, that is how the emission shader is used

Well yes that is true Craig, but is it a light, as is a Add>light for use with Light path Node? Where an emitter has bounce… They seem pretty flat to me. Almost like they are a Bright Glossy. Do they even cast a shadow?

I have always thought they did, been using mesh emission for quite some time 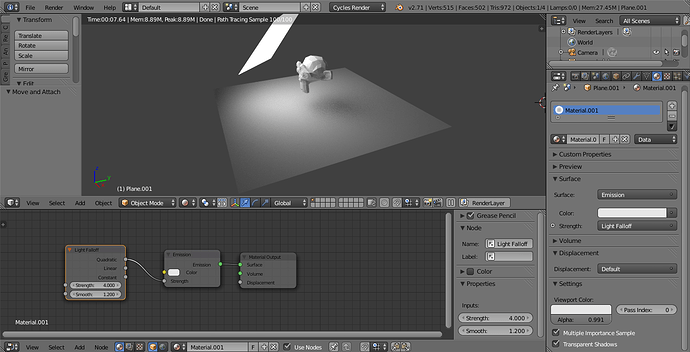 (And you were one step away from it in the second to last post.)
Sorry I can’t always reply right away…

And this blend file.

Well as far ‘Stuff’ goes; yes there is a lot of ‘stuff’ going on there as there are also 400 posts from your thread referral. I gotta tell you that your references are vague. Chalked full of information, but not on point. How do you expect one to gather how to fix the ceiling from that blend file you posted. (Which I downloaded and looked over) and equate it to my question above?

As far as a useful video for transparent material goes and a lot cleaner Node tree. (Remember the more nodes the longer the render)
Watch this one. https://www.youtube.com/results?search_query=Absorption+in+Cycles+
Stick with it past Beers Law or theory. It by far allows someone to understand “Glass stuff”.

Or the other link I posted to understand the Light Path Node. http://www.youtube.com/watch?v=MTFxyNzI5EE

To answer my own question after learning. I would state that to ‘fix’ my ceiling would come from manipulating the diffuse. However the whole ceiling is now an emitter and by Craigs post it is a Light in itself. SO will it have diffuse from the source to manipulate to desired color?
Thanks again for trying to help and I hope those videos help you too.

Ahh but Craig you adding a Light Falloff to an Emission. So is that a Light at that point? Due to the addition? I am real new to Blender and first time lighting a scene. So my questions are not Rhetorical.

Light falloff is just controlling the spread of emission… in Cycles, the first lights were mesh emitters only, not til afterward did support for the BI lamps come into play

OK Craig thanks for the insight. So on Post #10 here. I have a ceiling where I made the whole thing an emitter or a blend of two to light it better. Although I am kinda losing my fixture objects. (wondering if Layer weight and Fresnal will make them come out?) How or can I change the color of the ceiling to match my walls? To appear like a ceiling with the affect of white light in the room?

Remember the walls are made of diffuse and gloss to get that color. But it could be a different shade due to it’s angle.