it seems everybody goes for cars, when learning to model, or, as a second choice spaceships.
I decided to try a ship, more specific a little tug boat. Found some plans on the net which I use.
The basic hull shape is done and now I want to model some details.
At the bow there is this hole, which I tried to make by deleting a face and then extruding the edges once to the front and to the back. Those I scaled a bit to form this rim. Finally I made some closing faces. I set the ‘crease W’ value of the inner edges to 1.0 so there is no slope building up from the hull to the rim.
With subsurf on it looks almost right. But only almost. As you can see there are some nasty ‘shadows’ around the rim/hole.
Any ides on how to fix this? 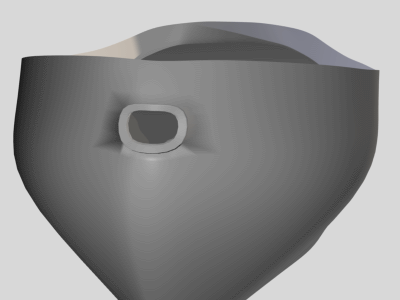 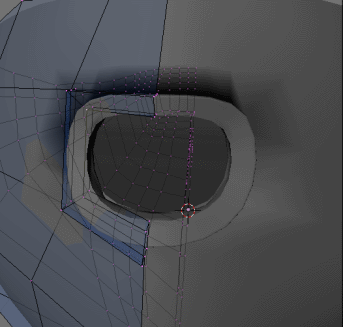 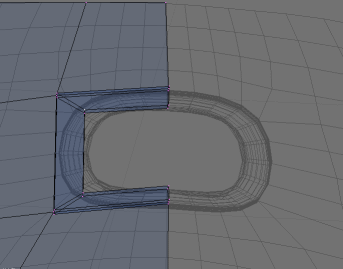 If you have extruded the same edges in the front and in the back direction, you have produced a so called nonmanifold mesh with more than 2 faces along one edge.
You should try to avoid this generally, because this is producing ugly results, especially when smoothed.
This kind of geometry is bad, because there is no way to say where the outside is.
Some normals are pointing allways in the wrong direction.

Just delete the unseen inside (backextruded) faces, then select all and press Ctrl+N to recalculate normals outside.

Thanks for your answer, Patel.
Sounds logical. But what am I gona do about the inside rim?
This part is not below the deck, so from a different perspective it could be seen.
The only thing that I can think of is making a ‘double hull’
I try to show in the attached picture.
But is this necessary? Or does anyone have another idea? 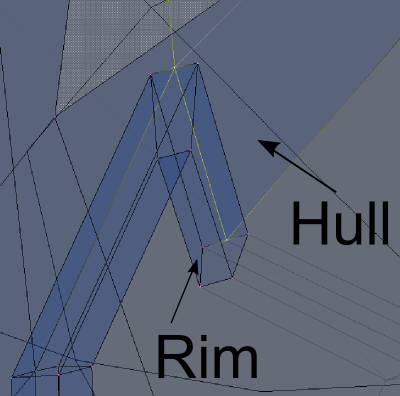 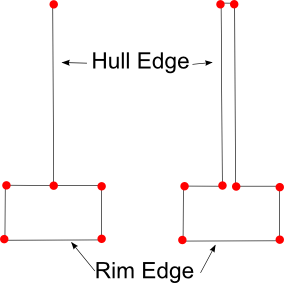 For correct shading, you should model it as shown in your example to the right. Otherwise, make them separate pieces.

Tahks for your answer, Cire.

Hm, I thougt so.
What are dissadvantages of both methods?
I think making a ‘double hull’ gives me alot of extra faces.
What is the disatvantage of making the rim a seperate piece?
I guess ist makes texturing more complex, anyting else?
I am trying to decide which way to go.
Thankfull for any hint

The first method is a case of non-manifold geometry, where an edge connects to three faces. It’s the cause of half of the problems in the support forums and should be avoided whenever possible. The smoothing will only work for one side and the edge between the hull and the thingamajig will be 100% sharp with no control over it.

Definitely go the second way or make the rim a seperate piece. You don’t care about the extra faces, because you already have subsurf and you’re not expecting to see this rendered 30 times per second. You’ll have to texture the inside too, but a boat having the same texture in and outside doesn’t make any sense anyway. If you add it as a seperate piece, you’ll have a sharp transition between the two objects, but since there isn’t supposed to be a smooth one, that’s no problem.

I would stick to the double hull, even if you decide to make the rim an extra piece
This way you have only Outside Faces to render, plus - you can give your hull some thickness, which will look better in some Views.

I was going for the double hull, as suggested.

I did the doubleing by duplicating and scaling the duplicat of the hull.
In case someone stumbles over this thred, there is also a script called ‘mesh_solidify’ which does the trick.
Found it in the Phyton Scripts Catalog, but it seems to be build in.