Hey there.
Let me show you some (sorta) recent work of mine. For now I have a half-fictional(ish) highrise-building and a fully fictional skyscraper finished, both of which are meant to be part of some crazy detailed skyline aerial-shot type scene eventually. Though it’s gonna quite sure take years, till I get there.

Anyway. Here’s an old Luxrender-testrendering (this was done before the cycles-era) of the aforementioned highrise-building: 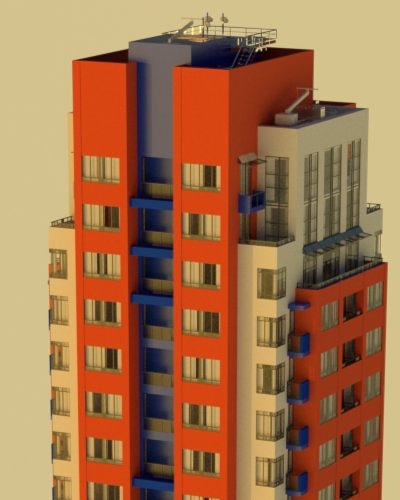 It has about 250k polys (in quads) and is completeley symmetrical, so this one render should give you enough of an impression.
Though I varied little bits & pieces here and there to my liking, it’s still rather closeley modeled after two real buildings somewhere in Tokyo, a picture of which can e.g. be found here.

Never mind the materials, I’m gonna redo them eventually, cause I plan to render the whole scene in cycles in the end (through render.st, probably, as this is gonna be way too hardcore to render at home).

This one was rendered in Cycles, btw.
Some statistics:

Here’s also a version on which I indicated a few things, I’d like to point out or guess might need for some explanation (see below the thumbnail):

The rest is rather self-explanatory, I suppose. But feel free to ask any questions, if not.

Here’s also still a little viewport-render-closeup of one such elevator shaft, as well as the cabin and counterweight (the thingie on the upper left side):

Well, that’s about it, for now. I might later add some more such viewport-render-closeups of interesting parts. Other than that I could only show you some older WIP-renders, from different perspectives, though stuff is obviously unfinished on those…

In any case, c&c always wellcome, that’s what we’re here 4, after all.
And there’s more to come, so stay tuned (though this may take a while, mind you, I started work on that skyscraper back in 2011)! 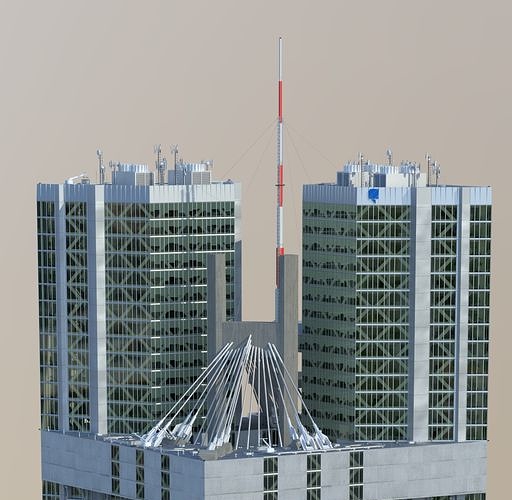 I like the unconventional architecture.
10 hours for a render? I’m guessing you didn’t use dupliverts/duplifaces?
There was an article by blender nation where they rendered “19 billion” vertices (yes billion) in about 40 minutes.
In reality, they had only 1 model copied thousands of times along the terrain. This allowed for some unique caching opportunities.
The repetition of the skyscraper makes this technique possible.
You should be able to reduce hours of time to mere minutes. This would allow you to make turntables or other animations.
If you want to add some texture variations, i would create a low poly version and composite it onto the higher quality.

This is great! The thing I want to see is all of these in some kind of city scape render. Also macktruck brings up a good point, you might find better render times as well as less lag in the actual viewport if you use dupliverts.

I had to take another look at the viewport rendered elevator shaft , it caught my eye.

The skyscrapers looks really detailed from what I can see.

You say it will take years to do the aerial shot? If your not already a good thing to do is reuse some of the detail objects and maybe changed them a little because if you think about it some buildings have the same satellite dish for example.

The metal for the rig on the elevator shaft feels fake compared to the rest of the image.
Try adding some textures or something
Great job though!