Please I need your honest critique! 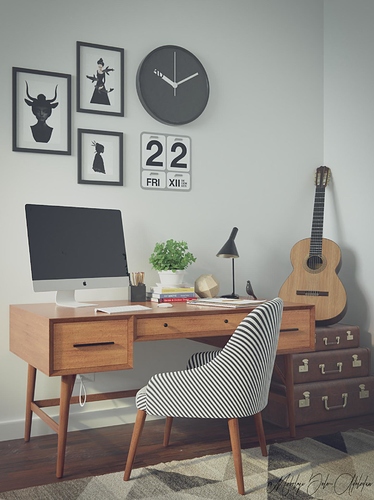 Looks a bit dull. You should boost the contrast a bit and add a minimal texture to the wall otherwise, its fine…

I agree with SK0441, it looks a bit faded though I am new to blender so cannot suggest any methods to work on that. As for composition I absolutely love the little folds in the rug under the chair, those little touches are what make these scenes for me. The suitcases in the back stand out to me as being cloned. Upon closer inspection I see they are different slightly but they don’t seem different enough so at first look like they have been merely duplicated and scaled (to me at least). I would maybe rotate them a bit and angle the handles at a different resting point, maybe open some of the locks on the top case. The same goes for the books on the desk, even though people would tend to stack things evenly they always get knocked and moved slightly out of alignment.

The only other thing that I notice is the reflections on the monitor, or lack of. Reflections on those surfaces are a great opportunity to give a scene life by using them to help build an image of what the rest of the room looks like. Or I would turn it a tiny bit so the plant isn’t reflected in the screen as currently I feel the little bit of plant that is reflected only makes me notice that there aren’t any other reflections in the monitor which is a bit odd and chips away at the realism of the scene. Also are there no wires for the monitor? Is see the plug socket but nothing behind the screen.

Just my thoughts. Really nice scene and I love the clock, the black numbers on black background really pull me into the screen wanting to inspect it closer and the bird on the desk is beautiful. The shape doesn’t initially read for me but I can’t tell what it is and makes me focus on that area, very natural imo.

Thanks for your honest opinion, i will make changes to make it better

Thanks for the in-depth critic I will try to improve the scene based on your observation.

Hey i have 3 little hints for you:

After all the critiques: That is a really awesome theme really well made.