I’ve been lurking here for a while now which has been both informative and inspirational. It’s taken me some time to understand the modeling paradigm of blender, being used to ProEngineer which is quite different altogether, and mainly played around with importing ProE models via wavefront format into Blender and fixing them (ProE tends to screw up meshes in some tangents with rounded edges, requiring some tedious re-facing in order to avoid strange artifacts). I have also done some tutorials such as the soda can and ginger bread man ones.

Only recently have I tried modelling something from scratch in Blender, my first attempt cannot be shown as it involves some IP issues with work. This is my second attempt spured on by FritzX efforts in modelling the same item which he referes to as Greek/Spartan Helmet. I am not attempting to rain on his parade but am genuinely interested in warfare in the ancient Greek/Roman world, which should keep me motivated.

I am about 80-90% finished modelling up the hlemet and about to start experimenting with materials and textures. I do realise I could have used fewer vertices in construction, but that is part of the learning process, working out what you can get away with will come with experience, this is only my second attempt modeling for myself.

I’d like to say that I’d model up a Hoplite in full array, but most likely try something else before returning to this theme.

Any feedback would be welcome. 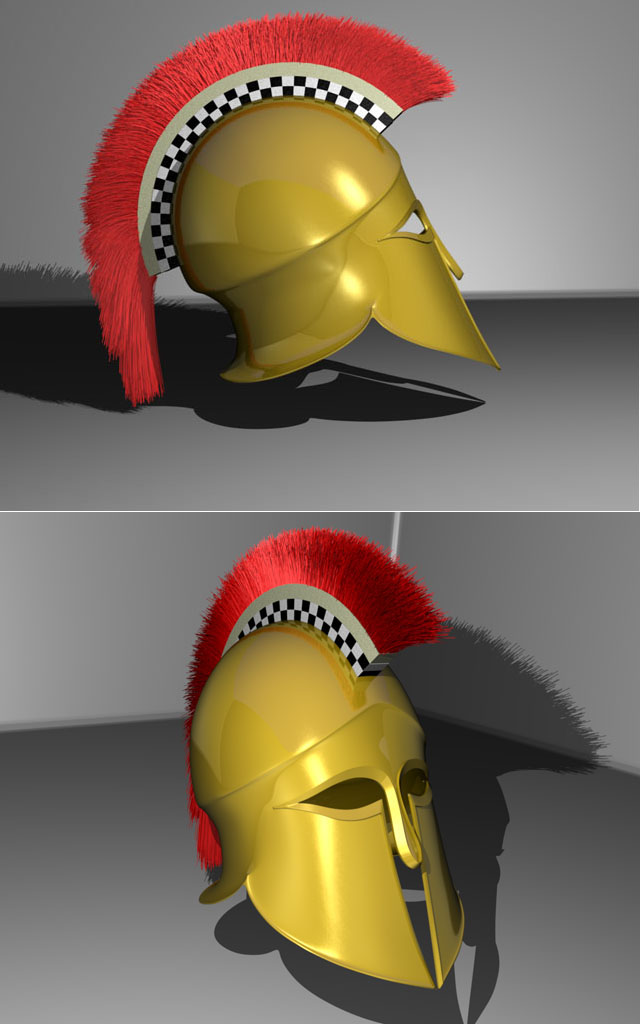 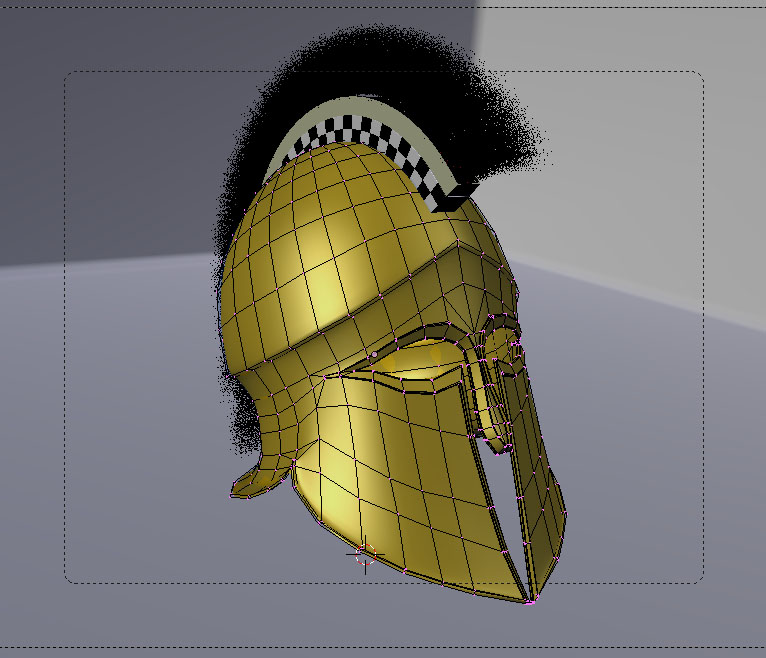 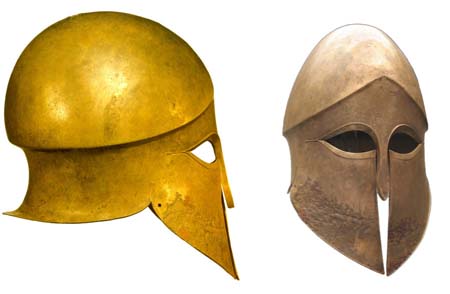 Nice…
Great use of the particals.now add some scratches and dents just to give it a photorealistic look to it

The model is really nice! How did you made it? Some textures are welcome though. And that checked pattern you have on the top of your helmet doesn’t fit too well IMO. But that’s a matter of taste!

The model is really nice! How did you made it? Some textures are welcome though. And that checked pattern you have on the top of your helmet doesn’t fit too well IMO. But that’s a matter of taste!

Like some of the guys around here use blueprints to make cars. I started up with a side view and front view (which I drew up myself as best I could using some of the photos in my original post). I started with a quarter circle for “bowl” of the helmet, moved points to form that ridge appropriately, then started to extrude down. I hope some images here will get the idea across. As for the rim that was a pain and was done manually, extruding edges then repositioning each vertex to the right area using the front, side and top views to make a rough guess.

As for the textures, I am yet to really start working on that, but that checkered pattern is historically accurate, maybee not in terms of color but certainly in design. 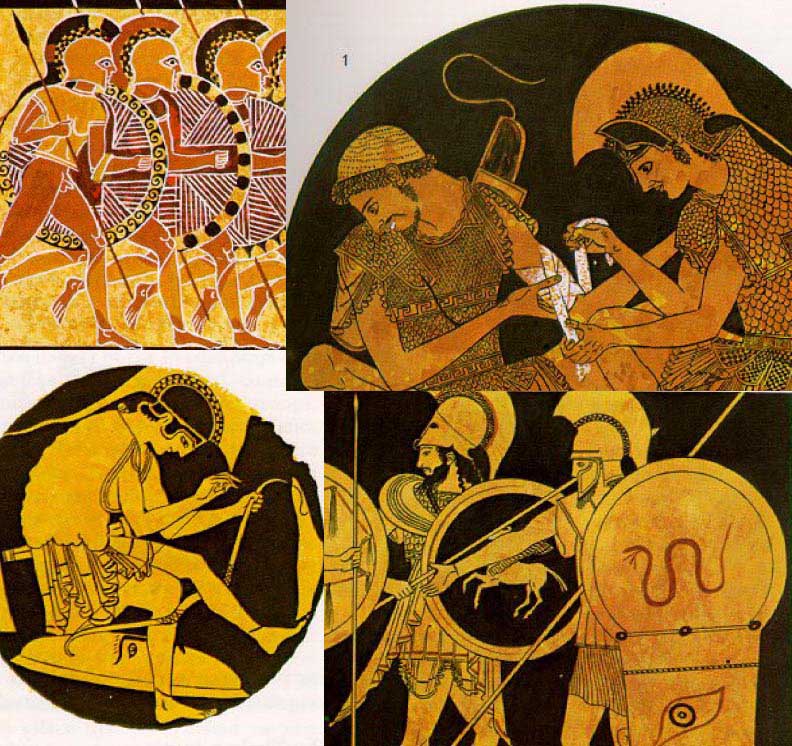 I don’t think complimentary colors were used JDA, rather loud striking colors to get that ‘don’t screw with me or I’ll ram this spear up your ass’ sort of vibe.

I’ve decided to at least try to model a fully equiped Hoplite circa the Persian Wars. I am aiming for historical accuracy. I’ve since experimented with materials, trying to get the hang of things, please feel free to comment and give pointers as materials and textures are a world onto itself, trying in particular to nail that bronze material.

Also I’ve modelled up the weapons employed as well as playing around with HDRI.

I am currently working on the shield which I hope to post sometime this week. 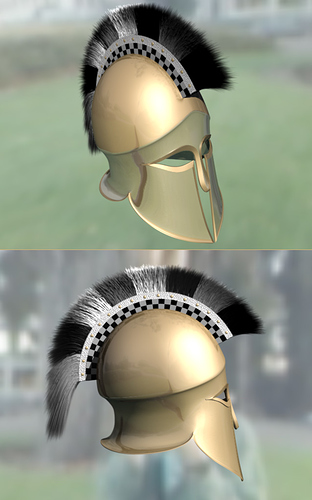 The Shield took longer to do partly because I modeled up the detail rather than use bump maps and are trying to get to grips with the particle system to produce a decent tassle.

I’ve noticed that ‘hair’ is not supported in Yafray which kinda sux, and that rendering times start to become quite long. Might try a different tack later, like painted planes.

Still trying to get to grips with the material system. I’m trying to create a ‘buffing’ look to the bronze rather than dents and scratches if you know what I mean.

Very soon I’ll starting with modeling the man, then body armour, clothing and greaves will then follow. 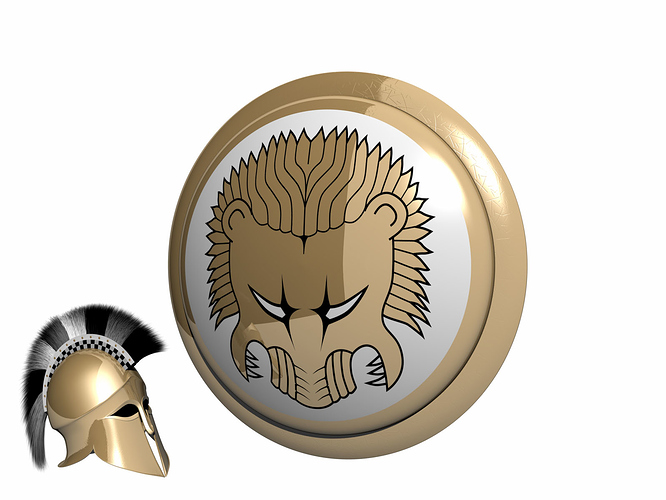 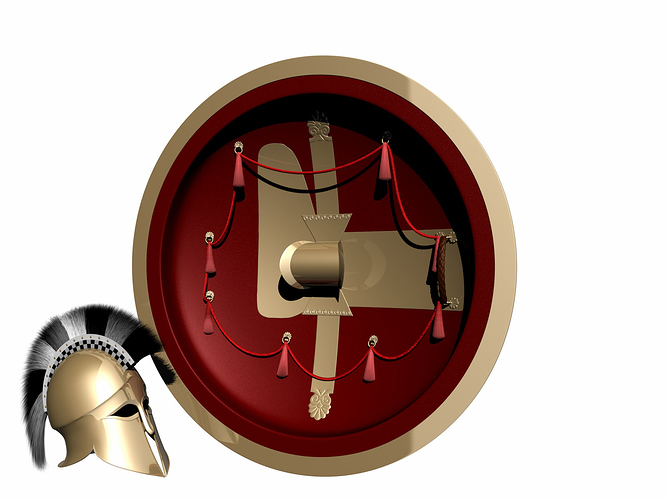 Looks great - excellent attention to detail. That you modelled all that on the shield is faintly disturbing…

Personally I prefer this smooth and shiny look to a rough, corroded one, but I’d add a few dents and whatnot just for realism.
I’d love to see a complete phalanx of these guys. I imagine that would be hellishly memory-intensive though. Have you ever played Rome : Total War ?

The back of that shield looks disturbingly good, an eye for detail.
I’m watching this.
Make sure you use a lot of reference, but I can see you’re already on that (looking at that picture with the backside of the shield).
Cause I wanna see this complete and correct!
P

Looks great - excellent attention to detail. That you modelled all that on the shield is faintly disturbing…

Personally I prefer this smooth and shiny look to a rough, corroded one, but I’d add a few dents and whatnot just for realism.
I’d love to see a complete phalanx of these guys. I imagine that would be hellishly memory-intensive though. Have you ever played Rome : Total War ?

I have certainly played Rome: Total War and it’s expansion, it was a no brainer purchase considering my interest in the ancient world, though generally play with mods.

As for creating an entire phallanx, I’d really like to depict a battle scene. I’ll see how the modeling pogresses before deciding to up the ante, most likely try a few other things first before returning to this theme - variety is the spice of life.

really good. historical accuracy is almost on point as far as I can tell. A few scratches and bumps should leave it still relatively new-looking and a lot more photo-realistic. for body armour which type will you be modelling? there where many types, e.g. Muscle cuirass, Bell cuirass, Linothorax and scale Linothorax ( don’t know the official name for the last one but I’m pretty sure that’s it).