How are HUION Drawing Tablets?

I dont make a lot from 3D but i need to learn sculpting. A tab without screen is a bad idea.

HUION seems to be about what i can afford because WACOM is too expensive for now.

A tab without screen is a bad idea.

According to who?
Don’t attach yourself to the idea that a drawing tablet monitor is essential unless you’ve personally tried one and have a lot of experience with a normal drawing tablet. A simple desktop drawing tablet is not only perfectly fine, but in a lot of ways actually superior to a Cintiq (or cheaper) for 3d work.

let me add though- I had more issues with HUION’s software than XP PEN’s. HUION was slightly easier to configure in some ways, but it also was more glitchy. XP PEN’s is lacking some features but I’ve never had any glitches with it.

I’d take @init_pixel more seriously. I started as a pen and paper artist, and one would assume that a tablet with a display would be my natural progression. However, I use a “dumb” Ugee tablet (a Huion by another name) and it is much more intuitive in my opinion, and honestly, cheap as chips.

I have a Huion Kanvas 22 plus from 2020, and it works great. I’ve heard about some driver issues, as @josephhansen stated, but I haven’t experienced them personally.

Now, I wouldn’t discard the cheaper screenless drawing tablets without testing them before.They have better ergonomics, better lattency, are easier to fit in any desk set up and have simpler cable management, and of course the economic difference is huge. The only benefits of the grafic monitor are that is a bit more precise, and that you don’t have to disociate your hand from your eyes (I know people who are totally unable to do such thing). So maybe you could save some money now, go for a cheaper screenless tablet and upgrade to a drawing monitor in the future only if you really need to.

If i go screenless, which of these should i buy? https://www.amazon.in/s?k=wacom+drawing+tablet&sprefix=wacom+dr%2Caps%2C271&ref=nb_sb_ss_ts-doa-p_1_8

None of them… why are you searching for Wacom if you want to buy a HUION? If you want a HUION, get a 610 Pro:

im not looking for a huion. i dont know the difference to any.

Huion screen ones are much cheaper than wacom.

i thought wacom was the best. so if i go screenless, i thought id stick to wacom

Wacom is the most expensive, if you’re looking for screenless, there’s no reason to get a Wacom. Wacom makes the best/most expensive screened drawing tablets, but you can get a screenless one that works perfectly for half the price from a different maker. Again, the Huion 610 Pro is only 50 dollars, and they have cheaper ones even than that. It’s the same thing, just a different brand 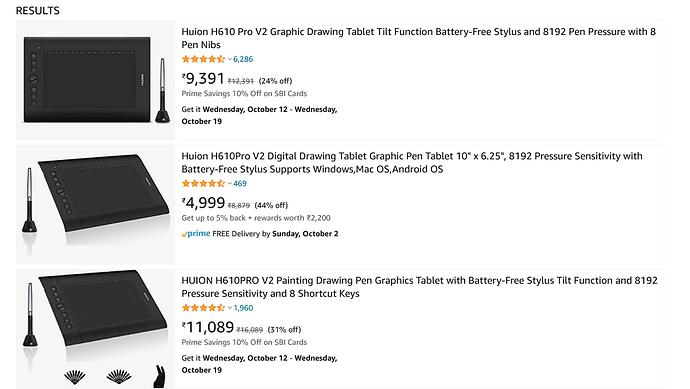 there’s 3 of the same thing at 3 prices. i dont know if they are the exact same thing or different.

They’re all the same, just from different sellers. I’d get the cheapest possible

Just my two cents - I used a basic graphics tablet for years before I made the jump to a Cintiq 16 - but I bought it used. Huion and XP Pen seem to work great. The reason I decided to get a Cintiq was purely based on comments from artists who talked about a bit less latency with the Wacoms. For me it was the right decision. The difference between hand-eye-coordination is night and date for me - personally. But I wouldn’t have known that haven’t I worked with normal graphic tablets before that.

I think if you’re starting out, just get the best mix of affordable and quality. But regarding latency issues - I don’t really have those (yet), regarding the folks that say that a “normal tablet” is better for 3D.

There were problems in ZBrush, could not work on this tablet. Worked fine in Photoshop, Substance Painter and other programs. For professional 3D work, I prefer Wacom Intous M.

I have a Huion Kamvas Pro16 and use it on Linux. Needed to compile my own open source drivers and fiddle around with some button configuration through command line tools and scripting, but now it’s working even under my favorite OS. Had an Intuos4 before and I personally like working with a screen much more. As someone mentioned, if you’re on a budget, look for some used ones. You can save a lot of money.

can you suggest something smaller? it feels way to big for my table

Sure. If you don’t want a 16-inch tablet, I’d recommend this (XP PEN Deco Mini):

XP-Pen Deco mini7w Wireless is one of the most pocket-friendly drawing tablets in the market. It is specially made for beginners and has everything you need to get started .

Just make sure you have enough desk space. I use my (screenless) wacom intuos more because it’s always connected and I have to move stuff around to use the Huion.

this. anything made by wacom will be good. Rest are possibly ok but you will need to dig some info

i settled on this because of size and Huion seems to have better support in india than XP Pen. 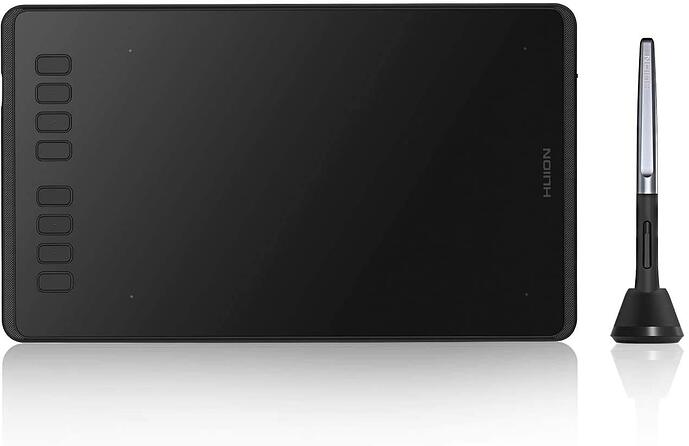