How can i made the ground look wet in this scene?

What is the Cycles node set-up for that?

My node set-up for the ground material: 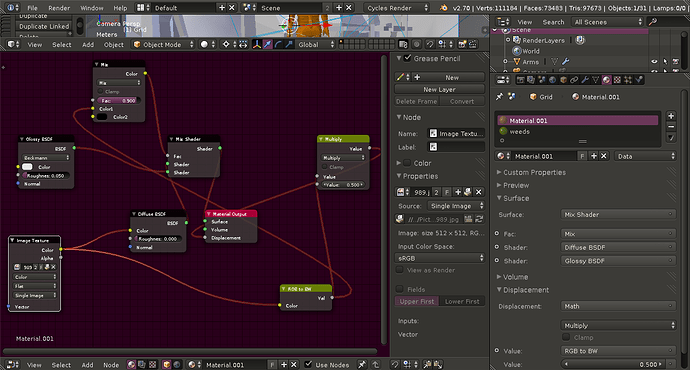 In this scene, it has rained.

You´ll probably need to introduce a wet layer on top of your normal/dry shader.
You can do that by mixing your dry shader with a glossy or glass shader using fresnel.
Cycles standard fresnel node isn´t all that usefull imo opinion, that´s why I´d go with Layer Weight node and plug the Facing output into the color input of a RGB Curves node. The RGB Curves output goes into the Fac of the Mix Shader. With the Curve you can now control the reflectance correlating to the angle of incidence.

Here´s an image. It´s not a wet shader it only describes how to blend two shaders the way I descirbed. 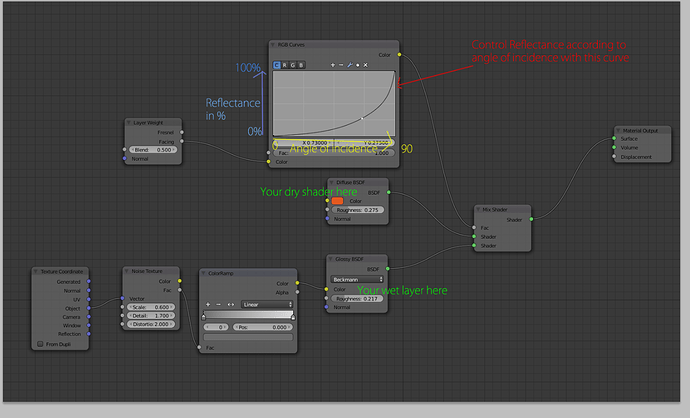 The fresnel above is a start. It’s been a while since I did wet, so this is from memory. If you want your original surface to be partly visible in the wet, you need to provide a modified original and modulate it accordingly. Typically, without going into too much detail, you want the wet part of the original to be darker (how much depends on porosity of material) and with reduced saturation. If the wet substance have a significant (and only then) thickness to it, you should also find a way to find its depth and darken it by that depth.

Unable to look at your material right now, but here is a paper describing things to consider:

Version : 1.3 – Living blog – First version was 19 March 2013 This is the third post of a series about simulating rain and its effect on the world in game. As it is a pretty big post, I split it in…

This is meant for a pure flat plane indicating a partially wet surface. For a more geometric approach, you may want to check out this tutorial:
http://www.blenderguru.com/videos/the-secrets-of-realistic-texturing/

I will try that when I hit home.