How can I unroll cylinder?

I need to make animation in which cylinder is unrolled like in picture below.

What is the best way to do that?

Animate a plane changing into a cylinder and then reverse it
Add a plane and subdivide appropriately.
Add a Simple Deform modifier
Set to Bend
Set the factor to pi*2
Press the Apply as Shapekey button
In the object data panel under Shapekeys you can then keyframe animate the shapekey slider

That’s it! Thank you

It depends how accurate you want the effect to look. Shapekeys tend to take a shortcut between the start and end positions so that the plane will appear to get shorter during the transformation. It might be easier and more accurate just to keyframe the Deform Factor directly. 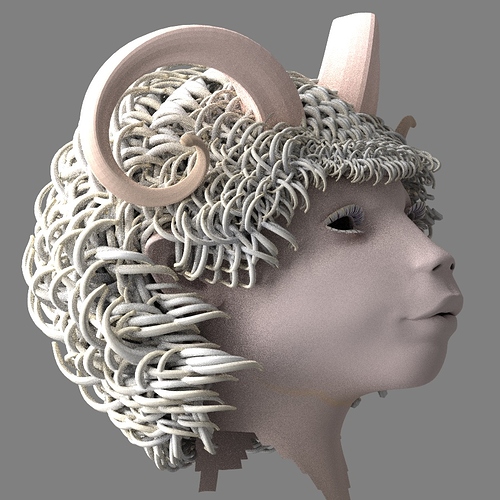 But then I run into the following problem:

I’m using successive versions of a curly curve to get the curl-up effect.
(I want to go from straight to curly, as for a lock of hair.)

The idea is to use relative shapekeys cumulatively,
and control the whole progression with a single Empty
that I can rotate continuously from small to large angles;
the Empty’s rotation value feeds into smart enough PyDrivers,
that I stick into the “Value” fields of the successive shape keys.
It works.

The problem is, getting those shapekey shapes from “Apply as Shape Key”
in the curve modifier.
For 30º and 60º, I can start from the same basis and everything is mellow;
but when I get to 90º, I find that the curve modifier introduces an unwanted twist
that I can avoid by getting into the base shape in Edit mode, and counter-twisting that.
The problem is that, now, I have one shapekey sequence that goes:
Basis, 30º, 60º

and another that goes
Twisted_basis, 90º

I know it can be done, because I actually did it, recently!

Alas, a long night was transitioning to dawn, and I was so exhausted
that I can’t remember what it was, exactly, that accomplished the trick!

Can any of you gurus relate to this?