How can I use a curve to create an animated bird's flight path in the GE?

I like the ability to create a curve and have an object follow it as a path. I can tweak the path along xy and z, and my little plane (which would be a bird or a bug in the GE) flys around in a nice clean curve. But as you know, path animation doesn’t work in the GE, as there’s no F-Curves. How can I bake that path to a set of F-Curves I can use in the GE? I Know VERY little about animation, and can’t seem to find an answer. Or I don’t know the words to use to look. Thanks.

You can make the flight into an action and then call that from the BGE.

Did you know you can have a curve in the graph editor controlling speed by setting keys in the Offset slider. They appear in the GE as Offset Factor keys. Then you could manipulate the curve itself on top of that. Also when I use path constraints I always like to have two or 3 root nodes for the constrained object, especially if it is a camera for even greater control and fine tuning. Once you have it as you like it then you could just bake it out if you want to clear the constraints. The baked animation would typically be on a key each frame though so a bit harder to edit at that stage.

Thanks. I’d like to turn the followed path animation into an action. Sure. But how? Toka - I’m afraid I don’t follow anything you mean. I’m a modeler / texturer. Trying to learn a bit about animation, but…offset sliders…? Root nodes? Bake? Sure, I know what you mean…but where?

I’ve even tried advancing each frame and adding a manual keyframe to the object - a plane following a path. Nope. It won’t insert keyframes. Dunno why.

I’m writing from a tablet so can’t make screen grabs right now. But I hopefully have given enough guidance that a quick internet search ( try even an image search ) can easily point out where to find these features. A quick search will usually take you to an appropriate place like Blender wiki. At least it normally does for me.
A root node is the top node in an animation rig or hierarchy. In Blender you would most commonly use an empty object for this. If you are using armitures in Blender then it would be the bone all other bones are connected to. The very top bone in the chain. Most simply it’s the one that you move when you want to move everything together. The top master parent of everything in your rig or linked objects. Multiple root objects means having one master parent object, then another parent object under that and then possibly a third. These are like handles to move your bird around. The master parent or root node you would constrain to the path. Then you could use the others as extra pitch and rotation or even movement controls.

How can i edit a follow path constraint with the graph editor?

I’m so sorry - I just don’t get it. There is no Animation baking popup. Sometimes I think I’m just too old. I’m 43…this must all seem so obvious. Nothing I see generates ANY curve for the object. Only the curve. I just want to use a path to animate an object, and then use that animation in the GE. Am I the first to do this?

Bake arbitrary transformation (parent/constraint/track/path-based) into key framed transformationInputs to this procedure are an object, a sample frame rate and a frame range.Triggered by pressing Ctrl-I in a 3D view with an object selected, appearing as “All animation to key frames” on the Animation Baking popup.

Ok…Thanks all the same, but I’m just doing it manually. Just seemed like a simple thing…no.

You are by far not the only old timer around here. 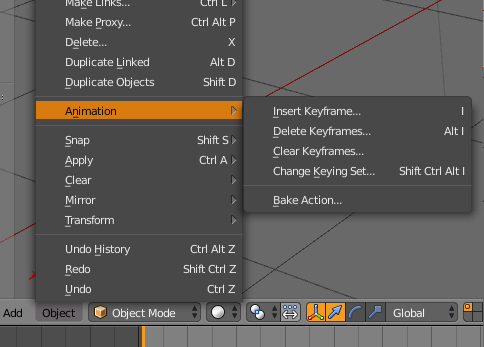 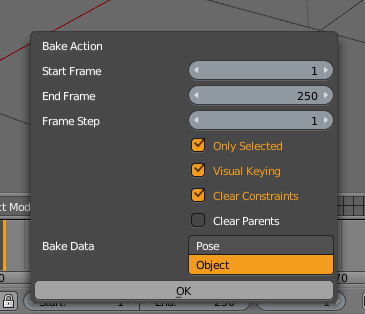 Thanks. Sorry for the delayed response - I do appreciate your effort. I’ve been working.