How did you find my first project?

It’s my first work and I am forwarding to take some advice, can you please say what I did true and what’s wrong so I can improve myself? Thanks a lot! 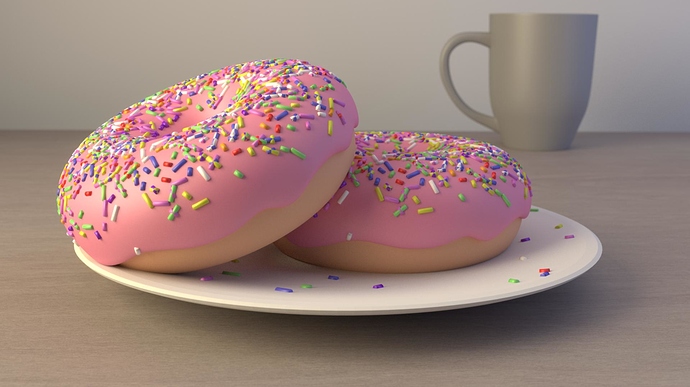 personally. lights looks unbalanced, is only a light?
The cup is bad illuminated, background looks too dark and sad, in contrast with the colorful donnuts
The table is too flat

Everything else however needs improvement. The rest of the scene are colored with bland depressing grays which does not match with the doughnuts overall cheery and festive appearance. Something more light and cheerful like light blue or soft yellow would work much better.

The two tone light (orange-blue) doesn’t work well with the subject. The standard studio lighting also isn’t helping. The setup is just too artificial looking. Try to emulate natural lighting. Something like an open window in an overcast day. A natural white and very soft light.

The composition of two doughnuts is not that appealing. Two doughnuts just doesn’t look complete. A single doughnut or three (odd numbers) would work much better than two. If you really want two, then it is better to emphasize one over the other. Maybe put the other doughnut in another plate and push it into the background. You could also try shooting (with the camera) from above. Many food looks nice when seen from the top because most has decorations that looks best from the top like the icing and sprinkles of these doughnuts.

You need more loops/geometry for your plate. You can clearly see the polygons, unless you like the low-poly look it has.

The cup on the background doesn’t go well with the doughnuts. Its shape and color just clash with it.

That is all for now. Hope you succeed!

Thanks for all your comments! I will try to improve myself with your valuable reviews