How do I convert Cycles hair into 3d mesh?

As the title states, how do I convert cycles-engine’s hair particle system into a 3d mesh?
I just love Cycles render engine for the materials and everything it has about it, including the actual 3d hair with possibilites to change root/tip size etc. I don’t happen to have Nvidia-gpu, so I cannot render much on it, so that’s why I use the Blender internal one. Either way, I’ve been searching the net for some kind of way of turning cycles-volumetric 3d hair into an actual mesh for use in internal render and game engine. Any tips / ideas are warmly welcome!
Thanks in advance! C:

Sorry, gonna bumb this. This is pretty asked question and after searching for answer for a few days I still cannot find an answer. If this one will, I hope it helps others as well.

You really can’t. The hair outputs a set of individual paths, not a mesh or a volume. You can hit the convert button on the hair/particle modifier to bake the hair to a set of edges, but I don’t know of a way to output a solid mesh based on that. It’s theoretically doable, but I don’t think Blender supports it (it’s vaguely like a particle mesher, which blender also lacks).

You might be able to model a separate hair mesh over the particles, then bake the hair result to it. No idea if that actually works well or not, just an idea I had.

Can you try to do that? I’m not that experienced… D:

Here is a possibility, step2 should say, in the modifeirs click ‘apply’ on the hair system. Then hides the scalp, then alt-c ‘curve from mesh’ 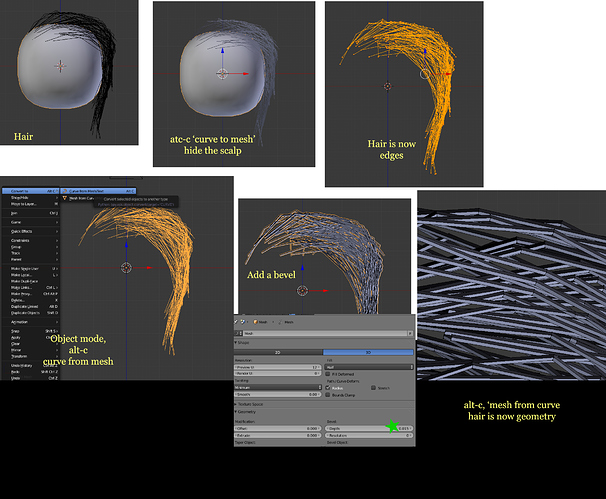 Thanks. Tried this, hasn’t worked for me, the hair just disappears. Any other ideas?
Really appreciate your effort!

Thanks, it seems like everything works more or less like wanted. You’re amazing!
Have a fabulous day!

You could always try using the skin modifier. I think Photox’s method makes a bit more sence though.