How do I custom rotate the origin/pivot point? 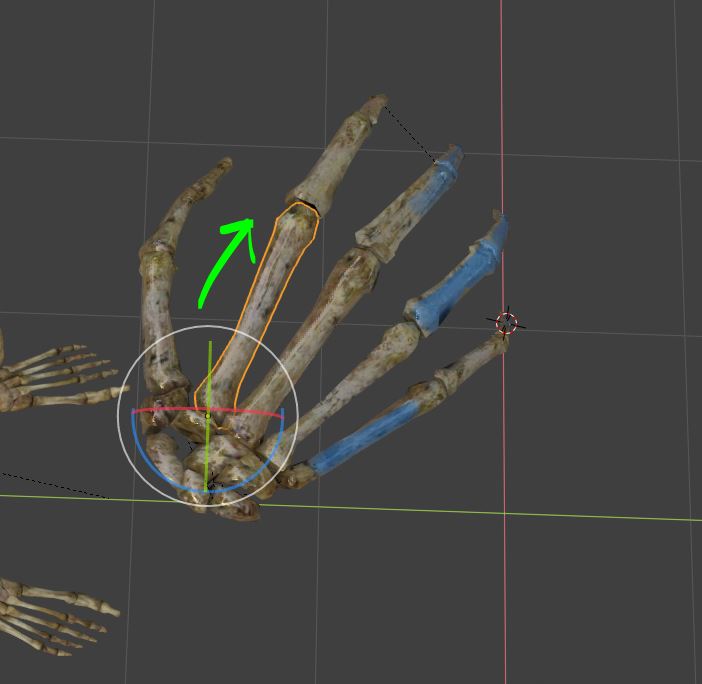 I’m hoping I’m wrong on this, but something tells me this feature doesn’t exist in Blender. I’m just trying to parent this skeleton to be able to give it a basic pose functionality. I’ve parented all the bones in the hand and set each of their origins, but the origins are all rotated in the wrong direction.

In the image I’ve shown where the axis is pointing and then in the green arrow, shown where I want it to point.

** This is not a local/global transform issue. The object itself has no transformation as it was imported, so it’s not as though it was created at a clean right angle and was then rotated. Each bone was separated from a collapsed OBJ.

Luckily, this is easy. Use the Transform Options popover to affect only the origin: 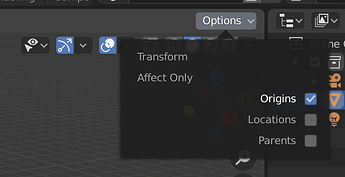 You can also choose to keep children unaffected here too.

ah, sorry for being dumb but I can’t for the life of me find that option. Don’t supposed you could elaborate. Thanks.

The option is found in the “Options” button dropdown menu or type N to open the Sidebar and select the Tool tab.

And don’t forget to change the transformation axis to Local to see the effect, of course.

Um… isn’t this option only aviable in the 2.81 Alpha currently?

seems possible, if you look at my screen cap, none of those options are present.

In case you don’t know - you can download the 2.81 Alpha from https://builder.blender.org/download/ - it should be fairly stable by now.

ah ok, good to know (and that it’s not totally unstable 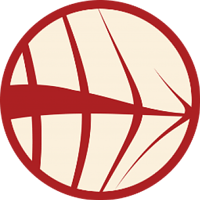 Yes of course, here you have a video that shows how it works: And here you have the link to download it: https://www.Bone-Studio.com/blenderaddons/BS_Modify_Pivot_2_8.zip Cheers!

it brings in similar functionality to the one present in 3dsmax called “Affect Pivot Only”
With this you can change the location and the orientation of an object pivot with having to deal with modifiers and without touching the geometry at all.

And here you have the link to download it:

actually the one in 2.81 works ok. Only issue is that as you’re rotating the pivot, the gizmo disappears and is replaced by this hard to see one.

That’s another thing that should be high priority.