How do I prevent bbone flipping?

So bbones will flip when twisted 180 degrees on the y axis, as seen in the following animation:

I don’t believe this is a bug, so is there any way to prevent this? I tried switching the rotation mode for both the bbone and its handle bones to use xyz rather than quaternion but that does not help. I also tried separating the handle bones from the bbone and using them as custom handles, but that also does not work. Lastly I tried to drive the bbone roll-in and roll-out by the y rotation of the custom handles (by first negating the initial rotation then adding back the rotation), and while this does seem to improve the situation (the bbone would instead flip at 540 degrees when specifically rotating the on the y axis), for reasons I do not understand the bbone would still flip with minimal rotation when a handle is rotated arbitrarily by rolling .

So does anyone have any ideas?

the 360 degrees range seems to be a common limitation for all the properties
holding rotation value. it makes sense from a transformation point of view: the
object rotated to 360 degrees became at same position/orientation it was initially.
this limitation will affect handle bones and the bendy-bone spin as result.

the max you can do with a single bendy-bone is 720 degrees twist utilizing two properties
instead of single one: in roll (0 to -360) + out roll (0 to 360). making the whole bone
spin (to compensate bone head rotation) will result following 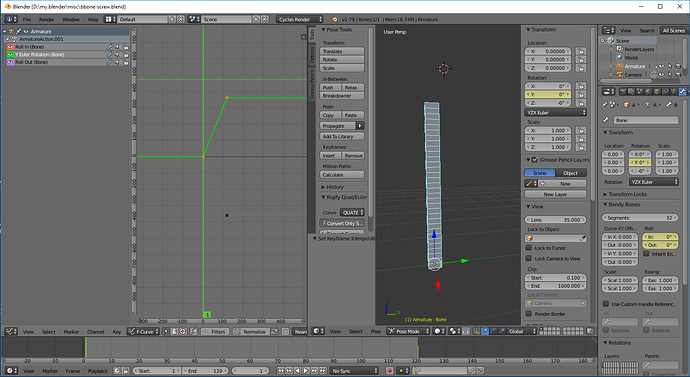 the alternative solution could be using a chain of bones where each child inherits parent’s
rotation plus rotates more via copy-rotation constraint.

Hi, thanks for responding. Unfortunately I cannot use the method you suggested because the rig I’ve made requires that it has one single bbone for deformation with two handles at either end for the in and out rotations on all axis (not just the y axis). As far as I know, multiple bones in a chain cannot bend in the same manner as one single bbone, as the rotations inherited from the handles will only effect the bone they attached to rather than propagate through them.