How do I propose an addition to the Extra Objects add-on?

If there are a lot of people who want to include this in the add-on or justified reasons, then a saucer with a teacup can be included in the add-on . . .

Doesn’t look like there’s a lot of interest in getting this added, so I’ll go for “justified reasons”: the bicubic patch data for the teacup/saucer model was just as available in 2012 as the data for the teaspoon – whatever reasons there were for not including both of them (keeping the .py size down? the model’s rotation? the missing bottoms?) are far less important today then they were in 2012. The teacup/saucer model (either from the data Juhana Kouhia provided in 1991 or Okidoki rotation fix in this topic) should be added to Blender’s add_mesh_teapot.py .

. . . The truth is probably worth a little tweak and close the mesh.

Doing this to the bicubic patch data is well beyond my current skills – if it’s “a little tweak” to you then I’ve no objection, but I’d hate to have this held up over that.

. . . The truth is probably worth a little tweak and close the mesh.

Doing this to the bicubic patch data is well beyond my current skills – if it’s “a little tweak” to you then I’ve no objection, but I’d hate to have this held up over that.

In retrospect, yeah, I have an objection: If somebody wants to use any of this teaset in Blender, they’re likely doing it for one of three reasons: 1) the Teapot (as currently implemented) is a standard 3D test object, so for that purpose would be pretty much used as-is. 2) They want the historic 3D objects, as closely authentic as feasible in Blender. Or 3) they want whatever art they’re working on to reference these historic models, and starting with the models themselves lends an extra feeling of authenticity (my personal fave).

Reason #1 doesn’t involve the teacup, so focusing on 2 & 3: If someone wants the historic 3D objects then they don’t want bottoms on the cup/saucer – including them just make annoyances that have to be deleted. And those using this in art where of course there should be bottoms – are trigon’n’poled bottoms (which is what can be added to bicubic patches) what they’re looking for? Not likely, they almost certainly want all-quad extruded/scaled-in/grid-filled bottoms, trigon’n’poled bottoms would be annoyances that have to be deleted.

TLDR: Given the likely potential uses of the cup/saucer, adding bottoms to the version produced by this add-on seems counter-productive. 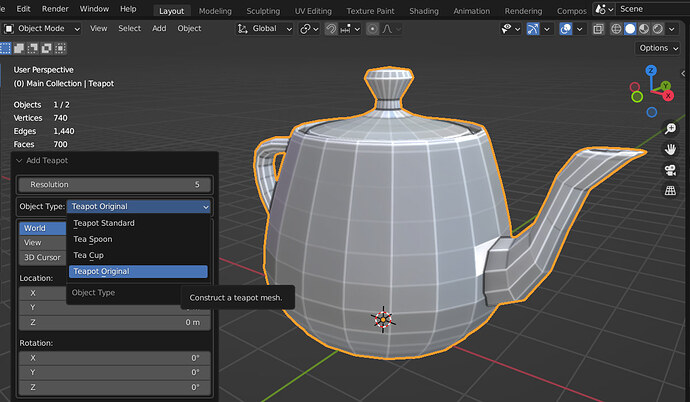 This version includes Okidoki’s rotation-fix of the teacup/saucer and the “original” (full z-scale, no bottom, no inner rim) teapotCGAnobottomtall.bpt from Holmes3D, converted via Okidoki’s above script. It’s been a couple weeks since I asked on Stack Exchange about the teaset’s milk jug, no joy. Unless there are any objections I’d say this is the version to go forward with:

@cwolf3d , how do we track progress on this?

We don’t know why D’Agostino chose to include that but not the teacup . . .

So I asked him (posted with permission): 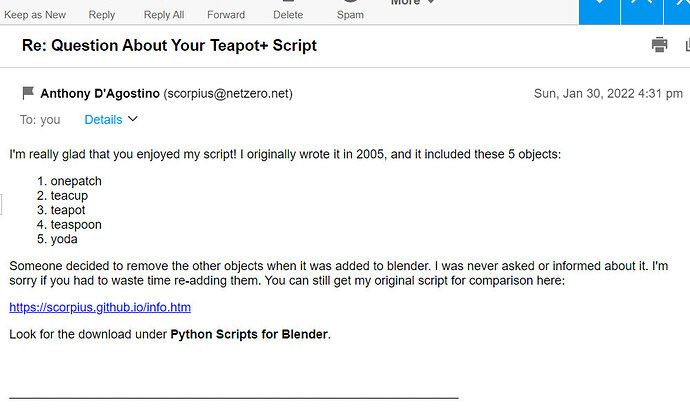 Curiouser and curiouser! Understandable that the Yoda was removed, of course. But the teacup clearly should’ve been kept, its exclusion was in error.