How do I put each texture on top of each other with those on top casting shadows?

I am texturing a planet. I used 3 spheres for the Atmosphere, Clouds and the Crust. How can I just use one sphere and just put the textures (atmosphere, clouds) on top of the crust texture with the the clouds texture casting shadows?

This is what I’m talking about: 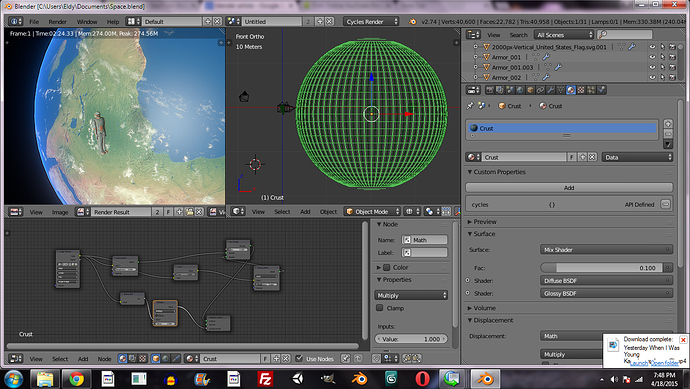 I don’t think you can - you need geometry for the shadows to land on, and if you only have one sphere, you don’t have that. The light needs to go through some geometry (cloud sphere, for example), and onto another (planet sphere).

you could duplicate the texture for the clouds (or whatever is casting the shadow) in photoshop or gimp, make it black and apply a little blur to it, then layer the cloud on top. You may need to displace it on the UV map slightly. This also wouldn’t quite match your light source, so depending on the shot it might look rubbish.

You might be able to use a bumpmap to raise the clouds up a little, if the bump edge is super sharp you might get the effect of shadows being cast at the edges. But it would probably look terrible.

Is there a reason you can’t use more than one sphere? That would look a lot better, and if there’s some reason you need it to be one object, there might be a better workaround.

I will try anopheles’ method.

The reason I’m needing one sphere is because I try to keep the polycount as low as possible because it this will be a large scene.

You could also just do a full bake of everything onto the crust sphere, which will accurately capture the shadows of the clouds, then just layer the cloud texture over that new baked image in Photoshop or using nodes? Should work, and give the most technically accurate results for your scene. Won’t work if the primary light source has to move during the shot, but it’s a space scene and I’m assuming the sun will stay put.

If you’re concerned about polycount though, why not just use a much lower poly sphere for the cloud layer? It doesn’t need to be as visibly round as the crust sphere, after all.