How is Blender constituted?

I’m really new to the open source thing generally. Of course I knew open source for long but only as in “it’s free, which is good”, but I never really thought about how those projects are organized.

As I’m having looks at blender for a couple of weeks (as a hobbyist) I get more and more interested in how it is organized, but cant seem to fully get a grasp on it. The things I have trouble grasping with are: People with the authority to decide things are necessary (or else nothing gets done), but who decides who’s deciding when the project belongs to everybody/nobody?

What I get is: Blender is for everybody and theoretically by everybody. Everyone can contribute. Yet there needs to be still someone who can decide what is added or not to blender, right? So it’s not clouded with double features and things that contradict themselves, or now with a new UI-autority, what is fitting in the UI, the workflow, etc. So that the content fits in a context.
What I dont get: Who decides who those people with authority are? In a company that would be a CEO for example, yet Ton is not the CEO, there is no CEO, even more Ton has absolutely no power, as he said in a talk on the bcon.
Ton, in fact, is only managing the foundation, whose unchangable goals make it just forward money to devs right? Or does the foundation have a say in what gets funded and what not? Because if so, Ton wouldn’t be so powerless at all.

Is it like this?: The blender foundation follows it’s own agenda concerning improving blender, but because it’s open, everyone who else is able to get funding or develop something is invited to add it into blender (or improve existing features). But then you still would need someone to decide to add that external thing or not. Who is this and on whose authority does he decide?

What I also have thought about (this was also a question in one of the talks with ton), what happens when Ton isnt around anymore (for whatever reason). Because (as he said), his role aside from the legal role of blenderfoundation-chairman, is to bring the right people together, and give them a little push in the right direction or something ;). But I fear (I maybe overreacting) that if his beneficial role in this whole project is not institutionalized properly, it could go bad. Because of the thoughts above I have a little bit the impression that he is still deciding and everyone is looking up to him as the benevolent dad or something.
It makes the impression that everything that is happening is loosely based on unwitten terms and vibes, which is working great, as long as you have someone who keeps it together, which is Ton :).

I do not mean to come across disrespectfull at all if it seems like it. But I really have no clue how all this works ;), and of course I’m greatful for everything that is done!

To underline my thoughts I made a constitution-like chart based on my understanding of this all (therefore the big “?”). 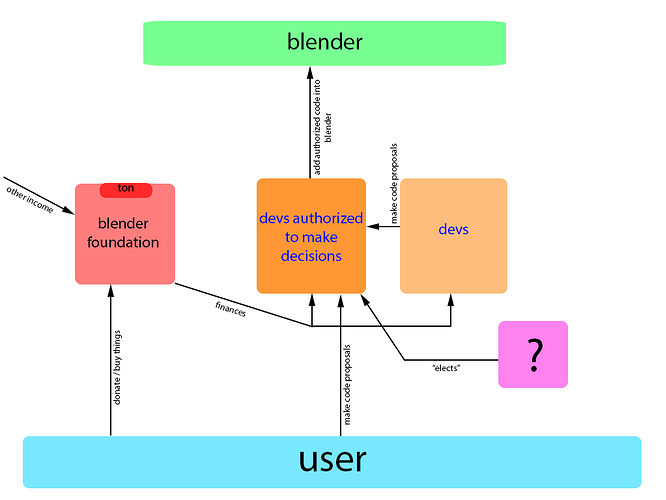 it is simple. Every project have it creator and that creator decide’s about other stuff. That is why if blender would like to change license it would be impossible. because Every person with have written even one line to this program would have to accept the new license. Now. Find and contact all those guys.

Blender is open source but that does not mean anyone can decide what to change to the official build which is hosted on blender.org.

Anyone can take Blender source as-is, make a new version and put whatever on earth they want in it, this is open source.

“Blender” is not a public free for-all, like imagine a blackboard with freely accessible chalk in a public place would be. But more like a public display board behind a glass sheet - you can put things there if it’s approved but you can also freely read and learn from what is behind the glass already whilst at the same time vandals are disabled from being able to destroy it. Blender source code is what is in the display board. “Blender” is the display board itself.

If you wanted to, you can make an exact copy of that display board and what is in it as you have all the information to do so, you would then be the controller of what additionally goes into your display board, you would also have control of who else is in control.
If Blender were closed source you could not do that, basically the display would not be covered in glass but instead a plate of stainless steel and welded shut.

I don’t know anything really about who decides who makes decisions but I think it would be somewhat organic (I guess like any organization), someone starts a project and chooses people to make decisions, those decision makers are allowed to also give that power to new decision makers who have proven their trustworthiness, somewhat akin to making a copy of the key to the lock on the display board.

From an external viewpoint I would summarise it as an “organized blob”. As opposed to “chaos” or a “single-file follow-the-leader” situation.

Well, Blender is opensource, and you can create your own version which means that you can build your own copy and make your own modifications.

Thing is, Blender is also really complicate, and there’s always bugs to fix and documentation to make. The Blender Foundation takes that responsibility, making sure that bugs are fixed, and that Blender’s code doesn’t become irrelevant. They also organise other things like marketing and networking.

So, no, Ton is not a CEO, but more a project leader. The official opensource name is ‘Maintainer’, because he takes the responsibility of making sure Blender’s code is maintained.

based on your infos and the links I updated the chart, I hope I get it now ;): 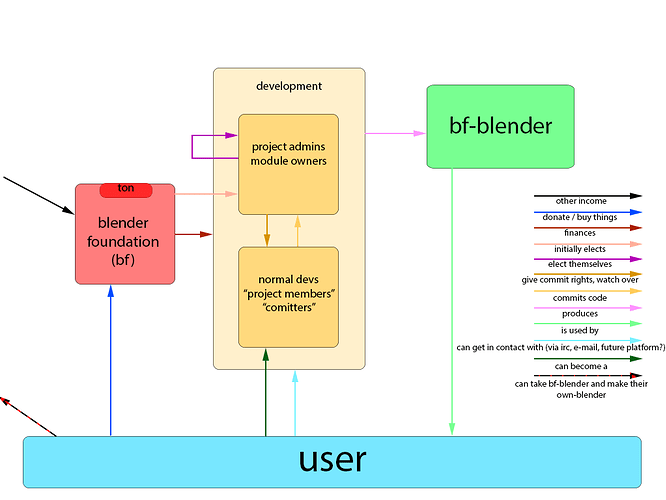 If you are interested in a longer exposition of how it all works, take a look at The Cathedral and the Bazaar by Eric Steven Raymond. While it is not specifically about Blender, it does explain both the philosophy and the dynamics that underlay many complex open source projects, Blender included.

Coding decisions mostly get decided during the weekly developer meeting on the IRC. What (and when) work get merged, what needs to be worked on, what people are currently working on & etc…

Generally speaking, it’s the core devs and/or module owners who decide if someone’s project gets included in blender. For smaller changes it’s mostly up to the module owners to review the code and give a thumbs up/down – unless it’s something pretty trivial then someone with commit access can just do the change without too much fuss…though it’s still a good idea to poke one of the module owners as a courtesy.