First off, I’m pretty much an intermediate at modeling. I’m not exactly a stark noob anymore, but I still have plenty of dumb questions to ask.

I’m designing a player character robot for a little Unity project. Something we’re all doing both for the fun of it, and to get some experience under our belts. I started out with a high poly concept, and I’ve done a decent job of trimming him down to a decently low poly equivalent while still keeping about the same silhouette.

I say decently, because he’s still pretty high poly. About 31,000 tris/16,000 verts to be exact, and I’ve still got a bit more to add. Here’s a shot of him if you want to take a look. There’s plenty I could still trim off. I’ve got quite a few constraint loops in there to demushify my meshsmoothing I could remove, and use edge splits in its place. Plus some of it could be normalmapped, I’m sure (and that’ll be the topic of another dumb questions thread).

Now I’ve looked up polycounts for main characters in modern games, and while on I’m on the high end, I’m still in the average. Still, 31,000 tris is a lot. I’d like to get him down to less, but since he’ll be the one main moving character, and there won’t be tons of other models onscreen in the game (lots of detailed environments, though), I think I might be able to eek by as is. But I’d like to have some second, third, and fourth opinions and suggestions on it.

What do you all think? Way too much, or a little high, but otherwise alright?

Seriously, this is a game related question. While there may be people who model who also do games, you’ll find more of the eyeballs you need over in the games subforum.

Do you get to use subsurf in Unity? If you do, then you can probably cut your poly count down to around 4 or 5 hundred (rough guess – your image didn’t load completely, so all I saw was the hemisphere and part of a cylinder on top.

Are you, by any chance, using Blender’s default numbers when adding mesh primitives?

Gaw? Is Dropbox acting up again? It gets a lot more complicated the farther down you go.

I thought about asking this question on the game engine page, but wasn’t sure it was appropriate, since this isn’t Blender specific. I split my differences and decided to post it here.

And no, Unity, nor any other game engine, supports subsurfs. Only basic tris for them.

Lastly, sometimes I’d use Blender’s default 32-sided cylinders. But if I needed less, I could pare it down pretty easily with a bit of tweaking and edge dissolves.

You, know, you can attach screenshots to your post, so we wouldn’t have to go off site to see your mesh. Scroll down until you find “manage attachments”.

And, as far as I can tell, the Game Engine forums aren’t limited to Blender’s Game Engine. Especially now, with all the free engines available.

31,000 is ok, but probably more than you want. My safe zone is 10,000, but if that’s lacking in detail, I’ll jump up to 20,000, but I’d rarely ever go above that. If you want to have a lot more complex environments, I would suggest lowering it down significantly, particularly for lower end machines. Just remember that it is always good practice to remove any details you don’t need, even if they barely affect the performance.

I’d probably feel a lot better about this if I could get it down to 15,000 tris. Especially since, as I said above, I’ve got more detail to throw in before I can say I’m totally done with it.

If there’s one thing I absolutely suck at, it’s knowing what bakes down to a normalmap, and still look pretty sharp compared to the original. For organic models, I could probably do alright. But mechanical ones like this one leave me scratching my head. Like my gears, caps, and doodads? I could probably chop those down to flat 12 sided cylinders and bake the fine detail into it. That’d probably cut off about 4k tris right there. But how would it look? I don’t expect absolute perfectly, but I would like to get as close as possible.

Let’s try out this attachment thing. This is what I’d like to get close to. I’ve already started paring down my polycount since I took this shot, and some of it’s turned out alright, it not a good bit rougher. But off the top of your head, what do you think I should bake, and what do you think I should leave as geo? You don’t have to get indepth about it, but a general boost in the right direction would help me out tons. 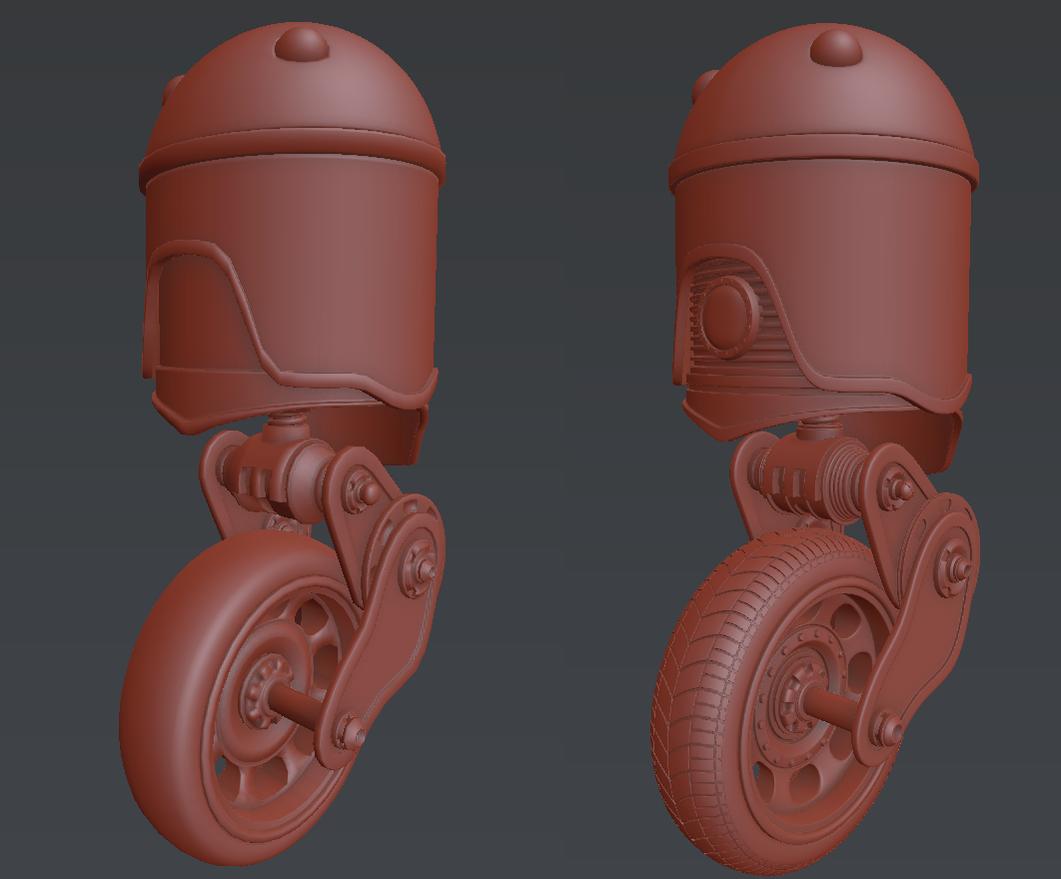 Now, the axel ends at the pivot points on the wheel attachment assembly-- at the angle shown, do not affect the silhouette, however, if the wheel were pointing toward the front, it seems like the ends of the axles would poke out beyond the plate they go through (part of the axle is recessed, but the recess doesn’t appear deep enough to keep some of the axle from sticking out.) So that would be a judgement call, and might depend on whether the wheel will every be seen at that angle. It might be possible to deepen the recess slightly to enclose more of the detail, and only have a simple capped cylinder sticking out at extreme wheel angles.

Alright. I did what you said, besides keeping some details on the caps to maintain their basic shape, removed all my constraint loops, and got it whittled down to a total of 13,720 tris. I won’t be able to get it any lower than that without making it look blocky. As-is, the silhouette isn’t quite as fine as it once was, but the difference is barely noticeable. I’d say I did a pretty good keep that intact, at least.

So next up: normalmapping. Without my constraint loops, my smoothing is all kinds of mushy. I’m hoping baking a normal from the highpoly original will fix that.

Orinoco, Silentrainstar, thanks for the help.