how to: 2 cylinders, only one has shadow

Newbie trying to learn about lighting and shadows. I have a scene with 2 cylinders standing on a floor. How can I have one cylinder casting its shadow on the floor, but the cylinder beside it does not? Otherwise, the 2 cylinders are identical. I have tried a zillion experiments (well, ok, more than a couple dozen anyway), turning on/off options left and right, and I have read many pages of documentation at blenderwiki and elsewhere, all with no success. There’s a simple on/off button to prevent shadows from falling on something, but nothing I can find for the opposite direction. Help!

I’m sure there are several ways to do this but here is one way. 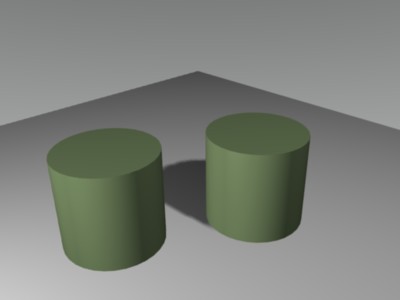 Thanks, g60, that’s just fine for my needs. And, it finally gives me a real reason to make use of layers (so far I’ve made nothing complicated enough to need them for organizational purposes). I would have never thought of using layers. Problem solved!

Since both cylinders seem to be sharing the same material, be sure to make the “shadowless” object’s material a single user copy (first button to the right of the material’s name field), then deselect its Traceable option (found on the Links and Pipeline panel).

I’m not sure that I would ever use such a setup but it is always an interesting exercise and sometimes I discover the function of a button I never use.

Check out the ShadBuf option next to the Traceable option. You can use that option when using buffered shadows.

I don’t think anyone will ever fully grasp Blender, especially at the current rate of development! Sometimes that’s depressing, sometimes it’s inspiring.

Still just learning like crazy, so I don’t have a good reason to use such a setup either. But, I always try to solve every problem my pointy little head comes up with. Ya never know! I don’t have a problem with not fully grasping Blender. I used 3dmax for about one year, 4 years ago, and it had tons of good docs and tuts. Blender is catching up fast. In either case, it’s a huge complicated program. I’m still shocked at such a powerful tool being totally free. It is truly awesome. Thanks for all the related comments to my original problem. I try to keep a sort of database of such ‘links’ for the someday when I need to use it.