How to animate an "endless" background loop or tunnel, or any other repeating object.

A couple ideas for animations I have involve a subject moving past other objects over a long distance.
For example a car driving in between buildings, or a person walking down a long tunnel. In both cases, the surroundings move past the subject and view port (assuming the camera stays with the subject). You could assume that it’s endlessly “repeating”.
I’m trying to figure out a way to animate that without having to model the entire length of the path.
I goggled this topic, and I searched on the forum, but haven’t come across anything.

One idea I had was to put together a bit of “repeating” background separately, render it, and then cycle it over and over in the compositor and alpha over my object there, but often I want the background lighting etc to influence the object I’m focused on as well. So in the end, I’ll have to have SOMETHING moving past the object.
Another idea, I thought of maybe doing the background in a “circle” and have it rotate but unless the radius is large enough, that will be visible in the animation.

Anyway…are there any “standard” ways to do this without having to model miles of surroundings/tunnels etc? I’d like to keep the scene complexity down if possible.

Any thoughts would be much appreciated.

Look to the array modifier. http://wiki.blender.org/index.php/Doc:2.6/Manual/Modifiers/Generate/Array

Thanks for the suggestion .The array modifier will help me model the repeating geometry, but I don’t want to make an “infinte” array, so I’ll have to array a finite number of instances. I’ve been doing some more reading and I think what I"m looking for is the cyclic modifier in the graph editor. It’ll work for things that go into and out of frame (And can repeat). A long hallway might be a different story , but I might still be able to make it work with creative lighting (making it darker in the distance).

By removing the caveat “endless” from the requirements the problem becomes more solvable. Lock down the shot length and plan the animation. Make one car move the entire length of your path. Then create your camera move to follow the car. At this point build up backgrounds as you see fit to fill in the blank areas that are in the camera FOV.

The Array modifier followed up with a Curve modifier can help with tunnels. You can get bendable tunnels that follow your path this way. Change the tunnel segment mesh to a street segment mesh to form a road. Use two arrays following the same curve for road inside tunnel.

Some of these bridges on Blendswap were created using the array technique. 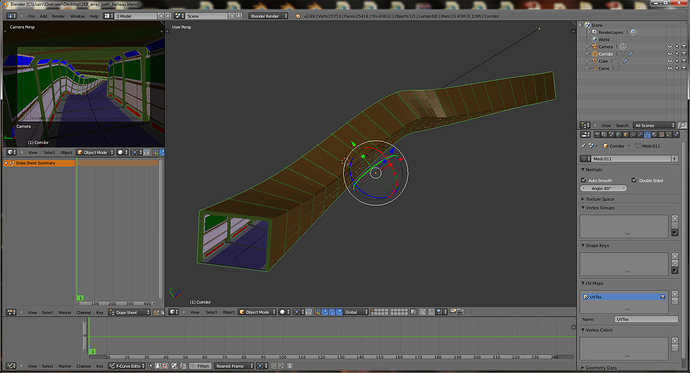 Thanks for the suggestion. I actually posted just before your post with more information, and an additional idea, but it likely won’t show up for a while because it has to be approved by moderators…because of the “lower than 10 posts” rule

Anyway, your suggests might work for some of my cases but specifically, I’m thinking of things moving at high speeds. So for example a Jet airplane moving between buildings (actually in the animation I’m thinking of making it’ll be a bird flying between flowers…so I need the flowers to be zooming past the bird)… so potentially the bird could cover a lot of ground between where it starts and ends in one continuous shot. I don’t need every object it passes to be unique so that’s why I was hoping to figure out how to do cycle that without actually having all the geometry there. (and with an array modifier, you’re still generating a very long piece of geometry which may be harder to manage in viewport etc). So the idea I had was to translate the objects past my subject (bird) (Which will stay stationary in world frame…plus minus moving up and down and side to side a bit) …and use I may be able to use the “cycles” modifier to have the objects loop back to the beginning and be scrolling by over and over. I tested this with simple cube translating past the POV of the camera in the default scene and it seemed to work well (The cube moves left to right past the camera…then jumps back to the beginning and does this over and over ).

Caveat: I may be over-complicating things. Like you said…if I plan my shot caerfully…I may not need to go too crazy with the background. It’ll just depend on the specific shot.