How to brighten lamp in Eevee/Cycles?

Hello! I’m very new to blender, but I’ve gotten the hang of the basics of low poly modeling and decided to make an antique gas lamp. The project was a lot more intense than I expected for my skill level, but I’m very happy with the result! However I’ve had some trouble with making the Lamp actually act like a light in a scene. 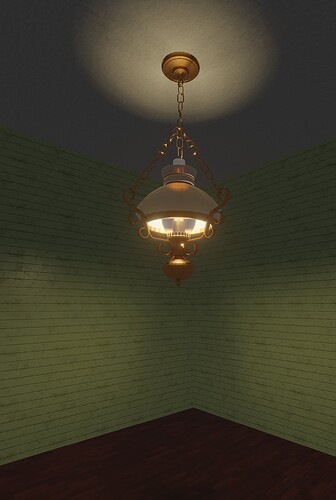 It doesn’t look that bad in Eevee, but it definitely could be brighter. I also think the world lighting(?) that Eevee has is doing a lot of work, and because of that the shadows aren’t that dark either. I have a little bit of contact shadows and ambient occlusion on, but not much. in cycles though you can’t really see the room at all! this is with the NLM denoiser on. I don’t know if OptiX would do better because Blender crashes when I try and use it. I blame that on my computer being kind of old. Turning off the Denoiser and things are less dark, but… still dark. also SUPER noisy 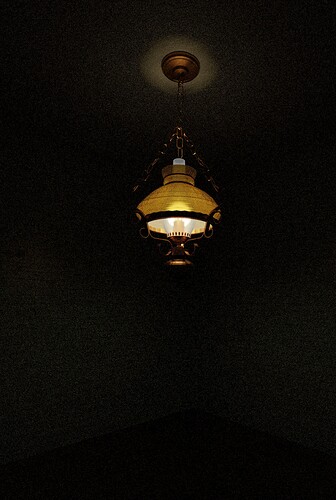 My cycles renders also take like an hour. Don’t know if that’s because my computer is old, my settings are wack, or my model is inefficient. 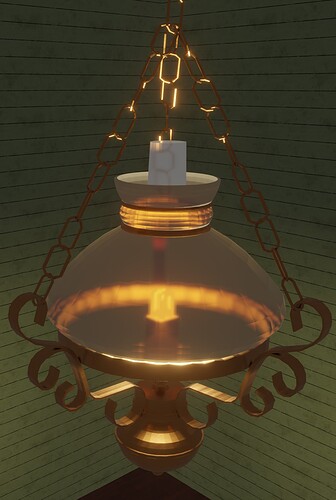 I have a little ‘filament’ glowing bit inside that’s acting as an emitter as well as a point light set at about 1k watts. pointing the camera inside it really is quite bright in there! I’m a little stumped as to whats going on. Also in Eevee i can’t see the one transparent object through another like whichever one is in front is the one it renders, it wont stack the glass even if they aren’t entirely transparent but that might just be an engine limitation.

Anyway, Thank you to anyone who can help me with any one of these issues. I would love advice for how to make the lighting work because I would love to use this model as a light in the future!

“An on-camera light fixture” is what is known as a “practical light.” It is an object that, in the real world, emits light. Therefore, we expect to see believable light effect being cast on appropriate nearby objects such as walls. However, in CG, that is actually two separate concerns.

(The implementations are different between Cycles and EEVEE because of the fundamental differences between these two algorithms, but the concern is not.)

A CG “lamp,” other than an emitter-surface in Cycles, is not a thing that can be seen. Therefore, in addition to the practical light, you need to add and appropriately aim CG lamps which are what will actually provide “illumination.” You don’t have to put the lamps inside the light – you simply need to make sure that they cast a plausible light pattern.

You also need to think about shadows, and, depending on your renderer, this, too, might be available as “a separate concern” through magical non-real things like “shadow-only spotlights.”

Of course, you also have to make the thing “light up,” but there are many ways to do that since that’s a separate concern from lighting the room.

Likewise in theater: the actor flips on a light switch, and an on-set wall lamp turns on. Precisely on cue, spotlights high above in the lighting loft do the same. You “accept” that the wall lamp did it, but for the most part it didn’t. The lighting designer did, when he placed and aimed all those spotlights in the loft. The result is plausible.

What you want is for your lighting setup to be “plausible, as computationally inexpensive as possible, and easily controllable by you.” The final result, whether or not technically perfect, should be suitably dramatic. And, as Zack said in “A Chorus Line,” “don’t catch my eye!” People will actually overlook things that are wrong as long as they’re not distracted by anything that is obviously wrong.

Yes, modern rendering algorithms can precisely model the behavior of real light rays. They can produce “physically correct.” But this is often unnecessary.

I don’t use Eevee, but for Cycles, make sure you use some kind of Light Path/isShadowRay → Shader Mix between 1) the main glass shader setup, and 2) Transparency shader. The problem is glass is opaque to shadow rays and have to rely on refraction caustics with tons of samples to clear properly - using the Transparency shader trick is a workaround for us inpatient people

Thank you for all the advice and analogies! The likening it to film/theater lighting actually helped me think about it differently. I’ve done such stuff before and know about how having a lamp in the scene serves as a practical light, but you’d still need to have a key light or something shining on that spot or from that direction. The light from the lamp isn’t enough to look realistic too the camera, even if it is ‘real’. Relying on just the lamp the scene would be dark, which is exactly the problem I’m having here.

So I first tried to sort of ‘fake’ the lighting on my own first. I added an Area Light off camera to act as a fill light for the scene. I wasn’t quite sure how to fake a hanging lamp, so my guess was to make another point light and extend the radius to exceed the lamp shade 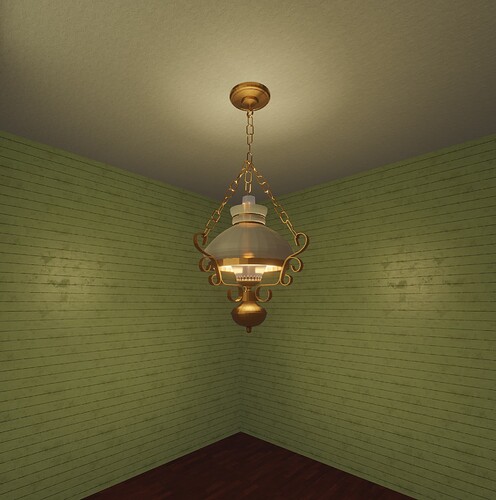 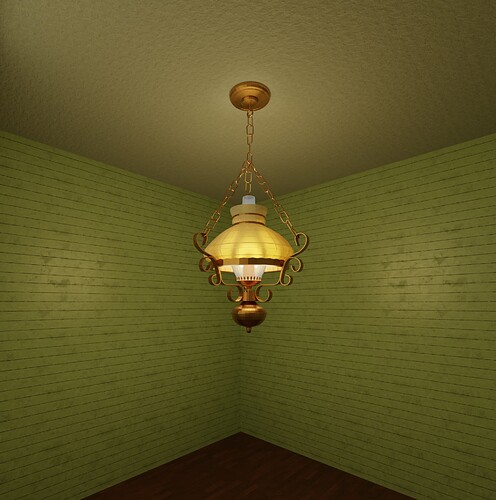 Both the scenes really brightened up a lot! and the light still largely looks like its coming from the lamp? though unfortunately some of the shadows from the lamp shade have been lost, I think I can work with this a lot better in general

So I wanted to try out your advice too! I wasn’t quite sure of the order, but I changed the order of some nodes for my glass shaders and added the ‘Light Path/isShadowRay’ you mentioned. I turned off the additional lights I added for the other fix and rendered in cycles with my setup otherwise like before. 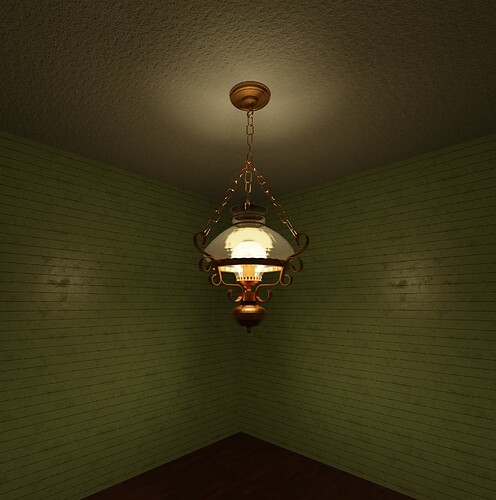 and it worked pretty well I think! Its actually lighting the scene decently now. There is some funkyness with the glass textures, but I think I would be able to fiddle with them and get a good result if I had the time to spend rendering. I also took a picture of the nodes and order they were in. 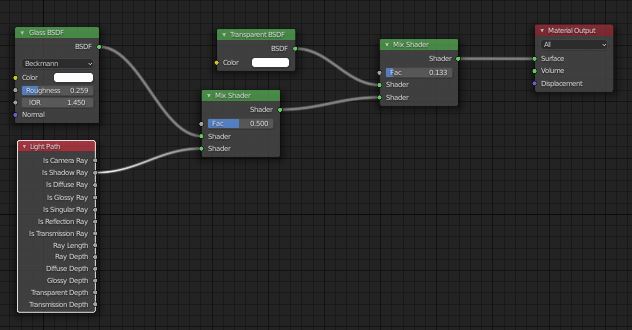 This is for the inner glass 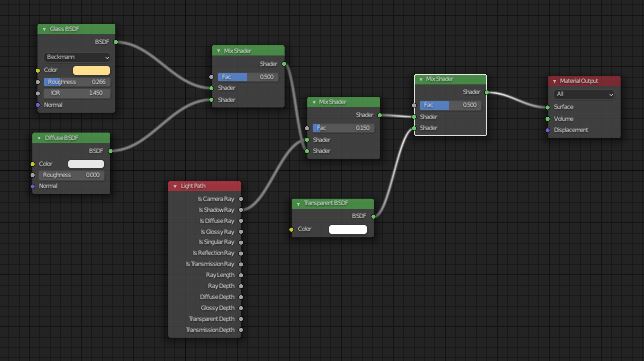 and the outer glass.

Given the good result I figure i did it correctly, but I decided I’d post this still so they could be checked and also in case anyone has the same issues as me.

I don’t think I’ll use this method right now because rendering in cycles takes sooooo long on my computer. But whenever I upgrade and I can do stuff in cycles more easily I’ll definitely keep this in mind!

Especially when you’re dealing with windows and the outside world, remember that there’s a very big difference between what it is, in the real world, and how it looks. Algorithms having to do with glass and transparency can be very expensive. While your first instinct might be to “look at what’s in the real world and build that” – and you certainly can build that – that’s not your only option nor necessarily the best one. You want: “good enough,” and “cheap.” (Shadows are expensive, too – do you actually need them?)

For instance, “a pane of glass” might be suggested just by a little gleam of what appears to be light reflecting off the surface – literally showing you where the pane is, and maybe a reduction in hue-and-saturation in whatever’s supposed to be behind it. You can fake that. It might put a so-called “gobo” (theatrical lighting term) in a pattern of light falling on the floor. You can fake that, too. As long as you don’t do something that is obviously, distractingly wrong, the viewer is going to very quickly accept what he sees on the screen. But you can save hours or days of rendering time in this way, while coming up with a result that looks – as my late uncle used to say – “good enough for peace work.”

Some shots are much more important than others. If the shot is only going to get a passing glance, it’s amazing what you can get away with. Star Wars® Episode One actually shipped to theaters with a crowd in a podracer scene that was made using colored Q-Tips® cotton swabs. No one noticed, because they’d seen a real crowd just moments before. (The shot has since been replaced, but at the time there was a deadline to be met.)

I added an Area Light off camera

Keep in mind that lights are not visible objects in Blender.

Let’s say that you have a table that just needs a little bit more light on it. You can place an Area Light right above it . The viewer doesn’t know it’s there because it is not a visible object.

They can be made camera visible since Cycles-X was implemented. Only the newer versions though.

Ooooh ok so I didn’t quite get it right. Thank you for the correction then!

They can be made camera visible since Cycles-X was implemented

I don’t have time for Eevee. Takes far too long to set it up to produce good enough results. And with color pickers not supporting color temperature, I’m left guessing at light color. I’ve used it for example animations, but it took ages to get something decent out of it. Even then, it’s sub par for not supporting a bunch of stuff I need, like velvet shading, anisotropic shading, and actual light transport through translucent surfaces (think semitransparent colored curtains tinting the room). I’ve tried some hacks, but, blah - nah…

I’m not sure if it’s true anymore, but lamps used to resolve faster to a solution than emission geometry. So I’ve always preferred actual lamps. But of course, then I also needed to add additional emission geometry for camera only, adding to the workload. Visible lamps can be textured to fake gridded lamps, but you can’t make them actual materials to show when they’re turned off. Again, adding to the workload. Not to mention the new angle falloff parameter is less than good, offering very few controls. So, while improvements are welcome, they don’t really do all that much for me other than having easy visible lights to play with early in the project that will need to be replaced further down the road.

The quality of my stuff is somewhere between South Park and Archer. A little cartoony. But it’s good enough for me.