how to create a rig that does not deform the mesh?

Hello to all, I’m looking for a way to unfold a solid but I really can’t find a way to constrain the faces to their original shape.
Here is the blend

I’ve tried with hooks to faces as you can see from the image above with a chain of parenting and as you can see the square is not a square any more!
I’ve also tried with an armature with independent bones and preserve volume checked with similar result (included in the blend)
I can’t really find a solution to make the rig to not deform the affected faces I just want to rotate the faces along their edges.
really looking forward to any advice from you, thanks!

Use bones. Just parent all the vertices of a face to the bone. When you rotate the bone the face will rotate with it. Don’t use autoweights

I’ve already tried that but I can’t make the bone head stick to the vertex (or the other way around), or I simply missing something…

If that doesn’t work, go to step 2

One face weighted by one bone only

Ahh ok now only one bone affects one face 100% it’s ALMOST good but not quite as you can see from the image they have different height at the end.

Sadly, and you are going to shout at me for sure, but you model is not drawn accurately enough for you rig to work as you want, also your vertex groups are not unique, some intermediate edges appear in two vertex groups. Sorry to be the bearer of bad tidings, but…

Here is a picture example of inaccurate construction: 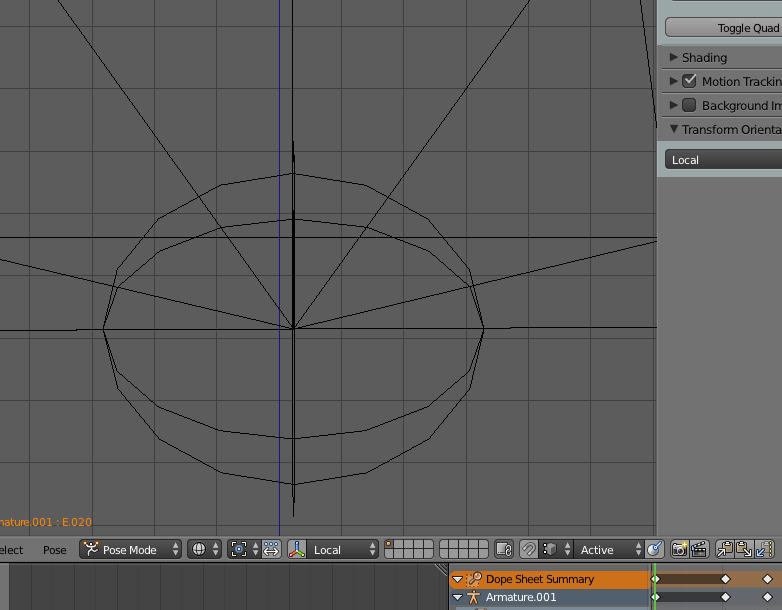 The bottom edge is not parallel to any axis, nor is the bone exactly on the hinge point. A redraw using increment snap might help, as would using precise measurements to make the surfaces, along with subdividing the hinge edge to get the bone exactly in the middle of the edge. This actually is not necessary since the location of the bone along the edge does not matter, what does matter is that the bone tail is coincident with the edge and the bone normal to the edge, but you have so many geometric inexactitudes that I feel you must correct these before anything else. The fact that you have intermediate edge lines assigned to two bones is not helping either. You can see this for yourself if you go to Edit Mode, then select none (key “a” twice maybe) then select a bone in vertex groups and click “Select” - clear selection and try again with another bone - you will see the problem. This model to work properly must be drawn 100% accurately. Sorry!

You only need to weight the vertices at the tip of each bone, those are the only vertices which are actually moving when you rotate the bone 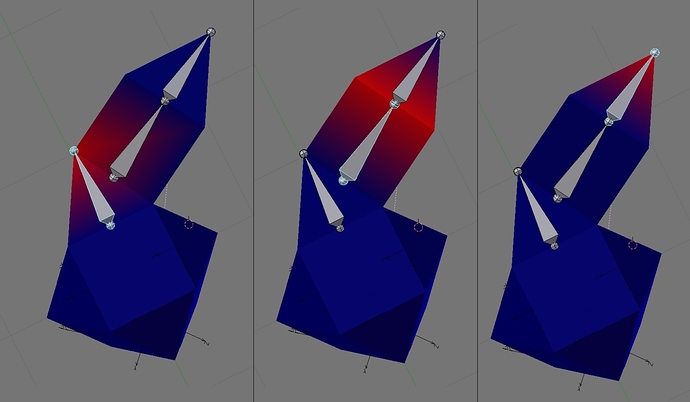 Also as stated above, bone placement is key to get correct rotation point

Richard yes this makes sense indeed I’ve corrected the weights, and made it again with new bones in other faces with just the correct vertex involved but STILL bad heights at the end like in your file.
Clock, don’t worry I don’t get offended quite the opposite you are taking the time to help me out but quite sincerely I don’t see the things you are pointing out!
First the solid was built by the extra object plugin and heights are all the same before transforming.
Second, the base and the tip of the bone are placed with vertex snapping and by placing the 3d cursor and snapping to it (I’ve repeated once again the process to be extra sure, and also confirmed by subdividing the edge, they are perfectly in the middle and the vertex tip, quite frankly I can’t understand what could be misplaced … The roll were made along global Z axis for the two bone at the base and along global Y for the tip
And how you made that screenshot it’s so zoomed in I can’t really understand where you made it, I would be really happy to understand what’s imprecision I’ve made
Here a simplified model

MY BAD! you are absolutely right the edge was indeed not straight!!! I’ve now remade the model from scratch and I see it behaves correctly now. It must be happened by the rotate gizmo and I didn’t realize .
Thanks so much for spotting it out!
cheers
Eli

You know this modelling of a geometric shape reminded me of school days long ago, we had a Technical Drawing teacher, Mr MacArthur or "Mac-the-knife " as we called him, a slightly built man with a large beard and a ferocious looking wife. He would ask - “What is a polygon?” “An empty parrot cage” we replied. “Oh grow up” he would say, happily that has never happened to me yet. At times he would draw some weird and wonderful shape on the chalk board, (it was in the 60’s) “What shape is that?” he would ask, playfully “tapping” some poor unfortunate boy around the back of the head with his metre long wooden ruler. “A nonagon”, or whatever we would answer, unless we had had too much red meat, in which case we would proffer “A dildodecahedron, Sir”.

“A dildodecahedron, what in God’s name is that?” he would bellow. “T’is the accepted cross-sectional profile of the battery powered ladies humming stick, Sir” we would venture. “A ladies humming stick, what the deuce is that boy?”. “Perhaps you should enquire of Mrs MacArthur, Sir” one brave soul would say. This brought two reactions; the first would be that the nearest boy was cuffed around the ear with the back of his hand, we tried to arrange things so that the same boy always copped it, the one who never got into trouble and least deserved the gratuitous violence. Secondly the pitch of his voice would rise by at least three octaves and would remain like this for 10 minutes or so until normality prevailed.

Sadly we never knew whether he made the enquires of Mrs MacArthur or not, but bearing in mind we never saw him in school with the demeanour and look of someone who had recently had the living crap kicked out of them, we suspected he had not. We tried to imagine the conversation as follows:

Mr. Mac-the-knife: “Well dear , oh lovely tea by the way, some of the boys suggest I ask you the nature and purpose of a ladies humming stick”
Mrs. Mac-the-knife: “What!!! the… bloody…!!!” she begins to turn redder by the second, steam emits from her ears and nose, she begins to assault Mr Mac around the privates with a large ceramic rolling pin, etc. etc.

Oh happy days, and who said Blender was boring.

I almost forgot the rotational angle and therefore the obtuse angle of the sides of said shape is 54.7356 degrees, in case you wondered. The included angle between faces is therefore 125.2644 degrees. Just thought you might like to know this. Cheers. Clock.